I have a psychological interest in all things scary. Can't stay away from them. Tell me about a psychopath or a serial killer, and I guarantee you my undivided attention. It being nearly Halloween, I settled for ghosts.

The Langham Hotel, England's first "grand hotel," built in 1865 in the style of a Florentine palace, boasts the following ghosts:

Here's the BBC connection: The Langham is just opposite Broadcasting House, home of the BBC. After World War II, several rooms on the third floor were kept as accommodation for BBC journalists who for whatever reason had to stay over night. Skeptics have suggested the ghostly encounters were concocted by BBC journalists to get out of deadlines.

Now I must confess, while I'm frightened of all sorts of things, ghosts are not high on my list. But here's what I wanted to know: what creates a spooky feeling? Room 333 seemed like a perfect place to start. Who knows, maybe I'd even get spooked myself, in which case I could conveniently be the object of my own research. I arrived at the Langham Hotel armed with Freud's 1919 essay, "The Uncanny," his study of the feeling of spookiness

I imagined that when I checked in and told the desk clerk that I'd reserved Room 333, I'd get one of two responses. He'd either downplay the lurid tales. Or he'd ham it up so I'd get my money's worth out of the adventure.

What I got, however, was terror. He stared, as though he was replaying in his mind all the horrors that had taken place in my room. "My hands are starting to tremble," he apologized. "Do you mind if I collect myself for a moment?"

"Actually, most people try to avoid it. Sometimes we have to put people there, but they're the ones who don't know about the stories. Me, I wouldn't even step foot on the third floor. I believe in those things. I don't want to take the chance of bumping into anything. Especially now. This is the time when ghosts are most active."

The porter was somewhat more comforting. As he carried my bag down the empty halls on the third floor, he said, "I'm on this floor all the time. I work the night shift and haven't heard or felt a thing. Of course, some people are frightened by the number 333 because of, you know, that exorcism movie." (Note to self: Google exorcism and 333.)

As he was letting me into my room, several more porters suddenly materialized. They huddled around the entry to my room like ants drawn to sugar. I noticed no one stepped inside the room. Maybe they just wanted to catch a glimpse of me, so later they could tell the story of the unfortunate accident that took place in room 333 with more credibility. "She had long auburn hair and was murdered on this very spot." Or, "She seemed fine when she first arrived, but in that room she fell into a fit from which she never recovered."

As my seemingly rational porter showed me my room, he unexpectedly warned: "By the way, if you even touch anything or move something around in the mini-bar, you have to pay for it." Had my name gone out on an international list or something? Okay, so maybe once in a while I take a Diet Coke out of the mini-bar, consult the outrageous price list and put it back. But this seemed a bit harsh.

"Look," the porter said, opening the closet doors "No ghosts... But just in case, if you have any problems, call the operator. Or better, yet. Call me directly. It'll be faster."

The room was pretty unremarkable. A lot of dark wood furniture, dull checkered carpeting, a couple of prints, heavy flowery drapes, a nice, plump white comforter on the bed.

In the bathroom hung his and her bathrobes. One sleeve had a large disconcerting brown stain, like, say, the color of dried blood.

And there was a large gilded mirror, which I tried to avoid. Here's the extent of my knowledge on this subject: Vampires don't appear in them; ghosts do. As I recall from the movies, either a phosphorescent ball appears behind you or a faint shadow or a butler with a big gaping wound on his face.

On a table opposite the bed was a book commemorating the 140th anniversary of the hotel. In it there was a list of famous guests: Oscar Wilde, Mark Twain, Noel Coward, Somerset Maugham, Henry Wadsworth Longfellow, Sir Henry M. Stanley (of Stanley and Livingstone), Charles De Gaulle, George Orwell, Antonin Dvorak and on and on. There was also a weak joke: "All good places have ghosts, and the Langham is no exception."

Did I mention the room was freezing? I crawled into bed and listened. I expected to hear noises, if only regular hotel noises. But there wasn't a sound. Never mind no bumps in the night. There were no footsteps of other guests walking down the hall or whispered conversations or doors being tried. Nothing. Was it possible the third floor was deserted, except for me?

Hotel rooms are just naturally creepy places. ... I mean, how many people have slept in that bed before you? How many of them were sick? How many were losing their minds? How many were perhaps thinking about reading a few final verses from the Bible in the drawer of the nightstand beside them and then hanging themselves in the closet beside the TV?

He observed that a spooky (uncanny) feeling -- like the one I was having right now - isn't the same as a frightening one. It also involves the feeling that something is familiar and unfamiliar at the same time. There's something déjà vu about it. It's the resurfacing of childhood feelings that were repressed, felt "in the highest degree in relation to death and dead bodies, to the return of the dead. And to spirits and ghosts."

This is because when it comes down to it, nobody really believes they die. The unconscious repudiates death.

It is true that the statement 'All men are mortal' is paraded in text-books of logic as an example of a general proposition; but no human being really grasps it, and our unconscious has as little use now as it ever had for the idea of its own mortality.

Then came the kicker:

The primitive fear of the dead is still so strong within us and always ready to come to the surface on any provocation. Most likely our fear still implies the old belief that that the dead man becomes the enemy of his survivor and seeks to carry him off to share his new life with him.

In other words, Freud points out that the line between believing and not believing is not so firm.

This was not great news for the guest in room 333 at the Langham.

I put down Freud and turned to Google. Discovered the number 333 somehow represents the Holy Trinity. Double it, and it's the number of the devil. Then there's the proposition that 3:00 a.m. is the opposite of 3:00 p.m., the miracle hour when Christ is supposed to have died, making 3:00 a.m. the demonic witching hour. And of all the minutes in that hour, 3:33 am is considered by some to be the devil's favorite time of day. Great.

Kept the lights on and watched the clock. Finally, 3:34am. Nothing. No bloodcurdling shrieks. No ghostly moans. No demonic howls. No smell of sulfur. No objects floating around. I felt disappointed. I had paid a lot for this room.

Feeling emboldened, I took a quick peek out into the corridor. Not my best idea. In the hallway was a sign: 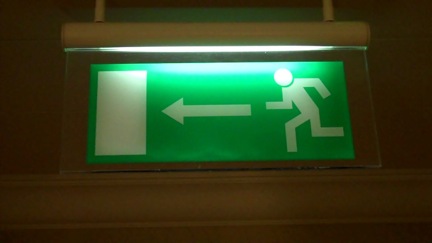