During American Ballet Theatre's Metropolitan Opera House season, it's rare to see a dancer who is still a work in progress perform a leading role. The company can't afford to take risks when it needs to fill the cavernous Met every night. There's no time to test out dancers who might not be ready to carry a ballet. ABT knows what it needs: international stars, and lots of them. This season the company has imported a solid percentage of its principal roster, with names like Diana Vishneva, Natalia Osipova, Alina Cojocaru, Polina Semionova and Ivan Vasiliev dotting its casting sheets.

So when a young ABT soloist does get a Giselle or a Juliet, it's a big deal. These dancers aren't dropped, fully formed, in front of us. We've watched them grow up at ABT -- spotted them in the corps de ballet early on, tracked each of their hard-earned solos, speculated about when the promotion might come, kvelled when it did. They're our hometown heroes, and when they're given a chance to stand center stage, we root for them.

Last week I saw three soloists -- Isabella Boylston, Misty Copeland and Hee Seo -- get that chance in La Bayadère. In a way Bayadère is a good place to test out budding primas, because it doesn't rely on a single ballerina to carry its story. Instead that burden is almost evenly shared between Nikiya, the beautiful temple dancer (bayadère), and Gamzatti, the scheming Radjah's daughter. (Seo's Nikiya was cast opposite Boylston's Gamzatti on Wednesday night; Copeland's Gamzatti went up against Alina Cojocaru's luminous Nikiya on Thursday.) 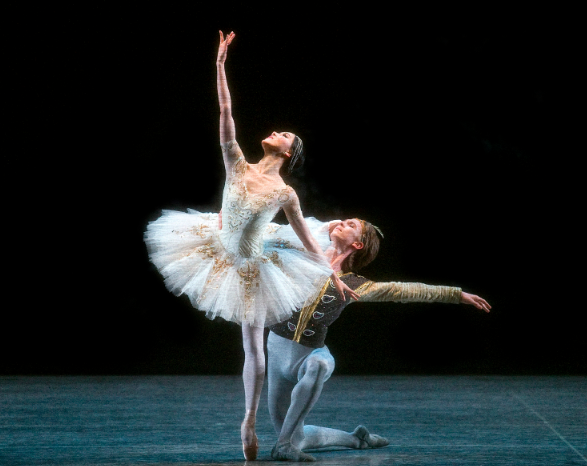 But this is also a ballet that suffers without star power. Its story, set in the awkwardly racist world of Royal India, borders on the ridiculous. Solor, a warrior, finds himself in a love triangle with Nikiya, to whom he's pledged his love over the sacred fire, and Gamzatti. Gamzatti kills her rival by hiding an asp in a basket of flowers; the grieving Solor has an opium-induced dream of Nikiya in the Kingdom of the Shades. Tormented by continuing visions of Nikiya, Solor nevertheless marries Gamzatti, which causes the temple to collapse as "the vengeance of the gods is unleashed." Nikiya and Solor are reunited in death. Get that? No? It takes the powerful persuasion of veteran dancers to smooth over the lumps and bumps in this narrative, to transcend its sillier moments and convince us that its characters might be real people. In the Seo-Boylston cast, without a high-wattage star to distract us (Vadim Muntagirov's elegant but vapid Solor was no help), the weight of this lumbering, overstuffed extravaganza felt terribly heavy.

And yet -- how brilliant these young dancers might be someday! Boylston, Copeland and Seo are all blessed with extraordinary facility. Seo in particular has the sort of gorgeous line you could just drown in, plush and luxurious. Boylston, a confident performer, has a huge, explosive jump. Of the three, only Copeland really knows how to command the stage. She has mastered Gamzatti's considerable technical challenges, but you don't see her thinking about them as she dances. Her Gamzatti is cunning and feline, more than a little desperate, always just about to erupt. The other two dancers are straight-A students -- they've done their homework, and know exactly how everything should look -- but seem overly self-conscious onstage. I think they just need time to relax into these roles, to familiarize themselves with the spotlight. (Maybe promoting them to principals would help?)

ABT also has one of the most lavishly overqualified corps de ballets in the world, stocked with dozens upon dozens of beautiful dancers. Though they're usually relegated to "living scenery" roles, Bayadère offers them a chance to shine. In the Kingdom of the Shades, 24 corps women in white tutus (the Shades) descend from a long ramp, performing a simple but exacting series of arabesques. When danced well, it's a transcendent scene, and ABT's corps manages it all with nary a wobble. But it's a quieter moment that haunts me: All of the Shades rise to their pointes and bourrée in place, the tiny motions of their feet setting the crystals on their tutus sparkling. For a few seconds, they are elevated to some higher plane. They are living moonbeams. 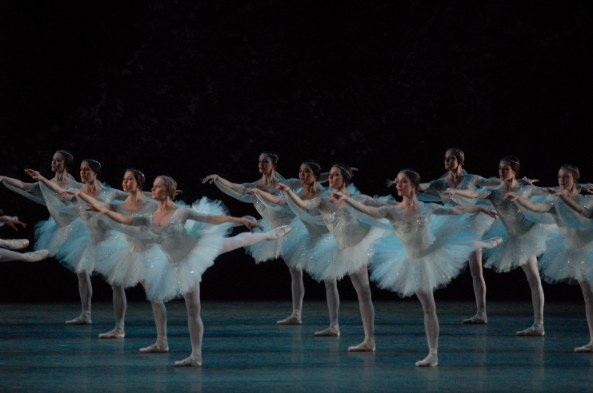 ABT in La Bayadère's Kingdom of the Shades scene. Photo by MIRA.

--------
A former dancer and choreographer, Margaret Fuhrer is an associate editor at "Dance Spirit" and "Pointe" magazines.