The sign (pictured below) outside Roots Bistro in Houston was reportedly up briefly on Saturday before it was changed, according to the Houston Chronicle. 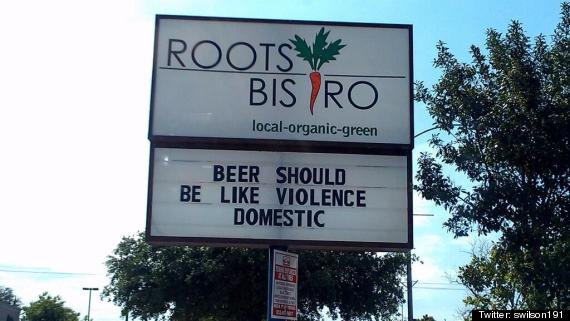 Kenneth Choate, who helped open the organic restaurant a year ago, said one of the employees "apparently found the expression when he googled 'best business signs,'" the Chronicle reported. That was apparently all it took for the unnamed employee to conclude the sign was a good idea.

Choate claims that the expression was only up for 10 minutes. That was all it took for a passerby to notice and take a photo of it and tweet it, thereby setting off a multimedia firestorm and a major headache for the restaurant.

"Obviously no one here would condone any type of violence, domestic or otherwise," Choate told the Houston Press. "We completely deserved the backlash, and I can't be mad at anyone but myself."

Houston resident Kyle Nielson told KTRK that he protested outside the restaurant for several hours to show his disgust with the sign.

"Domestic violence is something that happens hidden away in homes, and for somebody to promote it publicly -- even as a joke -- is an outrage," Nielson said. "It is absolutely ridiculous."