Long before Rosa Parks was hailed as the "mother of the civil rights movement," she wrote a detailed and harrowing account of nearly being raped by a white neighbor who employed her as a housekeeper in 1931.

The six-page essay, written in her own hand many years after the incident, is among thousands of her personal items currently residing in the Manhattan warehouse and cramped offices of Guernsey's Auctioneers, which has been selected by a Michigan court to find an institution to buy and preserve the complete archive.

Civil rights historian Danielle McGuire said she had never before heard of the attempted rape of Parks and called the find among Parks' papers astounding.

It helps explain what triggered Parks' lifelong campaign against the ritualistic rape of black women by white men, said McGuire, whose recent book "At the Dark End of the Street" examines how economic intimidation and sexual violence were used to derail the freedom movement and how it went unpunished during the Jim Crow era.

"I thought it was because of the stories that she had heard. But this gives a much more personal context to that," said McGuire, an assistant professor of history at Wayne State University in Detroit. Her book recounts Parks' role in investigating for the NAACP the case of Recy Taylor, a young sharecropper raped by a group of white men in 1944.

Of her own experience, Parks wrote, "He offered me a drink of whiskey, which I promptly and vehemently refused. . He moved nearer to me and put his hand on my waist. I was very frightened by now."

"He liked me. .. he didn't want me to be lonely and would I be sweet to him. He had money to give me for accepting his attentions," she wrote.

"I was ready to die but give my consent never. Never, never."

Most people know the story of Parks, a black, middle-aged seamstress who refused to give up her seat to a white passenger on a bus in Montgomery, Ala., in 1955. Guernsey's President Arlan Ettinger said her personal papers reveal a much more complex individual, one who spent a lifetime fighting for racial equality and against the sexual violence of black women.

Parks is credited with inspiring the civil rights movement with her solitary act of defiance on Dec. 1, 1955, that led to the Supreme Court outlawing segregation on buses. She received the nation's two highest honors in her lifetime, the Presidential Medal of Freedom and the Congressional Gold Medal of Honor.

She died in 2005 at age 92, leaving the trove of personal correspondence, papers relating to her work for the Montgomery branch of the NAACP, tributes from presidents and world leaders, school books, family bibles, clothing, furniture and more – about 8,000 items in all.

"It is wonderful and breathtaking," Ettinger said. "It will be up to the institution that ends up with it to make this material known to the world."

Proceeds from the sale will go to resolve a dispute over her estate, divided between her relatives and the Rosa and Raymond Parks Institute for Self Development that she created in 1987.

Guernsey's, known for its sale of iconic and celebrity collections, took an inventory of Parks' homes in Detroit soon after she died and is looking for an institution to buy her archive, which Ettinger described as the most complete he's ever seen.

The only thing missing, he quipped, is the bus itself. The bus is in The Henry Ford, a museum in Dearborn, Mich.

Parks worked on many cases with the NAACP, including the Scottsboro defense of nine black teenage boys accused of rape in Alabama in 1931. She was involved in the black power conventions in the 1970s and the anti-apartheid movement in the 1990s.

Parks wrote on anything she could get her hands on. The backs of church pamphlets and NAACP flyers are filled with her thoughts and observations.

There are detailed notes on how African-American citizens should comport themselves during the bus boycott following her arrest that lasted 382 days and about the organization that led it, the Montgomery Improvement Association, headed by a young pastor named the Rev. Martin Luther King, Jr.

Elsewhere, she laments about life under the oppressive Jim Crow laws and asks what is wrong with the world when her jailer refuses her a drink of water.

She also vividly recalls an incident when she was 10 years old involving a white boy who threatened to hit her. Demonstrating some of the determination she exhibited on the bus decades later, Parks writes "I picked up a small piece of brick and drew back to strike him if he should hit me. I was angry. He went his way without further comment."

Parks' memoirs include one with author Jim Haskins and another with one of her attorneys in the early 1990s, but by then said McGuire, "her story was pretty much well-rehearsed, and limited to her time in Montgomery and the bus incident."

"Her story had become mythic and iconic ... I can't imagine what that felt like for her to have a whole history of activism and political work erased and turned almost into a cartoon character," said McGuire.

Guernsey's has talked to about 20 museums, libraries, university and churches about buying the archive over the past three years.

"There hasn't been a group that didn't desperately want it but had to face the reality whether they could afford it," Ettinger said, adding that he was currently in discussions with three separate entities – an institution and two individuals who could buy the archive with the intention of donating it to a museum or other cultural institution.

He declined to give an exact figure but said $8 million to $10 million was in the "ballpark."

The Schomburg Center for Research in Black Culture, a research library of the New York Public Library, was among the interested institutions.

Its new director, Khalil Gibran Muhammad, said the center has very little material on Parks and would love to own some of her papers but because the archive is being sold as a single collection, it took the Schomburg out of the running.

"She is a witness to the beginning and the maturation of the civil rights movement. . She walked as close to Martin Luther King Jr., as you can get at the beginning of the movement," Muhammad said.

McGuire wondered why Parks omitted the attempted rape incident from her memoirs but included the story about the little boy who threatened her.

"It shows some kind of conscious effort in shaping her own legacy but also, I think, speaks to the issue of respectability. She doesn't necessarily feel comfortable telling the world about what happened," she said. "But she's contemplating telling people about it because she's written it down."

Read part of Rosa Parks' essay in its original form: 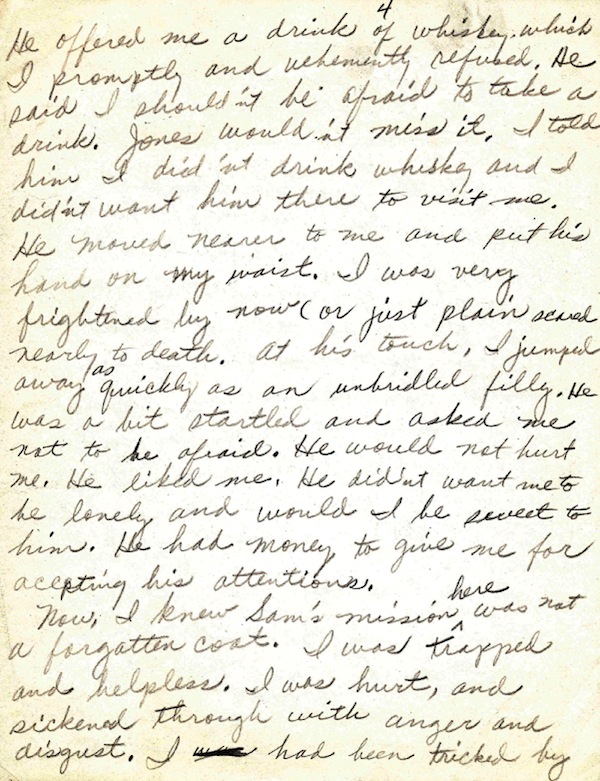