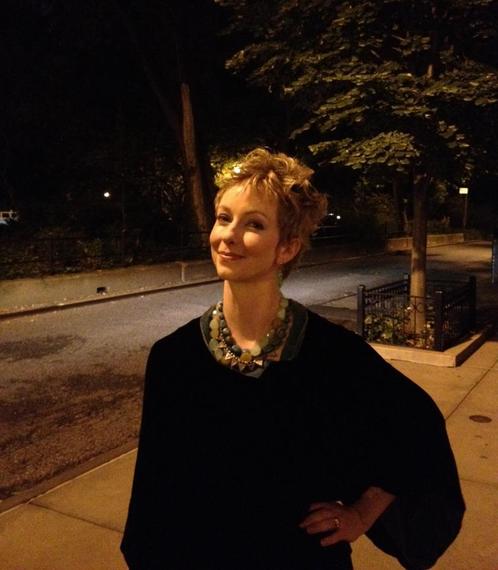 The thing that makes Rosalie O'Connor's animal portraits compelling is their charming blend of humor and affection. You can feel just how much she loves animals. Whether they are at play or rest, she seems to be able to capture something essential about her subjects' inner lives. Her portraits are full of spontaneity and expressive vitality. There's playfulness and silliness as well as moments of reflection and repose. Launching NYC Menagerie, her pet photography venture, is the culmination of O'Connor's lifelong love of animals and photography. As she tells it, she began taking pictures of animals with a Kodak Instamatic when she was a little girl in her native New Orleans, shortly after she started studying ballet.

In the early going, ballet won out and O'Connor moved to New York City as a teenager to study at the School of American Ballet but she never stopped taking pictures. Even during a fifteen year career dancing with American Ballet Theatre she continued to take pictures. Whenever she had a day off she carried her camera along and explored whether at home or on tour. It was only in 1996, when American Ballet Theatre was preparing to create a website and she was invited to contribute her work in the form of a photo journal that she began to seriously consider dance photography. It was her ninth year with the company and she had no plans for what she was going to do after she was done dancing. She was initially reticent but realized that it was a rare opportunity after talking it over with friends.

While recuperating from a serious injury over a period of nine months in 1997, O'Connor picked up her camera and began taking dance photos of her colleagues at ABT full time. It allowed her to maintain a sense of connectedness to ballet and begin building the bridge into her next career, photographing dance. A 1999 New York Times profile by Jennifer Dunning that focused on her dance photography sealed the deal. Rosalie O'Connor was suddenly an officially recognized dance photographer. She continued to dance for another six years but there was no longer any question as to what she was going to do after she hung up her pointe shoes.

She is now a widely celebrated dance photographer working with dance companies across the country in addition to her work as the staff photographer of American Ballet Theatre. She is the company photographer for the Aspen Santa Fe Ballet, Ballet Arizona, Boston Ballet and Tulsa Ballet. As a former ballet dancer, O'Connor knows how to take the picture at the precise moment and at the right angle to make the shot perfect. This makes her life hectic as she is in demand all the time to photograph performances and do portraits for dance schools. There isn't anyone that dance teachers trust more to show their students at their best. Directors of dance schools all around the city speak of her in nothing but superlatives. The problem is that she is actually too much in demand and has been traveling constantly for the last few years due to her packed schedule. She has decided to throttle back on traveling a bit and came up with the idea of NYC Menagerie as a way to do more of the work she loves at home in New York City.

On a recent shoot at the home of Franco De Vita and Raymond Lukens, O'Connor deftly divided her time between chatting with the couple and photographing their two cats, Dolce and Gabbana. That the director of American Ballet Theatre's Jacqueline Kennedy Onassis School and his partner -- who also teaches at the school -- should have two such fabulously named cats is no surprise. Their home is a reflection of their lifelong aesthetic pursuits. The photos, art, books and knickknacks were all chosen with special care that exudes both comfort and good taste. Their cats were chosen with less planning.

Getting the cats to perform in the middle of the day is no easy matter. This would normally be nap time but O'Connor came prepared with toys and casually tossed them on the floor. Then she let their natural curiosity take over. As the cats began to investigate the newcomer with her camera, Lukens and De Vita related the tale of how Dolce and Gabbana came into their lives during their tenure with the Boston Ballet School. O'Connor worked her magic at eye level with the animals and drew them to her with her calm presence. They had been prepared to spend money to replace the pets that had passed away but Franco was smitten when he visited an animal shelter and Dolce rolled over on his back to have his belly stroked. When they learned that the kitten had a sibling, Gabbana had a new home as well. De Vita believes that it is the animals that select their owners. 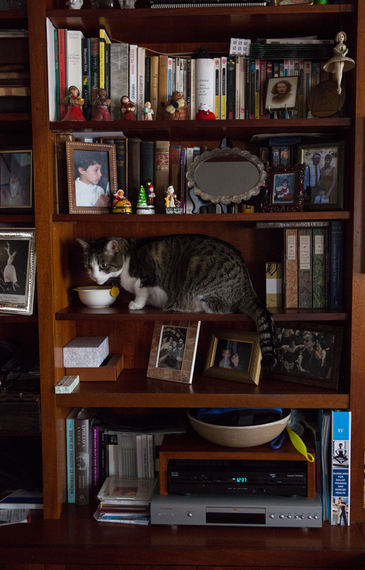 Dolce likes to take his meals up on a bookshelf next to the collected works of Henry David Thoreau and turns it into a fine photo op. Gabbana is more of an indolent lounger. Whatever the cats do, O'Connor tracks them and remains involved with them, coaxing them into the light that filters in through the windows. By their level of engagement, it is clear that the animals are enjoying the attention. It's no mystery why. O'Connor's presence is warm and gentle. One can easily imagine that it would be pleasant to spend many hours with her. Toward the end of the hour-long session, O'Connor managed to charm all four onto the sofa for a group portrait and there was a great outpouring of affection. She understands how much people love their animals and she captures it on film.

There are differences between photographing animals and dancers. For one thing, when photographing pets, she doesn't have to worry about making sure that the lines of the room are perfectly squared up like she does with a dance performance photo. Animals, she feels, never look wrong or out of position. They don't need to conform to the absolute demands of the geometry of classical ballet. They simply are themselves and that is beautiful and more than sufficient. With dancers she has to be concerned about facial expressions, positions of the fingers, tension in the neck, and a hundred other details. Animals are free to be themselves and are not self-conscious about it. 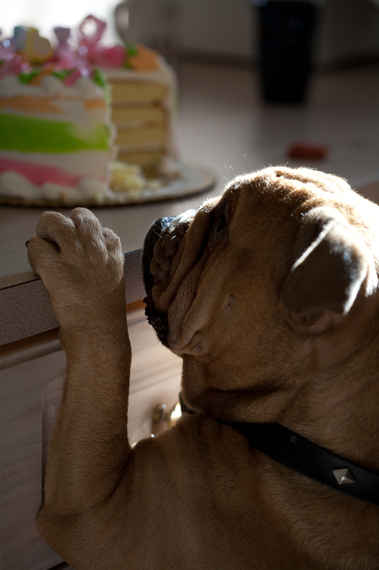 Angus longs for some cake; photo by Rosalie O'Connor

There are some similarities in that she has to have a sense of timing and anticipate where an animal is going next to capture it in action. Overall, she finds it less stressful and she loves hearing the stories about how animals and their owners came together. The most important thing to her, when she's working with animals, is to capture the connection between pets and their owners. That's something that pet owners can't do for themselves no matter how many snapshots they take. She also brings her photographer's eye for composition to her work with animals and that elevates the portraits into the realm of the beautiful.

Narrowing down the selection of pictures to feature for this article probably says as much about O'Connor as anything else could. First she had to check with all of the animals' owners to make sure it was okay. Then she was concerned about the ones she had to leave out because they were so dear to her. Asked for ten photos, she sent fifteen and said that someone else would have to do the fatal final cutting as she hadn't the heart for it. She had a story to go with each of the animals and where she encountered them. She brings such dedication to her work that it's impossible to imagine that she won't be as successful with NYC Menagerie as she has been with her dance photography. 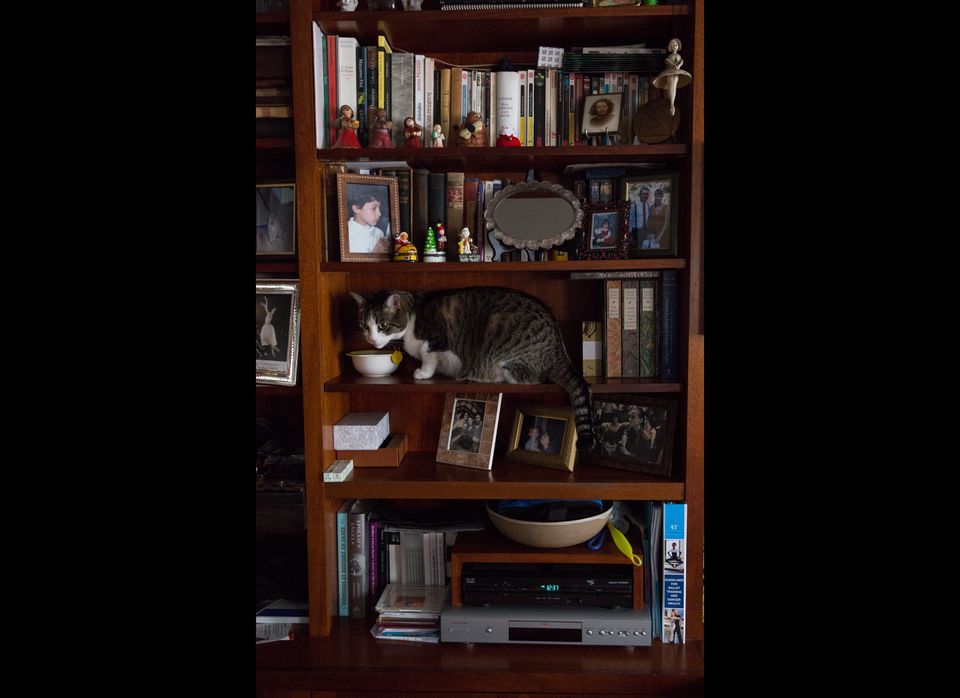