Five years ago, Rosanna Pansino was just a face in the crowd in Hollywood. Now she's one of the most recognizable faces on YouTube, where 6 million people - many of whom are young girls - subscribe to her Nerdy Nummies baking channel.

Her channel has attracted more than a billion, with a B, views.

The traditional over-the-air and cable networks would kill for those kinds of Carl Sagan-like numbers.

For now, Rosanna, 31, is strictly a YouTuber, part of a small community of individuals who produce their own content for what could be termed a stealth medium.

Girls who bake, girls who display makeup, girls who talk about clothes, guys who do trick basketball shots, guys who show other guys how to play computer games...this is the entertainment wave of the future.

Together, we have watched dozens of baking and tasting competition videos with Rosan-na and her sister Molly as well as fellow YouTubers.

Rosanna has just published her first cookbook, The Nerdy Nummies Cookbook: Sweet Treats for the Geek in All of Us (Atria Books).

Michael: With all due respect, you don't really strike me as a nerd.

Rosanna: I never called myself that, but it's what other people called me. The things I enjoyed growing up were considered nerdy at the time. I loved reading, science, video games, math and took AP Calculus in high school. I was very studious and did not party or have a very big social life outside of a few girl friends in sports. I also had braces, if this helps to paint a picture.

Michael: I see the picture. So how does a girl with that background suddenly leave Seat-tle, her family, and everything she knows to go to Hollywood?

Rosanna: I fell in love with and have always been fascinated by the entertainment indus-try. In high school I participated in drama club and theater. Although no one in my family worked in entertainment it's what I wanted to do more than anything. I decided to pursue it after college, so I moved to Los Angeles and took any oddball jobs I could find. In col-lege I worked 4 jobs at a time to make sure I graduated with no student debt and did the same thing once I got to LA.

I worked as a hand double for the show Ghost Whisperer. Not for Jennifer Love Hewitt but the boy who played her son Aiden in the show. I was a stand in, an extra on Glee for two seasons, and even a Production Assistant. I wasn't the best PA though because I used to mess up all the coffee orders.

Rosanna: While working as a union actress I had health benefits and things were going well. The only problem was I just wasn't being creatively fulfilled. While I was on set I was grateful for the experience but I didn't have any sort of outlet for creating content. So, I started creating videos online. I chose not to wait for opportunities but to create my own.

I was encouraged by my now manager Mike Lamond, who was a YouTuber as well, to start creating my own content. YouTube allowed me to be my own producer, my own editor, and my own creative director. I wasn't sure if YouTube was going to work out for me, but it reminded me of all the video production classes I took in high school. I origi-nally started with vlogging, which helped me get more comfortable in front of a camera. I used to fear being in front of a camera but now I love using them to connect with my viewers.

Michael: Your agent gave you an ultimatum and said that if you didn't drop YouTube he was going to drop you. Did you take him seriously when he said that?

Rosanna: Their office called me for an in person meeting and explained that as a compa-ny they are focusing on more traditional projects. While I wasn't making a dime on YouTube at the time my growing community felt real to me and that was something I wanted to focus on. Because of this we decided to go our separate ways.

Michael: You lived on a couch in L.A. for the next year?

Rosanna: I lived in a three-bedroom apartment with five friends and 3 cats. Working on my videos every day I was eventually able to save up enough to move into a less cramped space so I wasn't always taking up the entire kitchen with my baking creations.

Michael: Rosanna, it was your entrepreneurial nature.

Rosanna: I was talking to some entrepreneurs and they all said that at some point, to be successful, you have to take a risk on yourself. That really resonated with me.

Rosanna: Absolutely. Some weeks, it's 100 hours. I don't think that's ever going to change for me. One thing my dad instilled in me is a strong work ethic and its something I've always enjoyed. I have so many new projects I'd love to do.

Michael: What do you delegate?

Rosanna: When I first started YouTube I was a one-man production company. I would bake everything, do conceptual design, film, edit, post and promote my videos, the whole deal. Now, five years later, I have eight full-time employees. We're a very small, strong team. Family is something that's very important to me. My sister, mom, dad, and brother-in-law are all a part of the company.

Michael: And it all works out? No stresses and strains?

Rosanna: I know some families would have a hard time working together but my family are all very close. I find it's a huge benefit and asset to have people you know you can trust.

Michael: Where did the idea for the Nerdy Nummies cookbook come from?

Rosanna: Creating a cookbook is something I've always thought would be a lot of fun. Over the years I started to get hundreds and thousands of requests to do one. The requests slowly started to turn into demands, and that's when I knew the time was right. I have al-ways been a very visual learner so I wanted to make a book that not only explained how to make fun themed treats, but also showed you. Each recipe has at least 6 step-by-step photos, with a total of over 420 full color photos in the book. It's something I worked for over a year on and hope people enjoy.

Michael: You're at WME now.

Rosanna: WME is a talent agency that has believed in me for a long time. Many tradi-tional talent agencies are starting to see the potential of digital talent and have really started to support them. It's been amazing seeing them get on board with online enter-tainers.

Michael: So much of today's entertainment is on YouTube, not the networks.

Rosanna: Digital stars or digital celebrities are the newest form of entertainment. I still feel like an underdog in entertainment, because it is so new, but I love it. I'm so excited because YouTubers and digital talent who are creating amazing content are now starting to gain traction. They're starting to receive the same opportunities that more traditional talents have been receiving for years. I've never seen it as traditional entertainment vs new media, I think all forms of entertainment can learn a lot from each other.

Michael: If you were starting today would you have just gotten out of college and just started making videos or would you still have done the Hollywood thing?

Rosanna: I don't think I would have done anything different because working on those sets and absorbing all that information and how they produce content was invaluable for me. I have been able to meet so many different wonderful, creative, and talented people.

Rosanna: When I started out on YouTube I wanted to make family friendly content that I wouldn't be embarrassed to show my dad. I just followed my gut and said, "You know what, I'm just going to be my corny, bubbly self and maybe other people are out there like me." Just be yourself and work hard and the rest falls into place.

Michael: Because we love the competition videos so much, can you give my daughter Aliya a point? 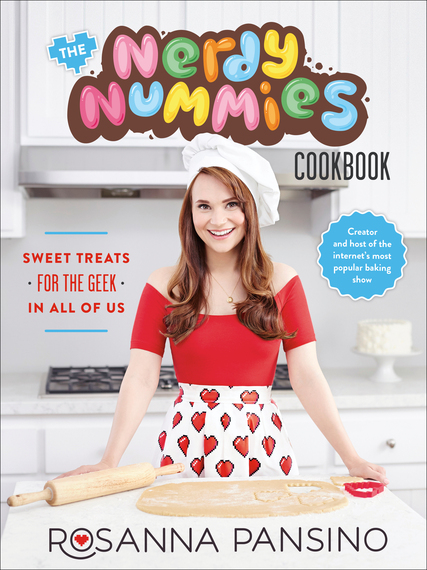 Rosanna Pansino, self-styled nerd (we respectfully disagree -- we find nothing nerdy about her!) 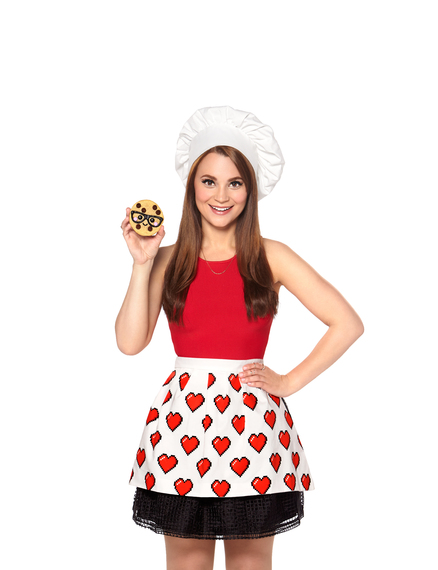