The 2012 Rose Parade, which takes place on Monday, January 2nd in accordance with the "Never On A Sunday" tradition, steps off at 8am PST.

Southern Californians who make the trek to watch the parade in person face traffic, limited parking and limited space along the 5.5 mile parade route -- but that won't stop the approximately 700,000 people who are expected to make it out there. The OC Register's infographic guide to the Rose Parade notes that parking "is a nightmare," but that savvy spectators would be wise to park on Pasadena streets starting at noon the day before the parade. The parade steps off on South Orange Grove Boulevard and Green Street and then marches east on Colorado Boulevard. The parade ends by turning north on Sierra Madre Boulevard and stopping at Villa Street. Check out a list of street closures related to the Rose Parade.

The rest of us can watch live coverage of the events on KTLA (which is also doing a live feed online), and East Coast viewers can catch it on local ABC and NBC stations from 11am to 1pm EST. National channels covering the parade include the Hallmark Channel, Home & Garden and Univision, according to the SF Examiner.

As for those who are interested in this year's unofficial float, Gigaom reports that Spencer Mills will be broadcasting Occupy The Rose Parade online. Details to be announced on Mill's twitter feed.

Leading the parade in its 123rd year is Grand Marshall J.R. Martinez, a military veteran turned inspirational speaker and actor (and the 2011 champion of Dancing With The Stars). In a press conference on Friday, Martinez expressed both gratitude and disbelief about his role in the upcoming parade. "It's really going to be amazing... I think that's really going to hit me in an emotional way," he said. "To think, here I am bringing in 2012 in such an unbelievable way."

Rose Queen Drew Washington also joins the parade, where she will appear with six rose princesses: Morgan Eliza Devaud, Stephanie Grace Hynes, Cynthia Megan Louie, Kimberly Victoria Ostiller, Hanan Bulto Worku and Sarah Nicole Zuno. Richard Jackson, president of the Tournament of Roses, praised this year's royal court, saying, "We are so honored to have them as a part of our Tournament of Roses family. These beautiful, smart and poised young ladies have been and will continue to be excellent ambassadors of the Tournament of Roses."

Stay tuned to the Huffington Post for more coverage of the 2012 Rose Parade.

Preparing For The Parade

In the slideshow below, volunteers work on the Everybody Walk float, a caterpillar with a walking stick and compass. Organizers at EverybodyWalks.org want parade-goers to know the health benefits of walking: the risk of heart disease, diabetes and other diseases are decreased, and years can be added to a life with a regular walking routine.

All photos by Deborah Zeitman/EveryBodyWalk.org. Captions by Jason Evans. 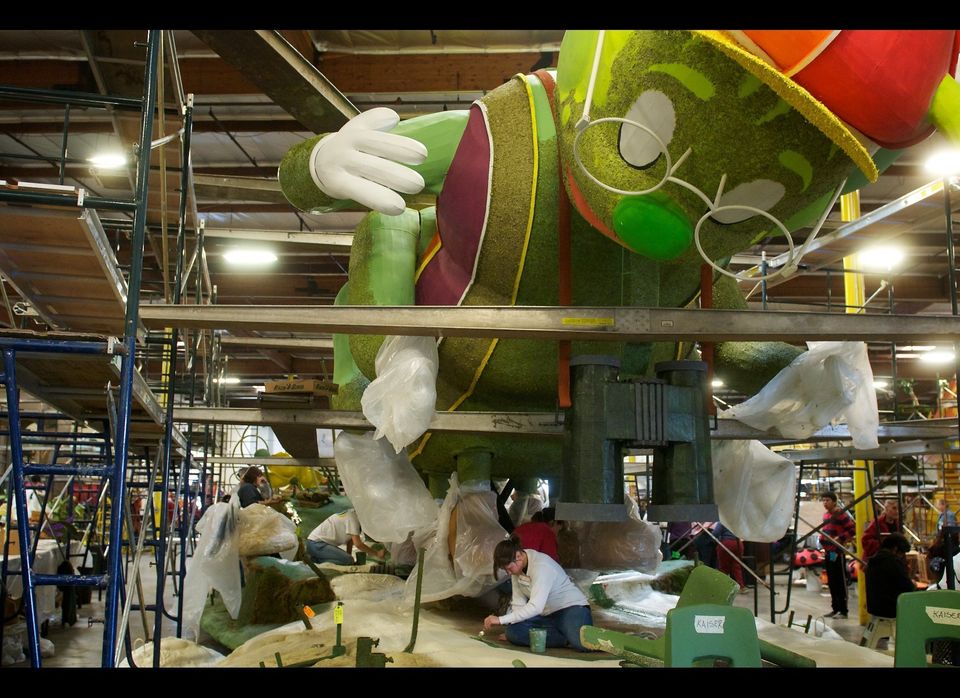 1 / 11
The float is a caterpillar with ten feet walking through a garden along with other insects. The caterpillar has a walking stick and compass to guide it. - Jason Evans
Deborah Zeitman/EveryBodyWalk.org