Where did the Earth get its water? For years some scientists have argued that it was brought here by water-bearing comets that smashed into our planet during its infancy.

But new data from the European Space Agency's Rosetta mission suggest that that theory is all wet.

The data show that the chemical signature of water found on Comet 67P/Churyumov-Gerasimenko differs significantly from that of the water found on Earth. (Comet 67P's water contains about three times more of the heavy hydrogen isotope deuterium than does terrestrial water.) And that has Dr. Kathrin Altwegg, the principal investigator for the Rosetta instrument that collected the data, arguing that it's unlikely that comets brought water our way. 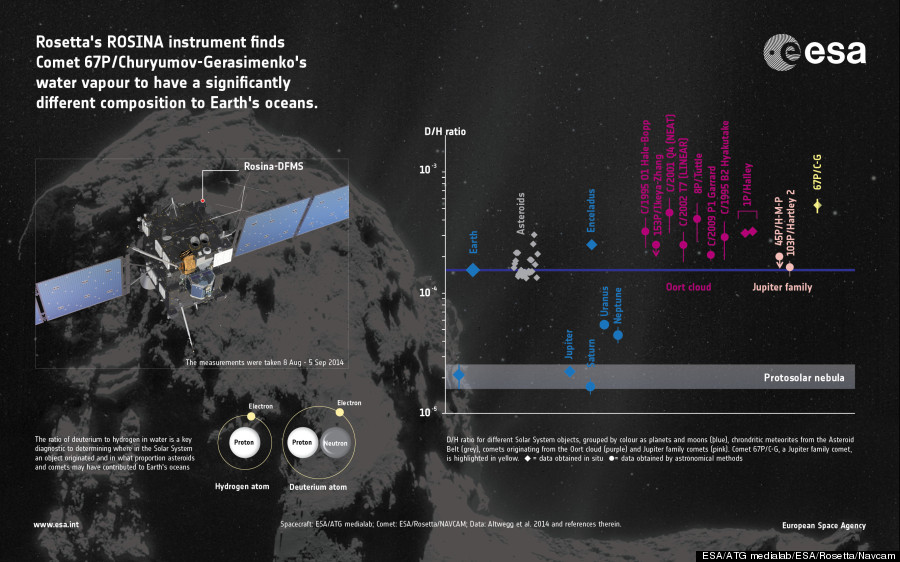 Rosetta’s measurement of the deuterium-to-hydrogen ratio (D/H) measured in the water vapor around Comet 67P/Churyumov–Gerasimenko. The measurements were made between Aug. 8 and Sept. 5.

Instead of comets, Altwegg said in a written statement, it could have been asteroids.

She said that while asteroids today contain limited amounts of water, that probably wasn't the case billions of years ago, according to The Guardian.

Dr. Michael A'Hearn, a University of Maryland astronomer who wasn't involved in the research, called the new finding startling, the Associated Press reported. But he said it doesn't rule out the possibility that other kinds of comets could have brought water to Earth.

But Donald Yeomans, program manager of NASA's Near Earth Object program, told the AP that the finding pretty much does rule out comets.

A paper describing the new data was published online Dec. 10 in the journal Science.