Rosie O'Donnell's relationship with her house on Star Island lasted longer than her show on Oprah's TV network, but it, too, has come to an end.

Just days after "The Rosie Show" was cancelled, the outspoken actress listed her 12-bedroom mansion in one of Miami Beach's most exclusive enclaves for $19.5 million, an almost 300 percent markup from the $6.75 million she paid for the place in 1999. There's no word on why O'Donnell's bailing on Star Island, but perhaps once one is reportedly turned away from neighbor Diddy's New Year's Eve party, there's just no going back to homeowner's association meetings.

But whatever the reason, there'll likely be a very wealthy buyer happy to have it. According to real estate agent Kevin Tomlinson, Rosie's 1923 Spanish-style waterfront estate boasts a whopping 11,104 square feet on more than an acre of land, two separate private guesthouses, a pool, and, perhaps most impressively, 203 feet of Biscayne Bay frontage with a large dock.

Inside, of course, the house is pretty impressive: a professional kitchen, millwork, and fireplace highlight the interior, while a large balcony terrace overlooks the McArthur Causeway, Fisher Island, and western South Beach. Our favorite part: the massive hammerhead floating over the staircase. Who needs a bigger boat when the house is so massive? 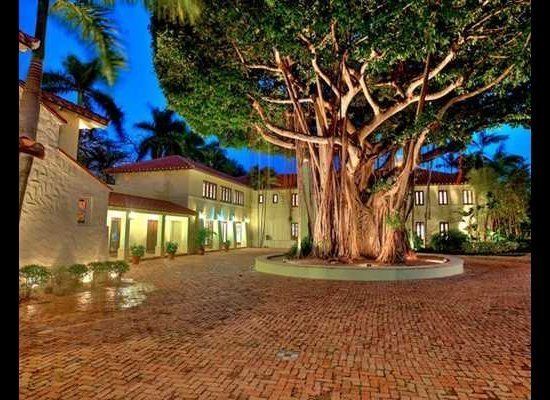