The Missoni name is synonymous with luxury fashion and decor, so it's no surprise the Missoni-brand hotels embody both. The minimalist design perfected by the Missoni label translates into a sexy, seductive masterpiece. In 1969, Women's Wear Daily, then considered the ultimate word on fashion, wrote "Missoni is in the lead with one of the most sinful dresses among those inspired by Art Déco". Now, with one hotel under its belt and another one opening on March 1, Missoni is taking its legacy fashion knowledge making its mark in the hospitality industry.

At the helm of the label for 50 years is Rosita Missoni who, along with her husband Ottavia Missoni, created a unique and imitable style that's coveted by designers around the world. In 1997, Senora Missoni handed the reigns of the fashion label to her daughter Angela, but has since devoted her time and talent to MissoniHome collections. The collections arm of the company helped foster the 2005 relationship between Missoni and Brussels-based Rezidor Hotel Group and together the two companies launched the first Hotel Missoni in Edinburgh in 2009. 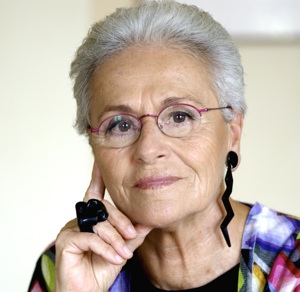 On the eve of the latest Missoni hotel opening - Hotel Missoni Kuwait opens March 1 - I caught up with the fashion house matriarch to learn more about the concept of hotel design, her dream destinations and the talk of Europe: The Royal Wedding.

Melanie Nayer: In your own words, how do you incorporate the Missoni brand into the hotels? Is there one specific item that each hotel must have to be "Missoni", or do you view each hotel separately and give it its own distinct Missoni touch?

Sra. Missoni: When we made up these decisions to work on the Hotel Missoni project, we thought it was a good opportunity for our brand and especially for the home collection to have space to experiment and showcase what's special about the home collection. Besides that, we are considered good hosts -- we have a way of welcoming people which is well known throughout the fashion world, so we said 'Ok, let's go to hotels.'

For me, I hate luxury in the sense which is given to luxury and luxury brands. For me, real luxury is good attentive service, and good and comfortable design. This is real luxury -- it's a simple principle, but we kept them as our [focus].

Nayer: What are the most important design qualities to a Missoni hotel? How do you distinguish the Missoni label from other hotel designers?

Sra. Missoni: We keep to our identity. We like color, but we started with black and white patterns and then as the project was developing we started putting colors into the walls, doors, and corridors. For example, in Edinburgh, all the corridors are different colors. It's elegant, but low key.

The Hotel Missoni Edinburgh offers 136 rooms and suites, some of which offer views over the city landmarks and the famous Royal Mile, and was designed by Sra. Missoni. The interiors of Hotel Missoni are bold and dramatic with an overall color scheme that is a simple, stylish black and white with flashes of color strategically placed throughout.

Sra. Missoni: Kuwait versus Edinburgh was a challenge, but also a great opportunity. The dimension of the project was much bigger than Edinburgh -- the Kuwait hotel has large public space, three restaurants, and all the bedrooms face the ocean. It was a place where we could use more colorful patterns, for instance. We were thinking sunshine, swimming pool, big terrace, and gardens and we were quite pleased with the way it turned out.

In Kuwait, we used more on gold color - the country likes gold, so of course there is more gold around the hotel including golden fringes around the corridors and chandeliers.

Hotel Missoni Kuwait has 169 guest rooms and suites and forms part of Kuwait's exclusive Symphony Center in the capital's shopping district. The sea, sun and sand of the country served as inspiration for Sra. Missoni, who used over 85 different shades of color throughout the property ensuring that each area has a distinct look and feel. In addition, nearly 10 million individual mosaic tiles were laid out to recreate the famous Missoni zig-zag stripes throughout the hotel, including the floor of a standout swimming pool overlooking the Arabian Gulf and Kuwait City skyline.

Nayer: Is there a dream destination for the Missoni brand?

Sra. Missoni: The Italian island of Venice - my favorite city in the world.

So what's next for the Missoni hotel brand? Oman and Brazil are scheduled to open within the next few years but Sra. Missoni has her sights set on something a little more formal.

"We have been asked by Harrods to design the wedding cake for Prince William and Kate," Sra. Missoni told me. No truer sign that the fashion label has perfected luxury fit for a king.