When the last of the 4th of July fireworks have exploded, festivities at Roswell will just be starting.

A three-day Roswell UFO Festival marks the 66th anniversary of a flying saucer legend that made the New Mexico town forever synonymous with paranormal conspiracies.

In early July 1947 -- the exact date isn't known -- something fell out of the sky and crashed on a ranch near Roswell, leaving scattered debris. The ranch foreman was the first to see the material and he eventually told the Roswell sheriff, who then alerted the military at nearby Roswell Army Air Field, home of the 509th Bomb Group.

Intelligence officer Maj. Jesse Marcel was assigned the initial task of heading to the debris field to collect some of the material, which was described as shiny wreckage, including pieces of rubber, super-resistant tinfoil, wooden sticks and metallic-looking I-beams. See image below of Marcel posing with the alleged debris. 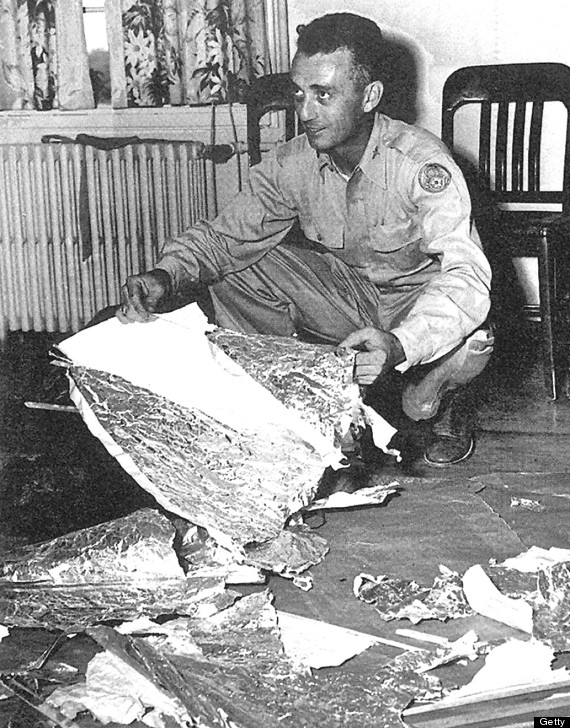 One of the speakers at this weekend's Roswell celebration is Jesse Marcel Jr., who was 11 years old in 1947 and who, along with his mother, was shown pieces of the UFO material by his father.

"There were these I-beams about 12 to 18 inches long, and the most unusual part of that was the symbols or writing on the inner surface," Marcel Jr. previously told this reporter. "I thought, at first, it was like Egyptian hieroglyphics, but when I looked closer, it seemed more like geometric symbols of some kind -- it was very strange."

On July 8, 1947, the Roswell Army Air Field issued a press release (see image at right) indicating that the military had recovered a crashed flying saucer. Just as quickly as that story emerged, it was deflated when a second press release claimed that the debris was, in fact, from a weather balloon.

As the story grew over the years, it included tales of multiple crash sites and the recovery of alien bodies. In the 1990s, the Air Force issued two reports, concluding that the material recovered in 1947 was from Project Mogul, a secret program of atmospheric balloons used to detect Soviet nuclear tests.

The alien bodies were officially explained as misidentifications of crash test dummies used in military experiments.

But each year, all are welcome -- skeptics and believers -- to join in the Roswell festivities and, of course, to bring in some revenue for the city. While disputes continue between flying saucer skeptics and advocates, Roswell probably won't lose its stature as the UFO capital of the world anytime soon.

The schedule for the UFO festival indicates that, among the many activities, you can be shown how to "build an alien hat to ward off the aliens from scanning your brain!" A useful enough tool.

Many speakers will offer their take on subjects as diverse as:

While the UFO debris is long gone and the dust long settled over the town of Roswell, the reverberations have never stopped. Was it an alien spaceship that crashed 66 years ago -- or just a high-flying military device?

There are more than enough stories, claims, accusations and allegations to keep the legend alive. Not to mention all the alien souvenirs, crystals, necklaces and ice cream to keep people coming back for more.

The Roswell UFO Festival runs from July 5 to 7.