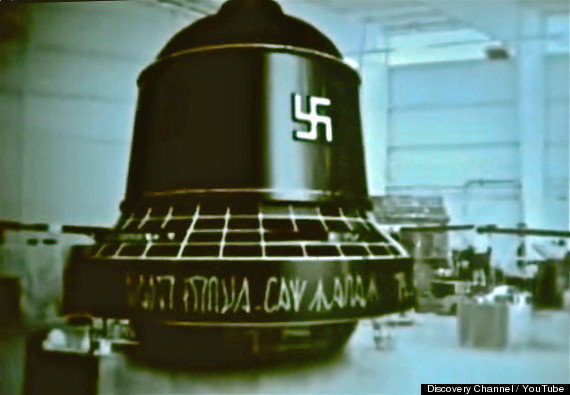 The Roswell, New Mexico, UFO crash of 1947 was the result of -- here it comes, wait for it -- top secret Nazi technology. No alien spacecraft, no alien bodies, but an aircraft called the "Bell" (depicted above from a 2008 Discovery Channel documentary). 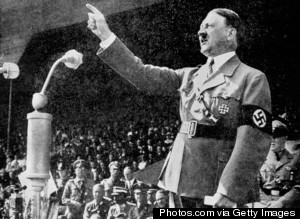 At least that's what a new German film seems to suggest, according to OpenMinds.tv.

To be sure, it's questionable what actually happened in the outskirts of that small town 67 years ago. But it's also questionable if this film will ever see the light of day.

At least, here's the most truthful thing known about the incident: Something came out of the sky in July 1947 and crashed on a ranch near Roswell. But what that "something" was has become a nearly 70-year-old legend.

Everything from extraterrestrial spacecraft to weather balloon to military high altitude device for spying on Soviet nuclear testing has been offered for the identity of the crashed object.

And now, the film, supposedly called "UFOs and the Third Reich," is promoting another theory: A 10-foot-wide, 12-foot-high, anti-gravity, bell-shaped craft, combining rocket and helicopter technology, created by Nazi Germany, fell into the hands of the U.S. in 1943, who further developed the project. An alleged test of the Bell resulted in its crash, which became the event that started the Roswell UFO saga.

Stories about the Nazi Bell have cropped up in the UFO literature for many years, including Discovery Channel's 2008 "Nazi UFO Conspiracy."

"This is what I saw, with my own eyes -- a Nazi UFO," German aeronautical engineer Georg Klein is reputed to say in "UFOs and the Third Reich." "I don't consider myself a crackpot or eccentric or someone given to fantasies."

The new film is also rumored to focus on German engineer, Joseph Andreas Epp, who reportedly worked on a UFO project which resulted in several saucer-shaped vehicles that supposedly included dome-shaped cabins and a rotating rim.

"The wing blades would be allowed to rotate freely as the saucer moved forward, as in an auto-gyrocopter," Epp said. "In all probability, the wing blades speed -- and so, their lifting value -- could also be increased by directing the adjustable horizontal jets slightly upwards to engage the blades, thus spinning them faster at the digression [sic] of the pilot."

If the so-called Bell UFO is what actually crashed outside of Roswell in 1947, it would contradict the many military eyewitnesses who eventually came forward and described the physical appearance and otherworldy characteristics of the object that fell out of the New Mexico sky -- not to mention their descriptions of several small humanoid occupants of the craft.

This isn't the first time we've looked at the so-called Nazi-UFO-Alien connection.

Back in 2011, investigative reporter Annie Jacobsen raised a controversial question in her book about the top secret Nevada military base, known as Area 51: Did former Soviet leader Joseph Stalin recruit Josef Mengele, the Nazi "Angel of Death," to surgically alter children to look like aliens in 1947, and did they place these malformed adolescents on board a Soviet spy plane to be part of the Roswell UFO crash?

At the beginning of 2014, we examined a wild story that suggested the U.S. government has been under the control of a shadow government overseen by extraterrestrials who helped Nazi Germany's rise in the 1930s.

The current German documentary certainly won't bring more answers to the Roswell debate. At the very least, it offers further questions about who and what to believe of the biggest UFO controversy in history.

And, oh, there's one other thing about this "new" film. Whoever the producers of it are, they don't seem too interested in releasing any promotional clips, trailers or still images from it. An extensive Internet search hasn't turned up anything -- yet.