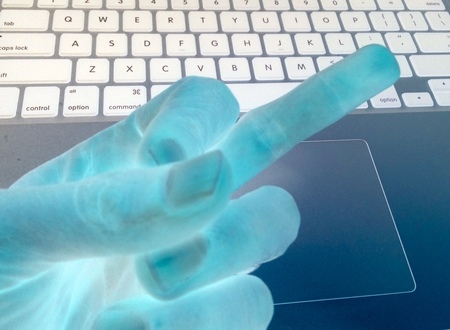 I've been an avid Apple user ever since I starting writing my college papers on the Macintosh Classic in the early 90s. As years wore on, I upgraded as my budget allowed, eventually acquiring the first iMac G3 in 1998. Apple products were so incredible back then, and I'd laugh at friends and family members when they'd call to ask for help removing a virus from their pathetic PCs. "A virus?" I'd snap, "Macs don't get those. Sorry. Gonna go organize my iTunes playlists now. Good luck with that."

Shortly thereafter, Apple released the first generation iPod. It's success eventually led to the release of the first iPhone, which was a disaster. As we all know, subsequent versions were not, and before long, everyone and my mother had an iPhone and had ditched their glitchy PCs for iMacs and Macbooks. That's around the time the Apple started to rot.

In recent years, yours truly, the ultimate Apple endorser, has gotten so fed up with their products and software that I'm tempted to go...gulp...PC. I sure as hell won't, but it's reached the point where every software "upgrade" brings on a case of IBS because I get so nervous I'm going to lose some important features I use when I hit that install button...

Take for example, iTunes, which, up until a few years ago, was beyond easy to use. Now, with every update, functions that used to be obvious are hidden in a labyrinth that exists underneath some button I can't even find! As a DJ, I subscribe to the iTunes Match service in order to keep all my devices in sync. That worked great until about a year ago, when my iPad started having all these problems Apple Support hadn't ever heard of when I spent six hours on the phone with them one day. They assured me I was a top priority and were opening up a case about it and would get back to me in 48 hours. It's now been 14 months and I have yet to hear back from them.

Then there's iPhoto, which was recently relaunched as Photos and is basically a carbon copy of that shitty software we use on our iPhones. Gone are the sliders to adjust contrast, tint and saturation - replaced by filters and adjustments that are just "basic bitches" if you ask me. But then again, maybe the features I love are there and I just can't find them because they're hidden behind some invisible button.

Moving onto the iPhone. So many bizarre things happen on that thing, it deserves it's own episode on The X Files. But let's start with that "other" bar that shows up when you go to sync your phone because you have no more room to take pictures. That puzzling yellow bar always displays that it's taking up more memory than the songs and pictures on my phone, yet when I called up Apple to ask how to reduce it, they had no idea. I had to resort to searching articles online about how to get some more space on my phone - which in and of itself was time consuming - not to mention the amount of time it took to implement the steps I read about.

Years ago, when I first convinced my mother to ditch her PC for an iMac, I was thrilled whenever she'd call me up with a question I'd be able to answer in seconds. Now, the problems are so complicated, I have to scour nerd blogs for a week to try and figure out a solution.

I understand Apple has grown exponentially now that everyone and their infant has an iPhone and an iPad. The only thing I can hope for is that the company starts pouring more money into supporting their computers and devices and stops rushing out updates without testing them properly. Sorry, but I've spent upwards of $4,000 on these products and would rather not be a guinea big for their latest OS. Sadly, they only thing I can do is bitch about it in this blog because I'd sooner have HAL 9000 over for dinner than start using a PC.

Greg Scarnici is the author of the upcoming book, "I Hope My Mother Doesn't Read This"' out September 22nd. Connect with him and his social networks on http://www.gregscarnici.com