I am not like any moviegoer I know. When I get to the cinema, I prefer to know nothing about the movie I'm about to see... not who is in it, or if it is a comedy, a romance or a thriller. I avoid the previews, which usually give away 90 percent of the plot and seem to rely on the best scenes in the movie. Imagine sitting down to watch Forest Gump without knowing a thing about it. The experience turns into an emotional wrestling match. My strategy does have its pitfalls, of course. I won't forget the time I was traveling on my own and went to watch the movie Hostel. 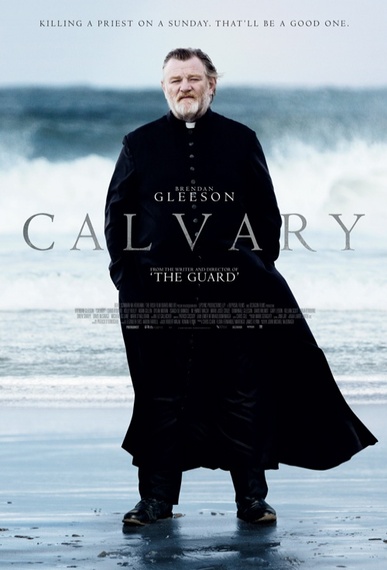 So when my friend Bill Lucky said, "You have got to go see the movie Calvary," I successfully managed to enter the Garden Theater without knowing a thing about it. One hundred minutes later, my teary-eyed wife turned to me and said, "What was Bill thinking?" I think I know.

Calvary, set for DVD release this week, is about pain, suffering and brokenness in community. It is about ministry. It is the story of a village where abusers, victims, white-collar criminals, lost souls, incompetent colleagues, suicide survivors and lonely hearts all reside in close proximity. And in the center of all of this pain and suffering, and part of that pain and suffering, is the priest, the person who is laughed at and relied on, who is ridiculed, yet sought out.

In a world with broken hearts, twisted minds, lonely souls, battered bodies and jaded skepticism, it is the clergy who remain steadfast and resolute and who bring back hope again and again. Calvary is an Irish version of It's a Wonderful Life with an alternate ending.

Who wants to make a difference in the world? Who wants to be present, relevant, courageous and steadfast? Who wants to be on the frontline of domestic violence, prison reform and suicide prevention? Who wants to be a comfort to people in their most vulnerable moments? Who wants to stand up against injustice when no one else will? I know. These are the instincts, ideas, desires and commitments that define and describe this generation of young people. And many are looking for a place to stand so that they might "move the world."

Enter ministry. I want to issue a warning to anyone who thinks they want be a minster and an invitation to those who don't.

If anyone thought that ministry was going to be a cushy job, where one could work at one's own issues while being only partially present, they are sadly mistaken. Anyone who says they want to go into ministry should be required to watch Calvary more than once, and ask at the end if they know what they are signing up for. Are you ready for this? Put another way by my friend and mentor, Rev. Todd Jones, who greeted me at my ordination with the only words I remember from that day: "Now you have to be ready to preach, pray or die at any moment."

I challenge anyone who never thought of the ministry, but who wants desperately to make a difference in the world, to be relevant, to be engaged in the most important issues of the day, to watch this movie and say ministry still matters. Ask the question, "is ministry something I want to do?"

I hear people say they're not "religious enough" to be a minster. Instead, they want to be involved in people's lives and take action to fight injustice. To me, that is being super religious. Many assume that a call to minster happens in the form of a lightning bolt. But a call to ministry can occur when an injustice happens to someone else and that experience transforms you to engage, to be aware, to reach out, and to be vulnerable. And, yes, to minister.

The person who is looking for a meaningful life and wants to make a difference in the lives of others holds a prominent presence in the community, challenges people when they are acting badly, and lifts up broken souls when they are feeling hopeless.

Ministry is lonely and fearless. Ministers are required to keep confidence, yet proclaim liberation. When I spell check my documents, I often misspell ministry and the suggested word that pops up is misery. Sometimes I'm not sure if it is the holy spirit at work or just my bad spelling. The public scorn that ministers receive is matched by the personal confidence that individuals place in them.

In the end, the ideal of the good priest prevails because the minister plays his part, not without missteps, but faithfully nonetheless. This is the reason the film is not a tragedy. The priest knew his role and he lived out what he felt called to do. He mattered in peoples' lives and (spoiler alert!) when instructed by his assailant to say his prayers, he responded, "I already have."

I knew why Bill wanted me to see this movie. He wanted me to see it because in the character he saw a figure living out the life that I have long sought to live. Now having seen the movie, I feel like I have a better chance of doing just that.