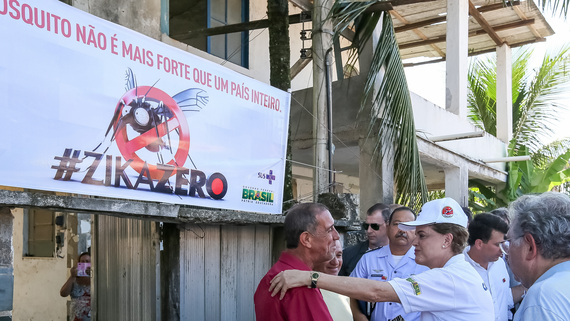 The epicenter of the Zika virus epidemic, Brazil has launched a major offensive against the mosquito born disease that has contaminated more than 1.5 million people in the country in less than a year and could infect an estimated 4 million in the Americas, including in the United States, in the next twelve months. The World Health Organization declared Zika a global health emergency on February 1st. Although it is asymptomatic in most cases, the rapid spread of the virus has alarmed health officials after the birth of hundreds of babies with abnormal small heads in the Brazilian Northeastern region. Scientists have yet to fully establish and explain the connection between Zika and microcephaly. Marcelo Castro, Brazil's Health minister, said last week that he " is absolutely sure" that the virus is the cause of the condition in at least 41 of 3,800 cases under study. The WHO is not so certain. "The experts agreed that a causal relationship between Zika infection during pregnancy and microcephaly is strongly suspected, though not yet scientifically proven," said WHO General Director Dr. Margaret Chan.

Biologist Fernando Reinarch, a member of the National Academy of Sciences, agrees with the cautious approach taken so far by international health experts. He says that microcephaly is not new and that the recent explosion in the number of cases may be explained in part by a change in the reporting criteria in Brazil, which became mandatory only last year, after doctors and health officials started to see in the state of Pernambuco an unusual number of babies born with brains smaller than the 33 centimeters in diameter considered normal. In his February 6th column for the daily Estado de S.Paulo, Reinach noted that Brazil and the US use the same definition for microcephaly. In the US, some 25,000 babies, or 0,6% percent of the 3 million newborns every year, are reported to have the condition, from various causes. Using the same percentage, Reinach estimated in 19,250 the number of children born with microcephaly in Brazil per year. The change to mandatory reporting of microcephaly, not Zika, may explain the sudden increase in the number of cases.

A "war" against the virus

Wearing tee-shirt and hat proclaiming that the mosquito that spreads Zika "is not stronger than an entire nation," president Dilma Rousseff led an unprecedented national mobilization against the disease on Saturday February 13th. All members of her cabinet and hundreds of senior officials, including the president of the Central Bank and the number two at the ministry of Foreign Affairs, joined 200,000 soldiers who were dispatched to 350 cities to raise awareness and share information about the use of insect repellent and ways to prevent accumulation of stagnant water in abandoned tires and discarded small plastic containers in or near homes -- preferred breeding grounds for the Aedes aegypti, the virus vector.

"In the past, we won the war against yellow fever, and we are going to win the war against Zika", Rousseff said in Rio de Janeiro. "We are trying to catch up after decades of abandonment in terms of sanitation," added the president, whose Workers Party has been in power for the past thirteen years. The former capital of Brazil, Rio is thousands of miles from the region most affected by Zika. But it was chosen as the starting point of national mobilization for a good reason. The city will host this year's Summer Olympics, in August, and local and federal officials fear the event could become a global public relations nightmare if they fail to convince athletes and hundreds of thousands of Brazilian and foreign tourists expected to attend that the situation is under control and chances of contamination by Zika are minimal. Since the games will take place during the Southern hemisphere winter, when mosquitoes' populations are smaller and less active, the government campaign will likely succeed and avoid adding an Olympic fiasco to its many problems: a deep economic recession, now in its second year, a major corruption scandal still unraveling and a severe political crisis that has produced a yet unresolved impeachment process against the embattled Rousseff. It is uncertain, however, whether a high profile offensive to contain Zika virus will help the president regain the political credibility she needs to govern and start moving the country away from its unhealthy current path.

Brazil's ambassador to Washington, Luis Alberto Figueiredo Machado, wrote recently that Brazil is doing its part in many fronts in the global fight against Zika and had deployed 300,000 health workers to eliminate mosquito breeding grounds before last week's national mobilization. The complexity of the epidemic and the government's poor crisis management record suggest the challenge posed by Zika and microcephaly is one more uphill battle for the president. On the positive side, Brazilian doctors, scientists and public health officials working on the frontlines of the campaign against the virus are respected by their peers worldwide and have been praised for their response to the epidemic. A recent PBS NewsHour report on Zika highlighted the dedication of doctors such as obstetrician Adriana Scavuzzi and neurologist Ana Van der Linden in Recife, the capital of the state of Pernambuco which is ground zero of the epidemic and has seen most cases of microcephaly reported so far. Both doctors have been working incessantly on the problem with epidemiologists and other public health professionals in Brazil and abroad since April of last year, when the first cases were confirmed.

Brazil and US working on vaccine

Dr. Tom Frieden, director of the Centers for Disease Control and Prevention, and Dr. Anthony S. Fauci, Director of the National Institute of Allergy and Infectious Diseases at the U.S. National Institutes of Health, highlighted the ongoing cooperation with their Brazilian counterparts at a hearing jointly held on February 10 by three House Subcommittees. Dr. Fauci highlighted the agreement reached with the São Paulo-based Instituto Butantã to develop a vaccine against Zika within five years.

The head of Brazil's Health Ministry Department of Communicable Disease Surveillance, Dr. Claudio Maierovitch Pessanha Henriques, shared valuable information on the work the country's health officials are conducting in collaboration with colleagues in the US and in neighboring countries in South America during a telephone conference organized by the Council on Foreign Relations on February 5th. President Barack Obama has requested a $1.8 billion supplemental budget to the combat and prevention of Zika. Finance minister Nelson Barbosa said the government will not reduce funds for the fight against Zika.

Providing the resources public health officials and researchers need to conduct their work is key to ensure the continuity of their efforts to understand and contain the spread of the virus, expected to reach Southern parts of the United States in the Summer, according to Laurie Garret, Senior Fellow for Global Health at the CFR. These were key ingredients of the successful strategy Brazil developed against the pandemic of HIV-AIDS virus in the 1990, in collaboration with the US and France, which later benefited countries in Latin America and Africa.

In the toxic political environment prevailing in Brazil, however, it would be naïve to underestimate the negative implications of attempts by the government or the opposition to use the Zika virus crisis to score political points. Senator Marta Suplicy, a founding member of the president's Workers Party and a former minister of her cabinet turned adversary, described the government offensive against Zika as too little too late in a newspaper article last Friday. "The red flags were already there," wrote Suplicy, who left the Rousseff's party last year and is likely to run later this year for mayor of São Paulo, a position she once held. "The federal government is sending the Armed Forces to assist in the fight against the mosquito that transmits the virus. Very good. But the issue is deeper: if we don't tackle the structural problems, we will continue to suffer setbacks," added the senator, referring to problems such as lack of access to safe drinking water and sewer services that still affects 17 per cent and 30 per cent, respectively, of Brazil's 200 million people.

Unguarded statements can also complicate the campaign to contain the virus. On February 1st, the day the WHO declared the epidemic "a health emergency of international concern," minister of Health Castro made a brutally candid assessment of the country's chances to contain the spread of Zika, saying Brazil was "badly losing" the battle against the Aedes aegypti. Suplicy and Castro statements were factually correct. But in the current circumstances they are meaningless and only compound the sense of frustration and hopelessness that the Zika epidemic added to the country's many challenges.