Karl Rove's help for Sweden as it assists the Obama administration's prosecution against WikiLeaks could be the latest example of the adage, "Politics makes strange bedfellows."

These days, Sweden and the United States are apparently undertaking a political prosecution as audacious and important as those by the notorious "loyal Bushies" earlier this decade against U.S. Democrats.

The U.S. prosecution of WikiLeaks, if successful, could criminalize many kinds of investigative news reporting about government affairs, not just the WikiLeaks disclosures that are embarrassing Sweden as well as the Bush and Obama administrations. Authorities in both countries are setting the stage with pre-indictment sex and spy smears against WikiLeaks leader Julian Assange, plus an Interpol manhunt.

"This all has Karl's signature," a reliable political source told me a week and a half ago in encouraging our Justice Integrity Project to investigate Rove's Swedish connection. "He must be very happy. He's right back in the middle of it. He's making himself valuable to his new friends, seeing the U.S. government doing just what he'd like ─ and screwing his opponents big-time." 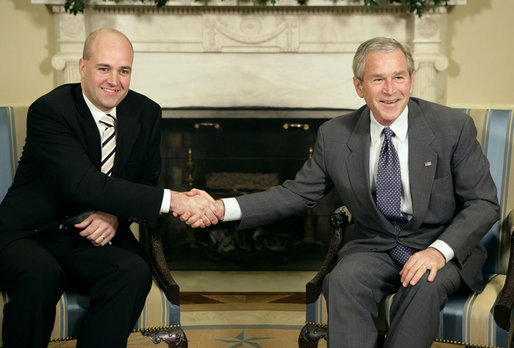 WikiLeaks created a problem for Sweden and its prime minister, at left above, by revealing a 2008 cable disclosing that its executive branch asked American officials to keep intelligence-gathering "informal" to avoid required Parliamentary scrutiny. That secret was among the 251,000 U.S. cables obtained by WikiLeaks and relayed to the New York Times and four other media partners. They have so far reported about 1,300 of the secret cables after trying for months to vet them through U.S. authorities.

Assange, a nomadic 39-year-old Australian, sought political haven in Sweden during this planning. Also, he fell into the arms of two Swedish beauties who offered to put him up at their apartments on his speaking trip to their country last August. Now free on bond, he is likely to be extradited from the United Kingdom to Sweden to answer questions about his one-night stands.

Swedish prosecutors initially dropped their investigation of assault complaints. But the decision was reversed. Far more ominously than the sex probe, Swedes could ship Assange to the United States.

The New York Times reports that the Obama Justice Department is devising espionage conspiracy charges under an innovative use of spy law to persuade an alleged WikiLeaks source, Army Pvt. Bradley Manning, now being held pre-trial in harsh solitary confinement conditions, to testify against Assange. Attacks on WikiLeaks are from many sides. Among them are the top congressional Homeland Security leaders: Sen. Joe Lieberman, the Connecticut Independent, and New York Republican Rep. Peter King.

Legal Schnauzer blogger Roger Shuler scooped me on the story about Rove's Swedish work in a Dec. 14 column, "Is Karl Rove Driving the Effort to Prosecute Julian Assange?" But a big part of our role as web journalists should be following up on each other's work.

Shuler is an expert on how Rove-era "Loyal Bushies" undertook political prosecutions against Democrats on trumped up corruption charges across the Deep South, including against former Alabama Gov. Don Siegelman, his state's leading Democrat. The Siegelman case has turned into most notorious U.S. political prosecution of the decade, as readers here well know. It altered that state's politics and improved business opportunities for companies well-connected to Bush, Rove and their state GOP supporters.

Ultimately, the House Judiciary Committee's oversight questioning of Rove in July 2009 turned out to be a whitewash. The probe was crippled by restrictions on format that had been brokered by the Obama White House and, more importantly, by an unwillingness of House Democrats to risk antagonizing Rove and his backers by asking obvious questions. Call it speculation, but the federal bribery charges that imprisoned the wife of House Judiciary Committee Chairman John Conyers (D-MI) surely deterred him from building a thorough case regarding Rove's relationship with the DOJ, or at least calling relevant witnesses from the Justice Department and elsewhere for public testimony.

At this stage, the specifics of Rove's Swedish work for Reinfeldt, a former Council of Europe president nicknamed "The Ronald Reagan of Europe," remain in doubt for outsiders.

Has Rove simply provided routine political advice and fund-raising counsel for Reinfeldt's successful re-election in September? Perhaps Rove gave media advice, based on his work with Murdoch-owned Fox News and the Wall Street Journal and many other traditional broadcasting and print outlets. Rove's patrons at those media outlets, perhaps not coincidentally, tend to disdain independent, web-based journalists who can disrupt their information gatekeeper role by going directly to documents instead of relying upon high-level contacts, or at least the willingness of bureaucrats to return phone calls.

Or has Rove drawn on any opposition research and dirty tricks skills that earned him such nicknames as "Turd-Blossom" from former President Bush and "Bush's Brain" from others?

One way to learn is to ask Rove himself, which I did via his chief of staff on Dec. 14. I attached for convenience the Shuler column about Sweden and in its inevitable allusions to Rove's prior work.

As readers here well know, Siegelman's convictions came only after years of pre-trial prosecutorial smears, witness sexual blackmail, and a bizarre trial before a judge enriched on the side by Bush contracts for the judge's closely-held company. No one column can encompass at reasonable length every important abuse in this tawdry, nearly decade-long tale. But my Huffington Post blog from last April, "Siegelman Judge Asked To Recuse Now, With Kagan, Rove Opposing Oversight," links to the scandals cited above.

Then, all of the wrongdoing was covered up by whitewashes by the Obama administration and congress. Siegelman, 64, is free on bail after a Supreme Court ruling last June created a new hearing for him in January, perhaps forestalling an Obama recommendation last year that he receive an 20 additional years in prison.

The former governor maintains that his prosecution was orchestrated by Rove and Rove's longtime friend William Canary, whose wife Leura led the state's U.S. attorney office prosecuting Siegelman. Remarkably, the Bush 2001 appointee Leura Canary still runs that Montgomery-based prosecution office more than two years after Obama's election, much to the horror of Siegelman's supporters nationwide. Siegelman is pictured below, including in a photo from his imprisonment. Authorities initially denied bail during appeal and put him in solitary confinement that prevented contact with family and the media after his 2007 sentencing, which was largely for reappointing to a state board in 1999 a donor to the non-profit Alabama Education Foundation.

Rove denies improper involvement in Siegelman's prosecution, and has not yet responded to my inquiry about Sweden. For reader convenience, I'll note that his memoir Courage and Consequence published this year contains no mention of Sweden or his client Reinfeldt. Rove's book also denies that he was forced from the White House over the firing scandal or that he had any improper role in the Siegelman case.

Whether or not Rove advised Sweden on how to go after Assange, the WikiLeaks revelations have brought into plain view dramatic opinions that often cross conventional political divisions.

Feminist scholar, rape victim and longtime volunteer rape counselor Naomi Wolf, for example, describes the sex assault investigation as "theater" designed to bring Assange into U.S. custody on more serious charges, not to enforce the law in routine fashion. "How do I know that Interpol, Britain and Sweden's treatment of Julian Assange is a form of theater?" she wrote. "Because I know what happens in rape accusations against men that don't involve the embarrassing of powerful governments."

Yet a New York Times report Dec. 18 implies a more straightforward investigation via leak of a 68-page confidential Swedish police report. Earlier, more context was reported in a Daily Mail article and a Crikey blog.

Whatever the case, this tale is more
Stieg Larsson
than
Swedish Bikini Team
. Regarding the espionage allegations, we see impassioned opinions that seemingly conflict with career affiliations:

But there actually is a pattern. Defenders of the WikiLeaks role tend to see a commitment to democracy in fighting for its values in the U.S., not in overseas military actions to fight "terror." In varying ways, Arianna Huffington, Glenn Greenwald, Robert Parry and Scott Horton argue compellingly that Mideast wars are the real issue with WikiLeaks, and that spy conspiracy charges baseless under our law endanger all investigative reporting on national security issues, not simply WikiLeaks. Such threats against the First Amendment coincide with broken Obama campaign promises on a host of justice issues.

So why does the Obama administration treat Rove and his GOP allies with kid gloves? Why are so many in the conventional media so passive to threats to our historic due process and First Amendment freedoms?