Pianist and repertoire specialist Ghenady Meirson has been the go to-master for two decades in Philadelphia for authentic Russian operatic repertoire. His Russian Romances concerts at the Academy of Vocal Arts, where he is on the faculty, has an avid following. In recent years he has also established Russian Opera Workshop for professional and aspiring opera singers that culminates in performances at the AVA.

ROW has proved so successful this year's there were hundreds of applicants who sent in audition tapes from all over the US and around the globe, including participants from Mexico, Croatia and even one from St. Petersburg, Russia. 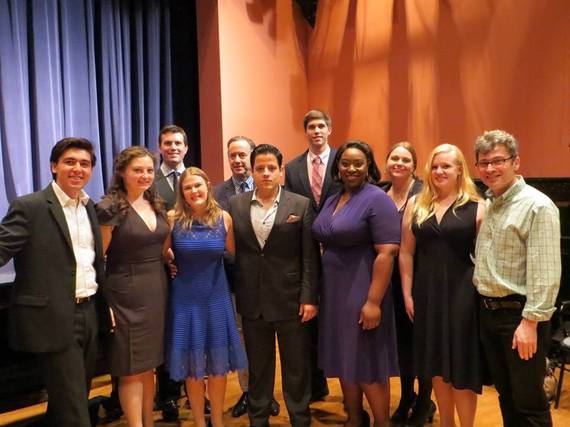 In addition to the chance to work with Meirson, and his team of faculty experts, the workshops are specifically designed for young opera singers launching their professional careers. ROW is an immersive experience for the singers with instruction on all aspects of the Russian repertoire, including language, vocal technique and acting, that culminates in performances at the end of the workshops.

Meirson chooses one famous Russian classic and one opera rarity. The performance underlines the musical purity of voice accompanied by just piano, with each concert over three nights rotating singers in the lead roles. .

Last month, ROW's first production was Tchaikovsky's The Maid of Orleans (aka Joan of Arc), in its Philadelphia premiere. Before he sat down at the piano for what will be over two hours of continuous playing with only one break, Meirson described the work's murky history to a packed first night audience.

Tchaikovsky wrote the role of Joan as a soprano and the conductor of the first production wanted the composer to rewrite it for a mezzo-soprano and he refused, though the score was changed by copyists, and Tchaikovsky had to subsequently correct them. Mierson, of course, plays the original Tchaikovsky version for soprano.

In the first performance, Gillian Watson (soprano, Irvine CA) acted the role of Joan with minimal gestures and fiery eyes, vocally she struggled only in the stratospheric timbres, but her luminous mid-range that fits the role. Anthony Schneider (Auckland, New Zealand) at her father has an ocean deep bass that, as he portends doom and damnation because of Joan's fall from grace.

This Tchaikovsky piece has huge chunks of romanticism, that is easily vamped, some sections could have been used on the soundtrack of The Perils of Pauline. So the narrative literalness, is atypical to the composer. But it is so interesting vis-à-vis his other operas. And beside the melodramatic aspects, there are some Mozartian and even baroque shadings. Tchaikovsky also wrote the libretto to and, again most of the scoring under the sung dialogue flows.

Some of the non-Russian singers had better feel for the language than others, but barely noticeable to this untrained ear. After Joan saves the town of Orleans she falls in love with Lionel and is torn between her devotion to her imbued mission and love with a flesh and blood man. Jeffrey Williams (baritone, Nashville TN) with clarion vocal richness makes this improbable character believable.

Jeffrey Halili (tenor, Toronto, Canada) is a former resident artist at AVA and is often a ringer for comic roles, here gets to showcase his dramatic skill and nuance as King Charles VII, who embraces, then condemns Joan as the mob is turning against her. Colin Alexander (baritone, Birmingham AL) has memorably solos as both the Archbishop and the soldier, singing both with equal vocal command.

Mierson assembled a 20-member chorus from local chorales to participate including from local choirs and they also deliver the unique choral dynamic in Maid. This year's workshop concludes late July with their staging of Eugene Onegin with a whole new roster of singers.