We first met Roxanna Elden at Miami Dade College where we were teaching a class on publishing. From the second she opened her mouth (which she did frequently) it was obvious she was a published author waiting to happen. She asked so many questions. And they were good questions. She was funny, she was engaged, and she had a great idea for a book. In fact, after many trials and tribulations, she got that book published, and now she has a second book coming out. So we thought we'd check in on her and see how the process went. 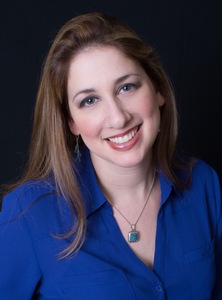 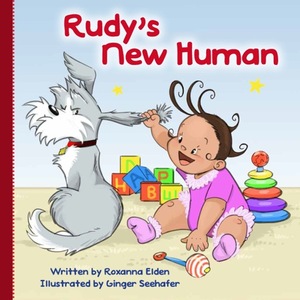 The Book Doctors: After the success of your first book, See Me After Class, what made you want to write a picture book for kids?

Roxanna Elden: The idea came from watching my dog, Rudy, as he adjusted to having a new baby human in the house. Like a lot of dogs, Rudy was the "baby" of our family before we had kids. Ever since, he's had to deal with all kinds of indignities--pulled ears, missed walks, and lots of interruptions to his couch naps. And, of course, he has had to learn to share the spotlight. A little after Rudy's first new human was born, I was suffering pangs of "pet parent guilt," and called my friend, Ginger. She already had two kids at the time, and she noted the similarities between Rudy's situation and what older siblings go through when a baby comes along. She also just happens to be one of the Chicago-land area's top illustrators. By the end of that conversation we had a book in the works.

TBD: Since your first book was nonfiction, did you have to find a new agent, develop new social media outlets, or find a new publisher?

RE: Same agent: magnificent Rita Rosenkranz. New publisher: marvelous Sky Pony Press. There is a bit of crossover from the audience of See Me After Class, because some elementary teachers have told me that they're reading the book with their students, and high school writing teachers sometimes do picture book projects. And, of course, lots of teachers are moms and dads and dog lovers. We are in the process of posting lesson materials on a popular lesson-sharing site called Teachers Pay Teachers. Despite the name of the site, everything in Rudy the Dog's "store" will be free.

TBD: Obviously your two books are in very different categories, but what did you learn from your first book that you were able to apply to this new book?

RE: The whole publishing process, from pitching the book to working with editors to looking for ways to connect with readers, was actually similar for both books. The Essential Guide to Getting Your Book Published was my road map through the process the first time, saving me years of trial and error. For this book, I reread the sections I needed to review and also ordered a copy for Ginger. The main lesson I learned from my first publishing experience is that marketing a book is (a) ongoing, and (b) unpredictable. With See Me After Class, I've done hundreds of different things over the past ten years to get the book into the hands of teachers who would love and benefit from it. These efforts ranged from epic to tiny, and the results ranged from total wash to big break. There hasn't been a recognizable pattern. For authors, if you do 100 things and only 6 pay off, the temptation is to wish you could have saved the time of doing the other 94 things. But it's important to remember that what "worked" wasn't the six lucky breaks you got. It was the fact that you tried 100 different approaches.

TBD: How did you go about getting your book deal for your new book?

RE: Our agent, Rita Rosenkranz, showed it to Jenny Pierson at Sky Pony, and she made an offer on it immediately. Having gone through the publishing process already, I knew this was pretty rare. We all had a conversation and by the end of it, Ginger and I both agreed that Sky Pony would be a great fit for the book.

TBD: How are you planning to promote and market this book?

RE: We have a website, www.rudythedog.net, where people can sign up to have Rudy send birthday cards to their favorite little humans and pet birthday cards to their pets. Also, because Rudy the canine-narrator is based on my real-life dog, we made a stamp out of Rudy's paw so he can "paw-tograph" books at book signings. We've authorized kids in six different cities to be paw-thorized paw-tograhers. They have a stamp and a notarized letter that lets them sign copies on behalf of Rudy. And I spend more time than I'd like to admit thinking of dog-related puns.

TBD: Have you learned anything about picture books from being a teacher?

RE: No one knows better than teachers how important it is to read to kids as often and as early as possible. I'm hoping that as both a teacher and children's book author, I can find creative ways to help more parents read to their children in ways that encourage a love of books and develop early reading skills. We've already put a reading guide on the website that describe some skills any adult can help kids develop, and we're working on more materials now.

TBD: What was it like working with an illustrator?

RE: In most cases, the publisher buys the book and then chooses the illustrator, so our experience is unusual, but in this case I pitched the book as a team with illustrator, Ginger Seehafer. The two of us are longtime friends--we met about 20 years ago as the only female caricature artists at a Six Flags theme park. That was the end of my career as an artist, but Ginger went on to become a top professional illustrator, doing work for big companies like Glade, Tropicana, and Hotels.com, all the way down to small companies just getting started. She had done my sample cover art when I was pitching See Me After Class, so I knew how good she was at turning verbal ideas into pictures without losing anything in translation. While discussing the book, we kicked ideas back and forth in both text and visual form until we came up with a final product. My description or text might spark an idea for Ginger, or she might send a picture that gave me an idea for a line in the book.

TBD: How did you determine how much text and how much picture would be on every page?

RE: We have a pretty good sample size of kids in the 2-6 year old age range, so for early drafts we just thought about what they would understand. Then we worked with the editors at Sky Pony, Jenny Pierson and Julie Matysik, who had experience with children's books and helped get the book into its final form.

TBD: What you want readers to take away from this book?

RE: We hope it will help older siblings adjust to having a new baby in the house--and reassure them that it's okay to have mixed feelings about sharing attention with another little human. (From what I've heard, I was horrible when my sister was born, and now we are best friends.) We also want to calm the nerves of new parents whose dogs used to be the baby of the family and who are now experiencing "pet parent guilt" as they find themselves juggling vet and pediatrician visits, dog feeding and baby feeding, and yeah... maybe have forgotten to clip the dog's nails for a while, okay?

TBD: We hate to ask you this, but what advice do you have for picture book writers?

RE: Young children read books differently than adults do. Adults form a mental picture of the action as they read the words. Kids mostly look at the pictures while someone reads the words aloud to them, so the picture has to tell part of the story. Ginger and I learned this the hard way. There was a page in the book where we had put an exclamation point over Rudy's head to show that he was surprised. In the first round of comments, the editors pointed out that punctuation marks don't mean anything to kids who can't read yet.

Ginger Seehafer is an illustrator who works as a commercial storyboard and
concept artist in the Chicagoland area. She studied at the American Academy of Art and started her art career as a caricature artist at Six Flags Great America. Ginger loves making art that inspires joy and creativity, especially in children who may become future artists themselves. She lives with her husband, two little humans, and two cats in Roselle, Illinois.

Rudy Elden has been a professional dog for eight years and is making his literary debut as the canine narrator of Rudy's New Human. He likes lunchmeat, cheese, long naps, and medium-length walks.