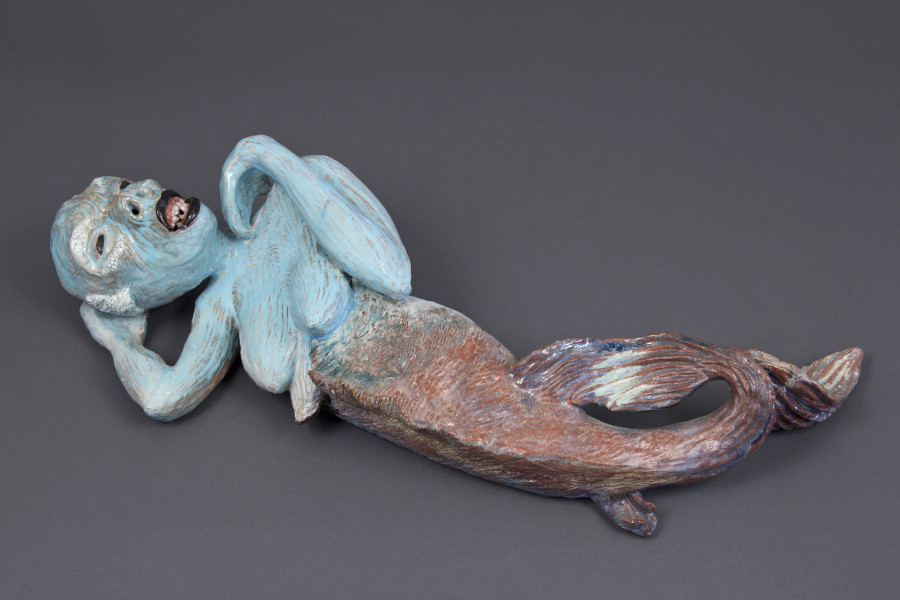 For those uninitiated with mer-centric folklore, the Fiji mermaid is a creature with a monkey's head and a fish's tail, a monstrous taxidermic construction first widely exhibited in 1842 by P.T. Barnum of Barnum & Bailey Circus.

The hybrid beasts were, of course, a hoax, one that originated in 19th century Japan and the East Indies. The withered sea life were originally rendered as spiritual artworks, however, when purchased and brought to London by an American sea captain in 1822, the beasts were exhibited as natural oddities. The Charleston Courier wrote of the unforgettable imagery: "Of one allusion [...] the sight of the wonder has forever robbed us -- we shall never again discourse, even in poesy, of mermaid beauty, nor woo a mermaid even in our dreams -- for the Feejee lady is the very incarnation of ugliness." 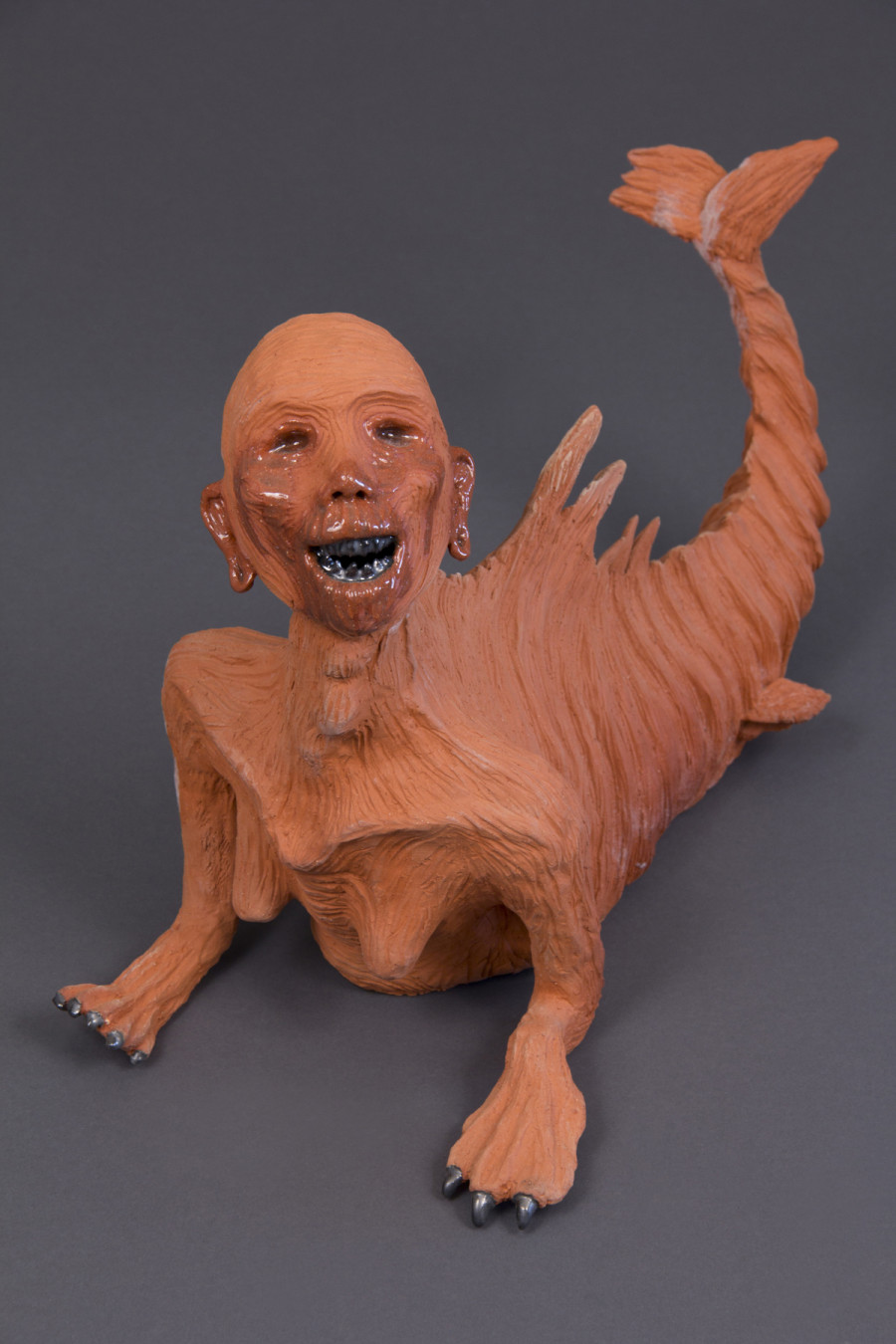 Far from the popular conception of mermaids as idealized, seductive maidens, the Fiji mermaid is more a surgical nightmare than a mythological dream, her wrinkled physique reminiscent of a fossilized baby with reptilian blood. Clearly not an Ariel or other Disney-ified mermaid variation, the Fiji merwoman's face is frozen in a disturbingly disfigured snarl, mouth split open as if eternally stuck in a silent scream. Barnum himself described her in his autobiography as "an ugly, dried-up, black-looking, and diminutive specimen [...] its arms thrown up, giving it the appearance of having died in great agony."

The grotesque feminine creature has made her pop culture cameos over time, appearing everywhere from "The X-Files" to Scooby Doo to, most recently and effectively, the mangled ceramic sculptures of Roxanne Jackson. 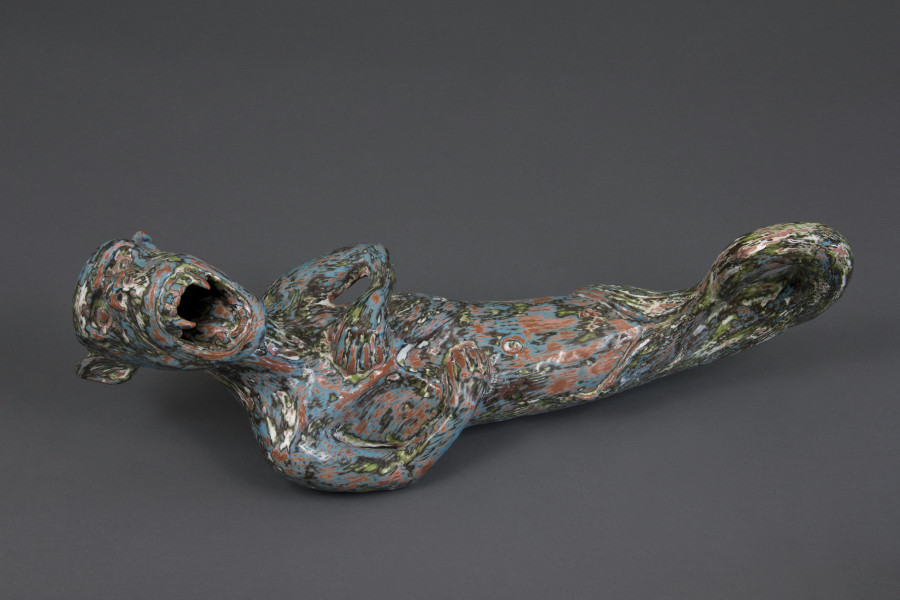 Jackson is a Brooklyn-based contemporary artist exploring the murky territory where horror meets pop and myth meets kitsch. Her mixed media sculptures operate as contemporary dark omens, exposing the spots where superstition and the subconscious conspire to turn spaces of comfort into something quite other. Her works teeter between beauty and decay, appealing to our grotesque fantasies while reeking of our eventual putrefaction.

With her most recent series, Jackson takes on a cluster of what she calls "feminine retro-beasts," most of which happen to dwell under the sea. Using traditionally crafty -- and often feminized -- media such as papier-mâché and yarn, Jackson renders mutant forms anything but comforting. Many of the works, including "Early Woman" and "California Dreamin’" revisit the culture of circus sideshows of the mid 1800s, eliciting that same mixture of fear and fascination. With wrinkled flesh, gnarled teeth and dark slits for eyes, the slithering creatures combine old school folklore with modern day myths of femininity, and all the nasty fears that come along with them. 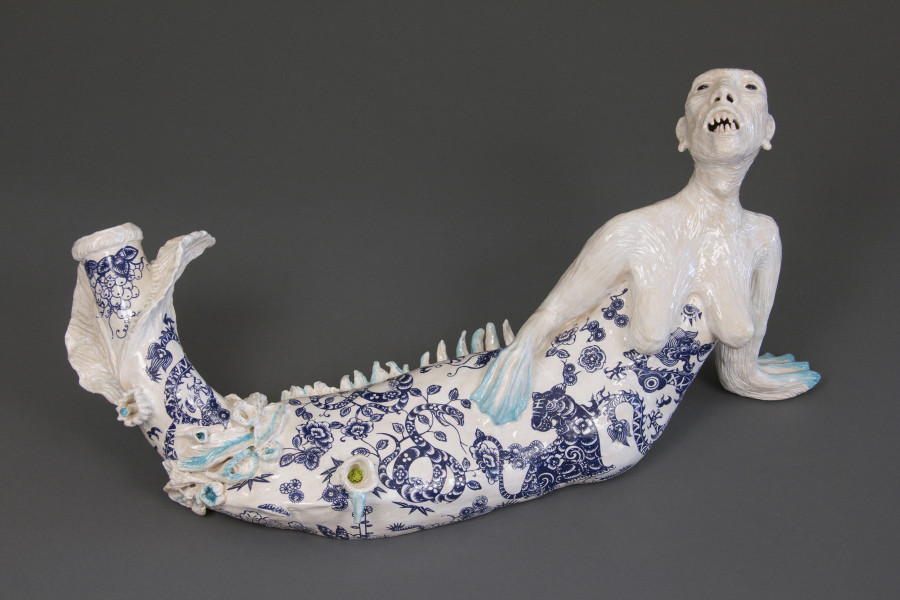 "I read a lot about evolution and biology," Jackson said in a 2011 interview with Ceramics Now. "Much of my inspiration comes from National Geographic magazine. So, I would say I am strongly influenced by theories related to evolution. Because of this, I see animals as being our ancestors, our kin. I am curious about our tendencies that may be subconscious -- violent tendencies, in particular. As most people know, chimpanzees are very closely related to humans. And, they can be incredibly violent animals. Acknowledging this may help humans understand our tendency towards violence (from bullies on the playground to wars overseas)."

Incorporating contemporary tokens ranging from Black Metal to nail art to Lady Gaga, Jackson forges a series of deformed underwater creatures that resist all modes of categorization -- from an origin point to a species classification. Her nightmarish ceramics realize the mutant forms that dwell in the dim corners of the imagination, fed through ancient folklore and current pop cultural anxieties alike.

Jackson's work is now on view in the group exhibition Neo-Crafitivism at The Parlour Bushwick. See more examples of unsettling ceramic work.