The parents of an 11-year-old Texas girl are thanking God after hearing from doctors that an inoperable brain tumor seems to have disappeared.

Roxli Doss, from Hays County, south of Austin, was diagnosed in June with diffuse intrinsic pontine glioma (DIPG), a highly aggressive brain tumor with a low survival rate. But doctors at Dell Children’s Medical Center in Austin now claim they can’t spot traces of the life-threatening tumor on Roxli’s MRI.

“It’s extraordinarily rare to have this type of near complete resolution of this disease,” Dr. Virginia Harrod, co-chief of the hospital’s pediatric neuro-oncology department and one of Roxli’s doctors, told HuffPost. “It’s unusual and atypical and something we were all very pleased with.”

“Every day we still say it,” Gena Doss said. “It’s kind of our family thing that God healed Roxli.”

DIPG is a tumor that grows from glial cells, a type of supportive cell in the brain stem. This type of cancer usually affects children of elementary school age. According to St. Jude Children’s Research Hospital, about 10 percent to 20 percent of all childhood brain tumors are DIPG.

The prognosis for this disease is “dismal,” Harrod said.

“We don’t have a cure,” she said. “This is considered a terminal diagnosis.”

After experiencing headaches and vision loss for several weeks, Roxli was diagnosed in June with a brain tumor that was well-incorporated into her brain stem, making it inoperable. Doctors at Dell Children decided to start radiation therapy, hoping it would help shrink or at least stabilize the tumor.

Radiation has been shown to extend a DIPG patient’s life by three to six months, Harrod said. But it is not a cure.

Harrod said that she had a frank conversation with the girl’s parents after the diagnosis, encouraging them to make the best of the time Roxli had left.

Roxli received six weeks of radiation therapy. After giving her about four weeks to recover from the effects of that treatment, her doctors took another MRI scan in September to check the status of the tumor.

That’s when Harrod noticed something unusual.

The tumor’s response to the radiation treatment was “remarkable,” the doctor said.

“The tumor was absent and no longer measurable,” Harrod said. “We barely saw any swelling or trace that a tumor had been there.”

Harrod said she hasn’t personally seen this response to radiation treatment in any of her own DIPG patients, although she’s heard from other physicians that it’s happened in a handful of cases.

Harrod said she has a hunch that the positive outcome could be related to the biology of the specific tumor that was growing in Roxli’s brain stem. But because that area of the body is very sensitive to biopsies, it would be hard for researchers to analyze the genetics and genomics of Roxli’s tumor to understand why it responded so dramatically to radiation, while so many others do not.

A biopsy isn’t required for a DIPG diagnosis, Harrod said, and Roxli’s family declined to have one done.

However, the pre-teen isn’t in the clear just yet. Harrod said that because this type of cancer has historically been extremely aggressive, doctors at Dell Children’s have decided to continue treatment. Roxli is currently participating in a research trial and receiving medication to continue fighting the tumor.

“No one wants to underestimate this tumor,” Harrod said. “We need to be very vigilant in monitoring her and getting MRI scans going forward so that we can do our best to continue to make sure she’s in the best health possible.”

Harrod said she and other doctors at Dell Children’s are “cautiously optimistic” about what the tumor’s disappearance means for Roxli’s overall health. (Dell is part of Ascension, the largest Catholic health network in the U.S.)

In the meantime, Roxli’s parents and supporters say they’ve received the miracle they spent months praying for.

“Praise God for His miracle of healing,” her mom, Gena Doss, wrote Wednesday on Facebook. “And for HAPPY tears that I don’t think will ever stop flowing!!!” 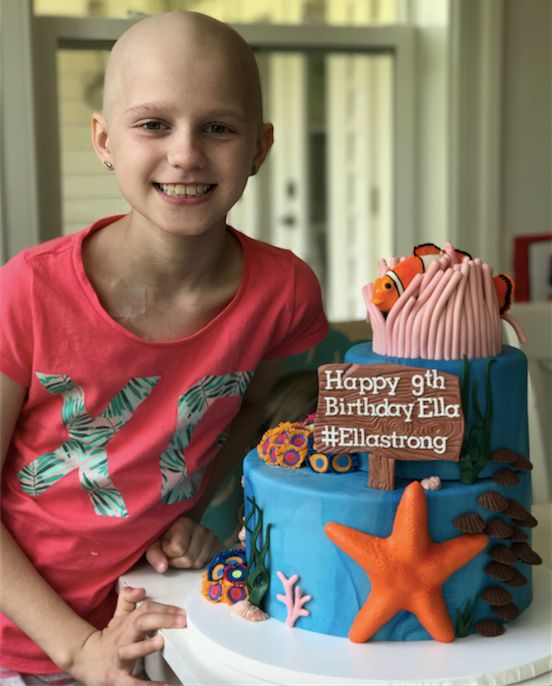 1 / 16
"Our daughter, Ella Edwards, was diagnosed on her ninth birthday on April 28, 2017, with a rare pediatric bone cancer, Ewing&rsquo;s sarcoma. Originally we thought she had a stomach bug, but were devastated to learn this seemingly healthy child, who never even needed an antibiotic in her life, now had a 10-cm tumor at the base of her spine that had metastasized to her lungs. She bravely endured 14 rounds of chemotherapy, six weeks of proton radiation to her lower spine, and two weeks of whole lung radiation over the course of nine months. Despite the horrendous toll it took on her body, she always held a bright smile. She&rsquo;s one of five children, and in October of this year she will be nine months NED (no evidence of disease)!"
Jen Edwards