Roy Hibbert followed up a stellar performance -- 24 points, 11 rebounds -- in the Indiana Pacers' Game 6 win over the Miami Heat on Saturday night by using a homophobic slur and cursing out the media during a bizarre press conference.

On Sunday morning, the 7' 2" center issued an apology.

Discussing his Game 6 focus on helping teammate Paul George defend LeBron James, Hibbert concluded his remarks by saying "no homo." As defined by Slate, this is "a phrase added to statements in order to rid them of possible homosexual double-entendre."

"I really felt that I let Paul down in terms of having his back when LeBron was scoring in the post or getting to the paint, because they stretched me out so much. No homo," Hibbert said after Game 6.

The slight smile on Hibbert's face and brief laugh suggested he thought his use of "no homo" would be received as a joke. Several hours later, Hibbert issued an apology through the Pacers' website on Sunday, expressing "deep regret."

I am apologizing for insensitive remarks made during the postgame press conference after our victory over Miami Saturday night. They were disrespectful and offensive and not a reflection of my personal views. I used a slang term that is not appropriate in any setting, private or public, and the language I used definitely has no place in a public forum, especially over live television. I apologize to those who I have offended, to our fans and to the Pacers’ organization. I sincerely have deep regret over my choice of words last night.

In addition to issuing a statement through the team, Hibbert also reached out to NBA veteran Jason Collins via Twitter. In April, Collins became the first active NBA player to come out as gay.

In contrast to his comments following Game 6, Hibbert expressed support for Collins' decision to come out.

"I have no problem with openly gay men," Hibbert told The Associated Press at the time. "More power to them. We live in a day in age where people are more accepting as opposed to years ago. Him and his family may have some adversity in the coming days and weeks, but I have no problem with it."

Hibbert's use of homophobic slang was not the only part of the press conference likely to draw a fine from the league office. The 26-year-old center also referred to members of the media as "y'all motherf---ers" when asked about his 10th place finish in Defensive Player of the Year voting. 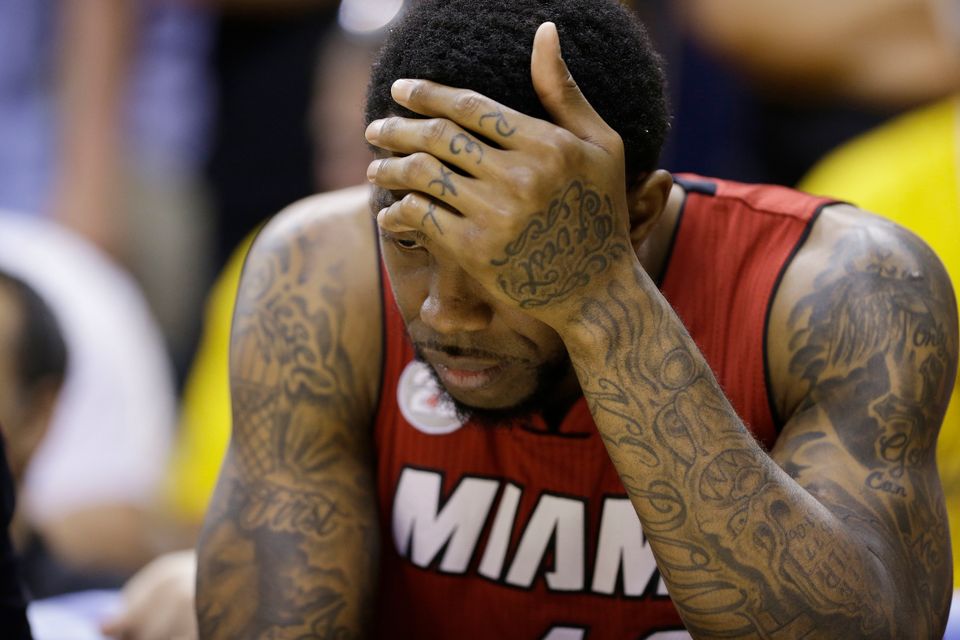 1 / 90
Miami Heat forward Udonis Haslem reacts on the bench during the second half of Game 6 of the NBA Eastern Conference basketball finals against the Indiana Pacers in Indianapolis, Saturday, June 1, 2013. Pacers won 91-77. (AP Photo/Michael Conroy)
AP