If you've been pondering what $50 million could snag you in the contemporary art world today, Sotheby's has an answer, and it looks like this: 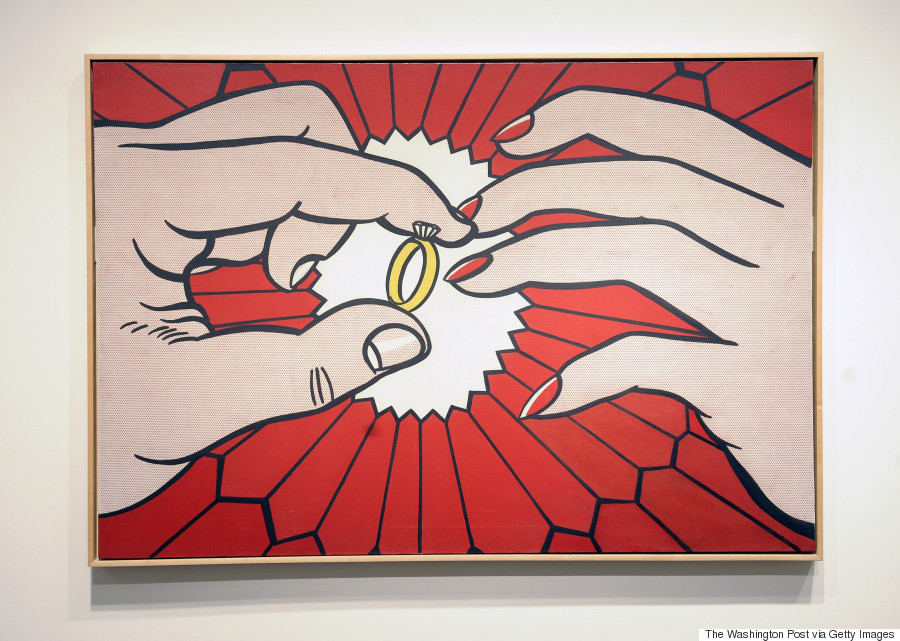 Above is the work of Pop Art darling Roy Lichtenstein, who in 1962 created the comic book homage that is "The Ring (Engagement)." As of last week, the painting -- which reveals a phantom hand placing a ring on another expertly manicured finger -- is expected to fetch somewhere "in the region of $50 million."

In a press release for Sotheby's Contemporary Art Evening Sale, set for May 12 in New York, the auction house states that the work "encapsulates all of the major themes" in Lichtenstein's "most acclaimed and sustained body of work." The painter of all things Ben-Day is known for his appropriation of comic book tropes, from hesitant women in love to, well, even more hesitant women in love. Rendered on large canvases, the works remain some of the most recognizable pieces of American art, as commercial as they are classic.

For those who know the images better than the man himself, Manhattan-bred Lichtenstein rose to fame in the 1960s, coming off a series of stints as a university instructor in Ohio and New York. In 1961, Lichtenstein met with an art dealer at Leo Castelli Gallery, a notable New York institution that would go on to stage the artist's first major one-man show there the following year. The event was a sold-out affair, which quickly situated Lichtenstein alongside Pop Art greats like Andy Warhol and Tom Wesselmann, icons who routinely used popular media like advertisement and kitsch as inspiration for fine art.

Later in his career, Lichtenstein transitioned from comic-inspired paintings to works based on the rational geometry of Art Deco and even into three dimensions with his series of sculptures. But his onomatopoeia-laden early works are what we remember. As Holland Cotter wrote in 2012: "Roy Lichtenstein developed a deft, tight, virtually foolproof art style, one that was based on agility rather than brawn and, though narrow in range, was capable of surprising variations and extensions. The look of this art isn’t big, but it’s smart; cool and dry, but accessible. Connoisseurs and know-nothings alike can enjoy it, and for some of the same reasons."

"The Ring" will be on view at Sotheby's Los Angeles this week in preparation for the sale. The piece, plucked from collection of Chicago businessman Stefan T. Edlis, has previously been seen at London's Tate and Tate Modern; the Fondation Beyeler in Basel, Switzerland; the National Gallery of Art in Washington, D.C.; the Art Institute of Chicago, and Paris' Centre Pompidou. For approximately $50 million, it could grace your mantle too.