This post was originally published on the Detroit Data and Democracy Project.

Detroit Public Schools Emergency Manager Roy Roberts had some fabulous news (see video below) to share on NBC's Education Nation Detroit Summit this past Friday morning. DPS had surpassed the Michigan state average in 14 of 18 categories measured by the state's student proficiency test, the MEAP. Applause and accolades followed Roberts' pronouncement. Chelsea Clinton divulged that she would entrust her own children to the emergency manager's schools.

Notably, the jubilant mood at the summit was not dampened by any of the usual naysaying. There were none of the niggling challenges to Roberts' assertions. The day's take-home message was clear -- Roberts and his staff were finally turning the corner with Detroit's long-suffering schools. Education Nation, take note.

Given all the recent bad news in Detroit, Roberts might be forgiven if his facts were a bit off the mark. It turns out, according to the Michigan Department of Education, that DPS did not outshine the state in 14 of 18 MEAP categories. The actual number was somewhat lower -- zero. DPS trailed the Michigan average in proficiency in all 18 categories. And not just by a bit -- by more than 10 percentage points in the two science categories, and by 20 or more in the other 16. But it was a happy moment at the summit. No one -- not one panelist, not one moderator, not one preselected member of the audience -- raised an eyebrow over Roberts' innovative facts. 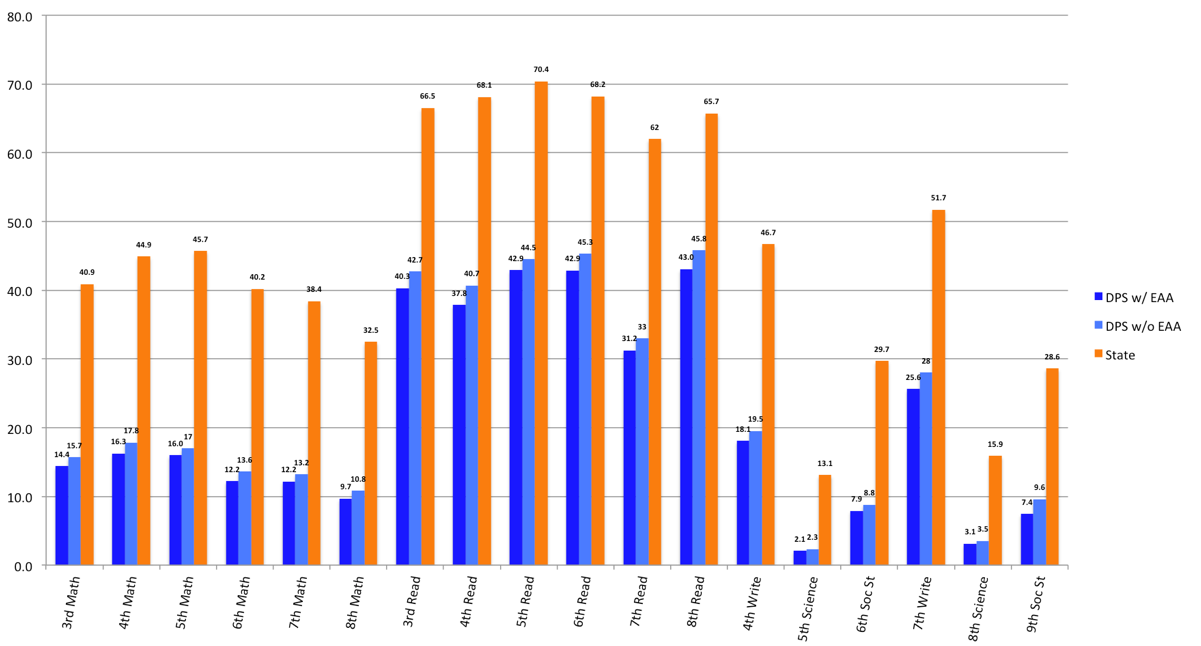 Perhaps Roberts had merely stumbled over his own words. Maybe he really meant to say that DPS schools were gaining ground on the Michigan averages -- that yes, DPS was still behind, but was steadfastly narrowing the achievement gap in 14 of the 18 categories.

Unfortunately, that's not the story the MEAP numbers tell either. 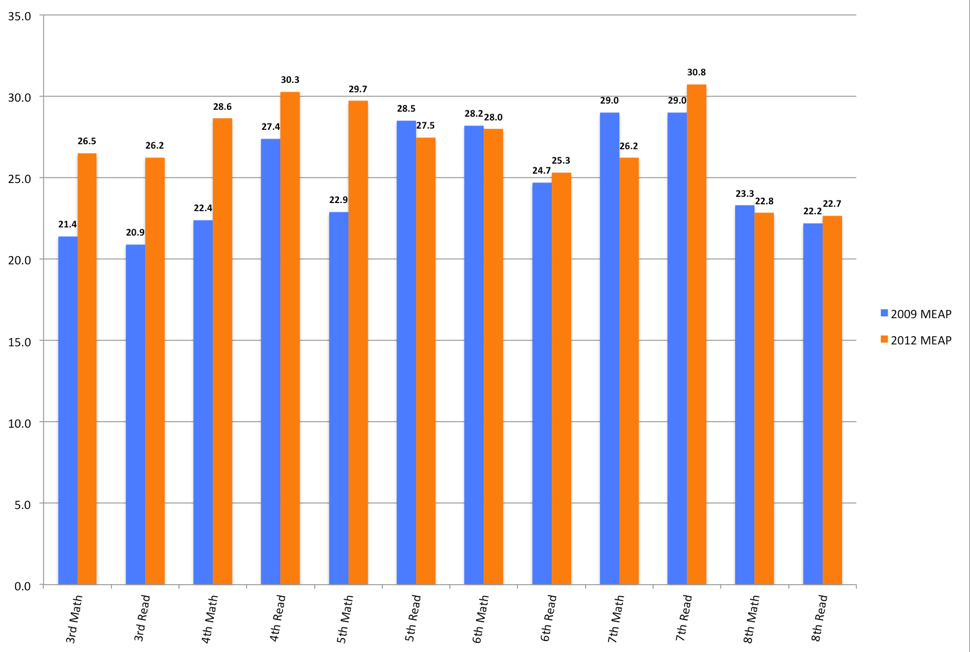 Click to enlarge: Proficiency Gap between DPS and the State, 2009 vs 2012, using new MEAP cut scores

Instead they show that the Detroit Public Schools have fallen even further behind the state average since gaining an emergency manager in 2009. The picture the numbers paint is particularly bleak when the 15 schools handed to the EAA just before the fall MEAP administration are factored in. They show that Detroit's third through eighth graders continue to lose ground in reading and math proficiency in most categories.

The hardest hit have been our youngest test takers -- those who have spent most of their school years under emergency management -- our third, fourth, and fifth graders. Although Detroit students scored among the worst in the nation in 2009, Detroit's third graders have since fallen 5.3 percentage points farther behind the state average in reading proficiency. In math, they have fallen another 5.1 percentage points below the state average.

We hear again and again that Detroit's children must be prepared to compete in the 21st century global economy. If the proficiency gap between Detroit's children and the Michigan average is any indication, our children have only fallen further behind these past four years. Just don't tell Chelsea Clinton -- enrollment is also down sharply, and the emergency manager could desperately use a few more bodies.