Roya Sadat was one of the first female filmmakers to emerge after the fall of the Taliban regime in Afghanistan. She studied law and political science at Herat University but her real passion was in film. Even while prevented from working during the regime of the Taliban, Sadat would write scripts for plays and movies. She directed her first feature film, 'Three Dots', after the fall of the Taliban and established Roya Film House, the first independent Afghan film company founded by women, with her sister. In 2006, she was awarded a scholarship to study at the Asian Film Academy in South Korea. She is a co-president and co-founder of the International Women's Film Festival in Afghanistan. 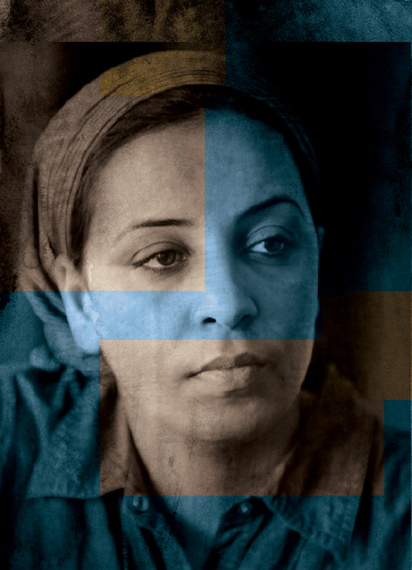 Can you tell us about a time when your civil rights were violated, something which has influenced your life?

The most extensive violations of human rights occurred during the reign of the Taliban. Even though I was too young to wear the chador, I wore it because of the repressive conditions and to avoid any risk. One day, I went to the bazaar with my mother and my sister. The Taliban arrived in cars to beat up the women who were shopping without any close male relatives accompanying them. This was a rule under the time of the Taliban - women had to be accompanied by a male relative 'chaperon' outside the home. We needed to find an escape route. Fortunately, just as the Taliban were approaching us, we ran into a house and hid from them.

What are some important achievements of the new era in Afghanistan?

I have so many bitter memories of the Taliban era and the time before it, but I'm rather optimistic about the new era. There have been many positive and valuable changes in a range of areas in the past 10-12 years. In comparison to the amount of money that flew into the country, however, much more should have been done. But there have been many positive changes for women in respect of their rights, and access to health and education. Another achievement has been the emergence of numerous media outlets, in particular audiovisual media.

What gives you hope in the new era? What do you see as a positive development?

The developments in respect of women, the mass media, the means of communication, and human rights laws are initiatives we have never experienced before. All of these developments are promising.

I have a very deep fear that the fundamentalists will return and re-take political power in this country. I worry that we could lose even the very minimal changes that have come about in Afghanistan if the Taliban returned to power.

The biggest challenge, in the first step, is security. If security is lacking in a country, the economic system and the social structure will be shaky and unstable. Another challenge is illiteracy and low level of literacy.

The accomplishments of the past 10 years did not come from within the society, nor were they spontaneous and organic - they were all projects set up with a short-term perspective. This is why they have left very little impact in terms of restructuring the social structures. The traditional structures of society still present a big challenge.

Will the present-day Afghanistan allow a recurrence of the closing of schools to girls and the blocking of women's social participation?

In my opinion, the fact that the schools closed under the Taliban without any major popular resistance was a sign of the level of resignation within the society after so many sustained civil wars. The conditions have changed extensively now, and children and young people have rushed en masse towards education and higher education. When I look at Afghanistan today, I don't believe it would be possible to again close the schools to girls.

Can you tell us about a time when the human rights of a woman in your family or circle of friends were violated?

During the Taliban's reign, we used to make one of our sisters dress in men's clothing so that we could easily go outside to the house with her as our 'male chaperon'. She even changed her name to Sohrab, a boy's name. This has left such an impact on her. She has tried to escape from her female identity, to hide it. It has taken her a long time to recover.

What are some factors which deter women's participation in social, economic, political and cultural spheres?

Before we think about the institutions like society, tradition and laws as deterrents, we have to realise that it is the absence of self-confidence among women themselves that creates a major obstacle to their participation. Alongside this sits the low level of awareness among women of their rights. Even our most educated women remain strongly influenced by men, because they lack knowledge of their natural and legal rights. I know female university professors who teach in important academic centres, but are not allowed to be outside the house after 4 pm! Patriarchy in Afghanistan does not recognise class, and is not confined to the rural or poor people. It's just a question of differing levels and types of controls.

What are some major things women are seeking to change?

One of their most pressing demands is to open up space and create channels through which they can raise the level of awareness amongst women. Women also want security. I mean security of people in the cities - social, job, legal security. If a woman goes to court today, even once, she will be shunned by her whole family for being a 'rebellious woman'. In contrast, a man who has just been released, after spending several years in prison for a crime, would be warmly welcomed by his family and friends. Women are also tired of having symbolic importance; they don't want to be the ultimate trump card of politicians anymore.

What the sources and centres of power which women can rely on to promote their rights and demands?

There is the Ministry of Women's Affairs and most other government ministries also have specific sections concerning women, but in my opinion the most important source that women can depend on is their own willpower. Everything the governmental and non-governmental institutions have done for women is temporary. Nothing will fundamentally change until women create a movement amongst themselves.

Do you have a specific message?

For years, women have been dragged along by different political currents. They have been the main victims of the war in this country. No political system has ever released women from its constraints. All of the political powers have misused women's identity. Now is the time for awakening.