Okay, so I'm a royalist. I admit it. Simply put, I love tradition, and nowhere else in the world can you find such pageantry and history and tradition as in London. The city defines the word civility: Londoners are famous for their politeness and sense of humor. If you've been to London, you know what I'm talking about. This summer, the city has an over-the-top, Disneyland-like feel: Wimbledon began yesterday, June 25; the Summer Olympics follow on July 27; and the world witnessed the five-day Diamond Jubilee Celebration earlier in June. Plus which, on the third week of June, Harrods's semiannual 70 percent off sale was in full swing, and it was worth enduring the long checkout lines. There was lots of pushing and shoving going on to find the perfect pair of shoes. I just hope I didn't hurt anyone! Union Jacks and bunting were in abundance at all the major arteries, and construction on the Pall Mall, in anticipation of the XXX Olympiad, snarled traffic and made crossing the street an even more perilous undertaking. 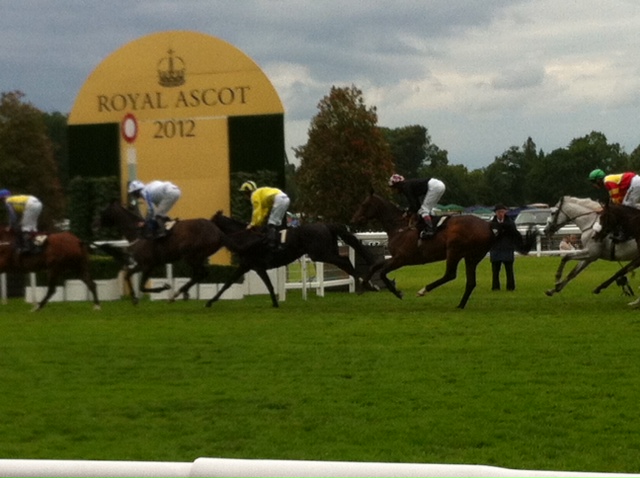 All the world's a stage, / And all the men and women merely players.
--William Shakespeare

What Is Royal Ascot?
Ascot is a famous series of horse races that take place over five days on the third week in June. Each day follows the same format: At 2 p.m., the royal procession makes its way to the Parade Ring. Because my husband and I were seated in the Royal Enclosure, we were ringside when the queen and Prince Philip arrived in their horse-drawn carriage and were seated in the Royal Box, which is in the Enclosure. The first race begins at 2:30 p.m. and the last one at 5:35 p.m. The five-day attendance tops 300,000, but the Royal Enclosure holds approximately three thousand people. Ascot is always considered the pinnacle of the British social season, but because 2012 is the historic year of the queen's Diamond Jubilee, the pageantry seemed even more meaningful, especially since the queen owns the racecourse, which is just a few miles from her weekend home, Windsor Castle. 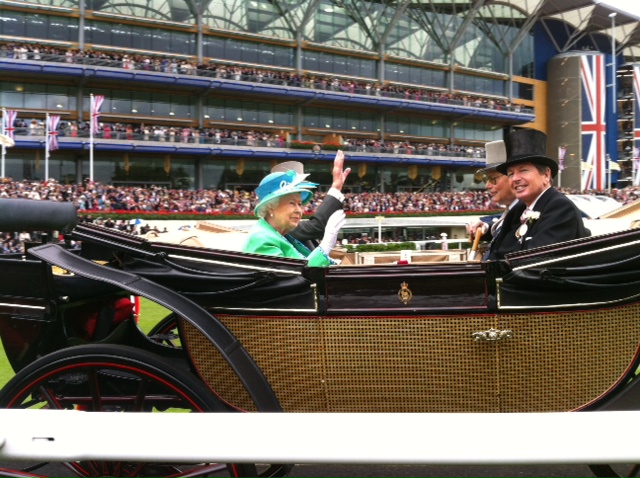 It's no secret that the queen loves horses and horse racing. She owns and breeds her own stables of horses, follows the sport religiously, and receives the Racing Post on a daily basis. And the stakes at Ascot are high, though it is always pointed out that the queen herself does not bet on the races. On day one of this Ascot, the big story was Frankel, a horse named for Bobby Frankel, the late American horse trainer and the father of Bethenny Frankel, the creator of Skinny Girl Margarita. Frankel, a horse that many say could one day outrun Secretariat, won the race by the biggest margin ever in horse racing. On day four, the queen's horse, Estimate, took first prize, and Prince Philip presented the queen with her winning trophy. On day five, the favorite was Black Caviar, an Australian horse that has won his last twenty-one races. The Diamond Jubilee Stakes race made it twenty-two wins, by a nose! The queen presented the trophy and patted the winner on the head.

The Stage Is Set
A strict dress code applies to the Royal Enclosure, distinguishing it from the rest of the crowd at Ascot, where a party atmosphere prevails. Our Ascot hosts for the weekend, Despina and Stephen Blundell, summed up Ascot in general this way: "One's expectation of the ambience is that it will be very My Fair Lady--super elegant--when in actuality racing in England is about the only thing that mingles all levels of society. The Duke of Devonshire could be standing next to a salesperson at Marks & Spencer. Anything goes once you step out of the Royal Enclosure." A quote from a character in the novel Snobs, by Julian Fellowes, who also wrote Downton Abbey, reveals an even more jaundiced view of Ascot: "Like many famous institutions, the image and the reality of the Royal Enclosure at Ascot bear little or no relation to each other. The very name 'Royal Enclosure', to say nothing of the glutinous coverage in the low-brow press, conjures up visions of princes and duchesses, famous beauties and rand millionaires strolling on manicured lawns in haute couture. Of this picture, I can, I suppose, testify to the quality of the lawns." 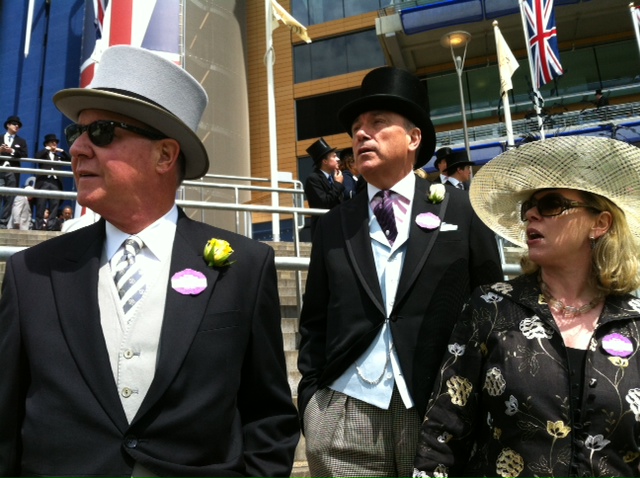 The rule of formal dress in the Royal Enclosure was originally established by that noted dandy Beau Brummel, but a new dress code was set in place when the first Royal Enclosure Style Guide was issued in 2012. As January headlines in the English news magazine The Week noted, "Ascot bans fascinators and minis. Racecourse tightens dress code over concerns that Ascot is coming to resemble a nightclub." When our tickets arrived with the sixteen-page style guide for men, women, and children, I read it cover to cover, and found these rules: Women must wear hats, but not fascinators, those little clip-on concoctions that so many women wore perched just above one eye at the royal wedding. Dresses and skirts must be of "modest length," which was defined as no shorter than "just above" the knee; "trouser suits" (dressy pant suits) are welcomed as long as they are full length and matching in color (perhaps to match the queen's famously monochromatic look?). Dresses must have a strap of one inch or greater in width (no spaghetti straps), and no strapless, off the shoulder, or halter dresses are permitted. Lastly, women are warned that "midriffs must be covered."

The fashion police, known as Dress Attendants, were out in full force at entrance to the Royal Enclosure. If dress straps were not wide enough, a shawl was given to a guest. As for those outside the Royal Enclosure, as far as the eye could see, people were dressed with abandon; sightings included dresses worn far too short and without undergarments, and lots of exposed skin revealing tattoos.

London Is Not England
Despite the country's current economic woes, Range Rovers, Bentleys, and Rolls-Royce's were everywhere in London. A London cabbie informed me en route to the theatre one night that "London is not really England. It has become very multicultural with over three hundred languages spoken. To find the true British people, one has to travel to the country villages." A somewhat more progressive view, which I share, is that London represents a new England, which still has at its heart the royal family, and I always love seeing the royal side of the city, visiting Buckingham Palace and the Royal Mews (where the royal horse-drawn carriages, as well as their horses, and motor cars are kept). Our guide said that the Palace has its own post office, and that the queen receives over one thousand letters a week. My bet is that when she responds to any of them, she doesn't use e-mail.

London Revealed
The city this year really was fit for a queen, and my visit consisted of ten days of jubilation, touring Spencer House and the Houses of Parliament, the Churchill War Rooms and Blenheim Palace, Wimbledon and the Wallace Collection, Duke of Wellington House and St. Martin in the Fields. And as a proud royalist, I was careful the entire time to mind the gap, along with my P's and Q's, and above all, to keep calm and carry on.

As director of protocol for the city and county of San Francisco, Lisa Grotts greeted the Duke of York, more commonly known as Prince Andrew, among many other distinguished visitors. Last spring, she covered the royal wedding for the Nob Hill Gazette. Follow Lisa on www.Facebook.com/LisaGrotts and www.AMLGroup.com.