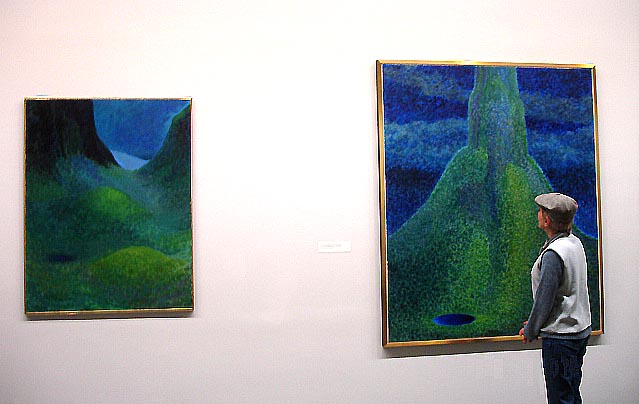 This year, the people of Denmark celebrate Her Majesty Queen Margrethe II's, 40-year reign within their kingdom. Among the many celebratory events scheduled throughout the year, the Arken Museum of Modern Art is hosting an exhibition of Queen Margrethe's personal book illustrations, art, fashion, design, and movie creations.

"The Essence of Colour" exhibit is the biggest exhibition to date of Her Majesty, the Queen's art, consisting of one hundred and thirty-five works.

While attending the exhibit on a rainy weekend in April, I was inspired by the scope of this unique art show and enjoyed mingling with the other warmly dressed visitors and observing their reactions, as well.

Educated in prehistoric archeology, political science and economics, Queen Margrethe has had no formal schooling in the arts. She has, never the less, been quite prolific in her artistic endeavors and has done book illustrations for the Danish edition of The Lord of the Rings, created ceremonial wear for Danish bishops, costume design for the movie of Hans Christian Andersen's Wild Swans and sets in screen adaptations of Hans Christian Andersen's The Snow Queen. Queen Margrethe has mastered a wide range of media and styles in her art, ranging from mystical landscapes, surrealistic decoupage, and thought provoking paintings of stones and bones.

One painting, in particular, "From the Furthest Mountains" caught my eye. The artwork depicts a view though a valley, with ocean and sky in the background. Made from small strokes of paint ranging from light green, over green to light and dark blue to dark blue green. The variation in shading creates the illusion of two small hills, which seems to be touched by the afternoon sun. A collection of dark blue brings up the impression of a small watering hole and it is not unlike scenery from a fairytale.

The Danish people have loved Queen Margrethe since her birth during the Second World War. At that time, the royal family represented continuity and hope for the nation. When she took over the throne from her father King Frederick IX in 1972, she signaled the changing position of women in Denmark, with the altering of the succession laws that gave female children equal rights with the males to inherit the throne of the 1000-year-old monarchy.

When leaders inhabit the values, beliefs, and attitude of their community and behave in a manner consistent with its members, they will be followed. When these same leaders inspire through creative actions they will also capture their hearts. Queen Margrethe, as a mother, a Queen and a Dane has been an intricate part of the progress of her nation, despite not being allowed to vote and having no political power. Over the years, she has helped to transform the country from a homogeneous, monocultural farming nation, exporting bacon and butter to a heterogeneous, multicultural creative economy driven nation. As a truly modern monarch, Queen Margrethe is not just a remote public figure but truly understands how to be an inspirational Queen for the Danes.