Annus horribilis no more. The London Evening Standard exclaimed, "Bride and Joy." The Sunday Times said, "You had to be there." Suzy Menkes of The International Herald Tribune dubbed Kate Middleton the first royal bride of the digital age. The Daily Telegraph: "In 1981, the public were spectators. Yesterday they felt like guests." As one of the eyewitnesses, all of the above rang true for me!

The Windsors have tied the knot yet again. But the wedding of this century has turned out to be very different from the one in 1981 when Prince Charles wed Lady Diana Spencer. On April 29, all eyes (and expectations) were on Kate. It was a party fit for a princess, Downton Abbey on steroids. As the site of history in the making, London was a media and tourist mecca. Every billboard and newspaper in sight featured Prince William and Kate. Tabloids were abuzz that the estimated wedding cost would exceed 30 million pounds (the Middleton family chipped in for their daughter's wedding dress). Makeshift tents were set up along the procession route known as the Mall (a road that runs from Buckingham Palace, where the couple would travel by royal carriage). An estimated one million people crowded the streets to get a peek at the young royals. Harrods, the venerable Knightsbridge department store where you can buy everything from keys to pianos to coffins--and now Krispy Kreme donuts can be added to the list of treasures --got it right! Their Brompton Road windows displayed elaborate five-tiered wedding cakes designed by the likes of fragrance queen Jo Malone, British fashion designers Alice Temperley and Paul Smith, and the fine-china company Wedgwood. The windows were painted around the edges to make the displays seem like the interior of gold carriages right out of a London fairytale.

Puttin' on the Ritz
During the ceremony, we watched at the Ritz Piccadilly, across Green Park from Buckingham Palace, with hats and gloves in place. The hotel hosted an elegant wedding brunch, complete with Champagne, traditional British canapés, and Eton mess, a dessert named after the boarding school the prince attended. With smart phones in hand, we were hopeful there would not be a breach of royal protocol. Can you imagine the queen turning (and glaring) to see whose iPhone was playing "God Save the Queen"? Seated to our left were guests who had attended the wedding ceremony. They were members of the Order of the Garter (the highest order of knighthood in England). On our right was bespoke tailor Geoffrey Golding, who holds a royal warrant from the queen. His marigold-colored uniforms were worn by horsemen in the parade and have become exemplars of military tailoring.

Discretion, Discretion, Discretion
The royals' media operation was flawless, and not only in concealing all details regarding the dress of the century (even Vogue's Anna Wintour was not in on the secret). At the Richard Ward Salon in Chelsea, where Kate gets her hair done (me too), stylists denied even knowing her!

All Things British
You've got to hand it to the Brits: they redefine the meaning of the word pageantry. At every turn, oversized Union Jacks lined the streets, and the wedding went off without a hitch, although the BBC reported that the bride was fashionably late (30 seconds to be exact!). Perhaps the only disappointment of the day was the royal title bestowed on the new Windsor, but protocol dictates that Queen Elizabeth cannot skip lineage. Diana became a princess because her husband was the heir to the throne. According to Debrett's Correct Form, the bible of peerage, as far as titles are concerned, the Duchess of Cambridge is not half bad (especially since, as we kept being reminded, Kate was formerly a "commoner").

Thoroughly Modern Middleton
Even though she must follow royal protocol and walk two steps behind her prince, this princess may be making many of her own choices, and she will have plenty of help in doing so. By all accounts, Kate seems grounded, even though her father was an airline officer and her mother a flight attendant. A life in the public eye demands discipline and organization. We already know she has the charm and personality to follow her own destiny, so why the fascination with Kate? Perhaps it's her common roots that many can relate to. She is refreshing in an un-royal sort of way, and she has all-American looks even though she has never stepped foot in this country. That will change this summer when the duke and duchess plan to visit the David Beckhams in Los Angeles.

Generational Change
The couple broke with royal tradition in more than one way. The bride wore blue jeans at her wedding rehearsal, and their exit in Prince Charles's Aston Martin was icing on the cake. In lieu of wedding gifts, they asked for donations to their favorite charities, one of which dealt with teen bullying, something that Kate faced as a young girl. And even the site of the wedding was given a personal note, decked out with full-grown trees to resemble and English garden from her hometown in the village of Bucklebury. And in a touching personal note, spectators who visited the Abbey in the days before the nuptials were asked to pray for the young couple.

People's Princess, Part Deux?
At 29, Kate has been called the "Queen of Hats." From feathers to those very English fascinators (small hats that attach to the front of the head), Catherine Middleton, the Duchess of Cambridge, has taken up where Princess Diana left off. Her fashion sense is refreshing: tasteful and classic, it will only grow with time. When the duchess smiles, her face lights up like a 100-watt light blub. Along with her perfect posture, she carries herself with great ease and confidence. She has a style that Prince William noticed long ago. Says Vogue style director Alexander Kotur: "Kate Middleton has a wonderful youthfulness about how she wears clothes and seems to equally enjoy putting on her jeans for evening out with her friends in London as much as she does a whimsical feathered hat for a wedding or a colorful long satin evening dress for a black-tie party."

After a decade of being William's girlfriend, Kate has been accepted into the Firm. By all indications, she's up to the challenge.

Postnuptial Bliss
The wedding of William and Kate offered pomp and circumstance not witnessed in a long while. All involved played their roles to a T. It was a day that will be long remembered, with tulips and love in bloom. Kate and her prince are the future of the British monarchy, and the Windsors have come full circle: they have risen to the new media. The morning after the wedding, a Sloane Street newsstand proprietor offered up his assessment of the queen-to-be: He said that Catherine was the most beautiful girl he'd ever seen. "That she's the great-granddaughter of a Cornish miner is the most beautiful part of all," he told me. "She's one of us." Fairytales do come true. God save the queen. And long live the (future) king! 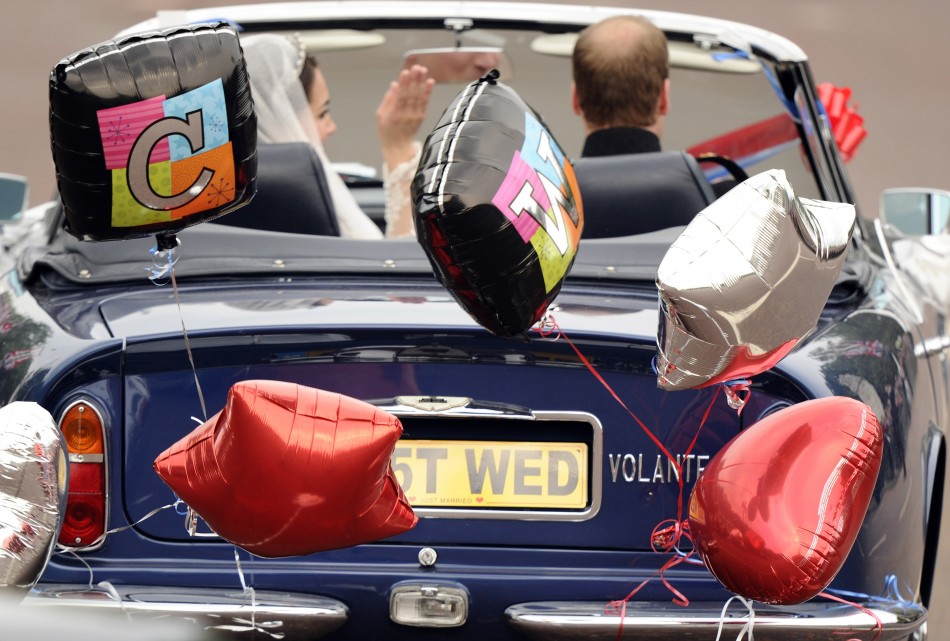 Lisa Mirza Grotts traveled to London to cover the Royal Wedding of Prince William and Catherine Middleton for the Nob Hill Gazette in San Francisco. She became an anglophile during her junior year abroad at Oxford University. She is a recognized etiquette expert, on-air contributor, and the author of A Traveler's Passport to Etiquette. Ms. Grotts is the president of her own firm and writes an etiquette blog for Huffington Post. Her iphone app, etiquetteagogo, will debut next month on apple.com. PRINTED BY PERMISSION OF THE NOB HILL GAZETTE.