LONDON - Keep an eye on the mailbox -- Britain's Prince William and bride-to-be Kate Middleton have sent out invites to their hotly anticipated royal wedding to around 1,900 guests.

Military personnel and charity workers will mingle with European royalty, diplomats and the family and friends of the couple at the Westminster Abbey ceremony on April 29, St. James's Palace said Sunday.

Queen Elizabeth II and the Duke of Edinburgh will lead a group of 50 members of the British royal family at the wedding, while around 40 representatives of foreign royal families -- likely to include dignitaries from Spain, Sweden, Norway, Denmark and Greece -- will also attend.

It isn't yet known whether celebrities including singer Elton John -- a friend of William's mother Diana, the Princess of Wales -- or Kanye West, a favorite of the prince who performed at a 2007 tribute concert for his mother, are among those who'll receive a prized invite.

Take a look at the invitations and scroll down to keep reading. 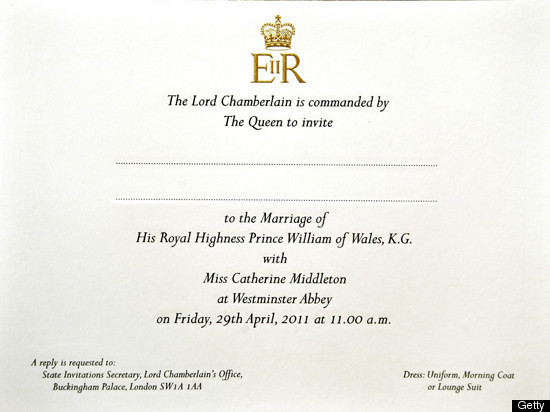 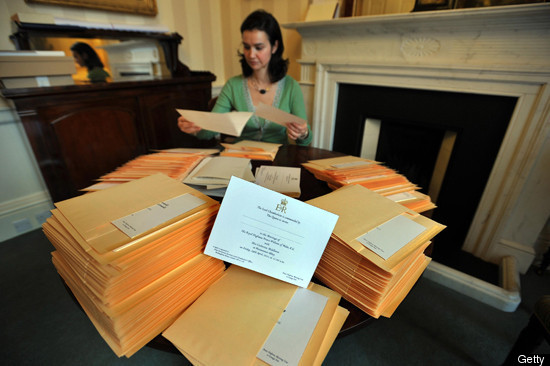 Britain's Sunday Express newspaper reported that footballer David Beckham and his wife Victoria are on the royal guest list. William worked with Beckham on England's failed bid to win the right to host the 2018 World Cup.

In a statement, William's office insisted it would not disclose details of individual guests. Royal officials also declined to confirm reports that William's aunt, Sarah Ferguson, the Duchess of York, won't be invited.

"I think what this tells us is that they are a very traditional couple," Vickers said. "It strikes me as an entirely sensible and predictable type of list, looking to balance the need to invite all the people who should be there -- because William will one day be king -- with inviting those who they want to be there."

Ordinary well-wishers will instead throng the capital's streets, watching Middleton arrive at Westminster Abbey by car, but leave with her new husband in a horse-drawn carriage to parade through the heart of ceremonial London to Buckingham Palace.

Tourists and Britons alike will crowd close to the palace after the ceremony, hoping to catch a glimpse of William and his bride as they present themselves on the building's famous balcony.

Millions more will watch the ceremony and celebrations on live television -- crowded around screens in their homes, at street parties in towns and villages and at major landmarks. Lawmakers are already lobbying London Mayor Boris Johnson to install a giant screen in the city's iconic Trafalgar Square.

Britain's Foreign Office said royal officials had sent their regrets to Estibalis Chavez, a 19-year-old fan who has protested outside the country's embassy in Mexico City demanding an invite.

At Westminster Abbey, Prime Minister David Cameron and his deputy Nick Clegg will likely be among 200 lawmakers, government staff and diplomats invited -- with high-profile ambassadors also expected to attend.

Leaders of several Commonwealth nations -- and the governor generals who represent the queen in Canada, Australia and New Zealand -- are also though certain to be included among guests.

Vickers said many European royals likely to attend are closer in age to William, second in line to the throne, than his father Charles -- suggesting the guest list may have a more youthful feel than royal weddings of the past.

William's office said about 1,000 guests will be the family and friends of the prince, his bride and their parents. Roommates who lived with William and Middleton as they studied at Scotland's St. Andrews University, young entrepreneur Guy Pelly and television reporter Tom Bradby -- who conducted the only interview with the couple following their engagement -- could all receive an invitation.

Around 80 guests will come from charities which William supports, including African wildlife charity Tusk, and Centrepoint, which helps young homeless people.

Thirty members of the armed forces, likely to William's colleagues from his Royal Air Force search-and-rescue unit, will also attend, as will representatives from the Church of England and other faiths.

Many will look to the guest list for clues on the status of Prince Harry's on-off relationship with Zimbabwe-born lawyer Chelsy Davy. William named his younger brother as his best man, while Middleton's sister Pippa will act as her maid of honor.

Vickers said the royal couple faced a challenge familiar to all those planning weddings when drawing up their guest list.

"You need to remember all the people who've worked with and helped you over the years -- from the kindergarten teachers, to the person who taught you to swim ... I think we'll see some of those people included," he said.

William's office said the invitation cards -- with text die-stamped in gold and gilded edges -- were mailed out in pale brown envelopes on Wednesday and Thursday. Each bears the queen's royal seal and invites guests to attend the ceremony at 11 a.m. Attendees are asked to dress in "uniform, morning coat or lounge suit."

Around 600 people will later attend a lunch reception at Buckingham Palace hosted by the queen, while just 300 are invited to a formal wedding dinner and dance at the palace.