Baseball fans attending the Kansas City Royals and Chicago White Sox game got more than they bargained for on Thursday: extra innings and a bench-clearing brawl.

MLB.com broke down what possibly ignited the fight in Chicago’s U.S. Cellular Field:

The fracas began at the close of the seventh inning when White Sox outfielder Adam Eaton grounded the ball back to [Kansas City pitcher Yordano] Ventura and then shouted at the Royals ace, who caught the ball and then held it toward Eaton and shouted something in return before throwing to first for the final out of the inning. Eaton never made it to the bag and turned back toward Ventura as the benches and bullpens of both teams flooded the field.

However, it seems like tensions were brewing throughout the night, as the announcer said during the previous inning, both teams were "screaming at each other." 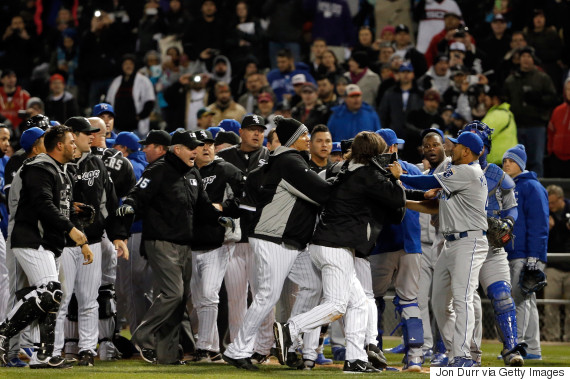 MLB.com also noted that there has been "bad blood" among the two clubs since the season started and a handful of batters being hit with pitches surely didn't help.

The incident led to five ejections total -- three players from the Royals and two from the White Sox. After the game, Royals manager Ned Yost said Ventura needs to “work on controlling his emotions from here out."

Two of those ejected were Kansas City's Lorenzo Cain and Chicago pitcher Jeff Samardzija. The pair seemed to be making up for lost time after Samardzija beaned Cain in their season opener.

It only adds to what has already been a pretty chippy season for the Royals, who had similar tensions with both the Oakland A's and the Los Angeles Angels, The Kansas City Star reported. Ventura, who was ejected in his last appearance, the paper said, acknowledged his bad behavior.

“He recognizes that some of his actions are putting him in a less than favorable light, as well as the team, which is very important to him,” said Jeremy Guthrie, who translated for Ventura. “So he wants to work on it, and be better. It’s something he needs to work on.” 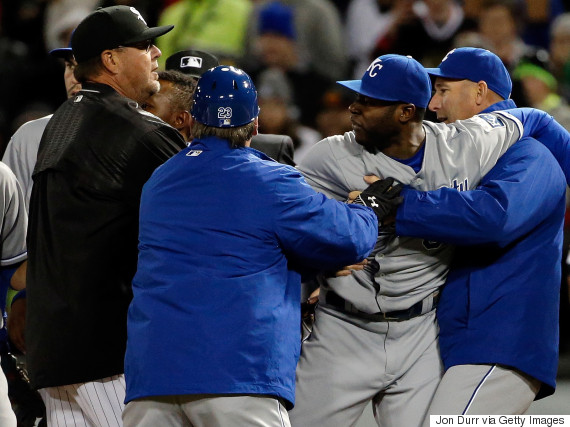 Nevertheless, the Royals pulled off a 3-2 win in 13 innings over the White Sox.