Terms |
Privacy Policy
Part of HuffPost Media. ©2022 BuzzFeed, Inc. All rights reserved.
We're chiming with coverage of Wednesday's Radio and Television Correspondent's Dinner in D.C. — check out our
exclusive interview
with featured entertainment
Mo Rocca
on what he learned sitting next to
Vice-President Dick Cheney
at the dinner — but since it's Friday, here are some pics from the event, along with some random recollections of what we saw wandering around the massive Washington Hilton, where 2,400 politicos and journos packed in together to enjoy a delicious dinner of fish and beef (unless you were a vegetarian) and the chance to mix and mingle with and gawk at the famous faces of C-SPAN and cable (yes, that
was
Lindsey Graham
, thank you very much!). Also
Rahm Emanuel, Chuck Schumer
,
Mike Huckabee
and
Tom Ridge
, who inverted the usual and was much taller than he looks on TV. I know, I'm leading with the good stuff, right? Okay, here's what I saw on my meander to the table:
Advertisement
Advertisement

Roger Ailes wouldn't let us take his photo — something about how the commenters at HuffPo are merciless (what? you guys?), so that last visual is the best we can do. All things considered, it's not that bad. Some more pics below: 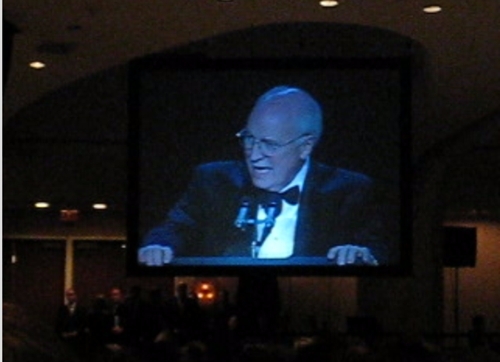 Vice-President Dick Cheney, Environmentalist: "Every time I rush to the hospital, I insist on a hybrid ambulance." 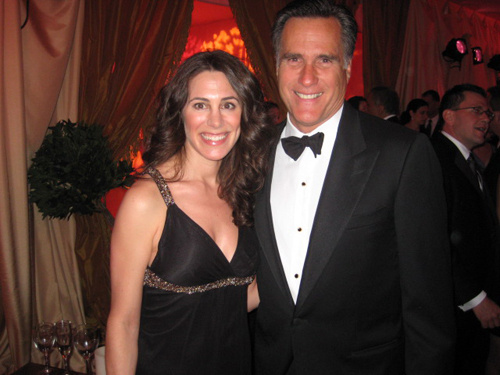 Your ETP editor with Mitt Romney, wearing her finest dress-bling. Mrs. Romney was a little ways away and I told the Governor that she looked beautiful. "She always looks beautiful," he said. Aw. Mi Padre! 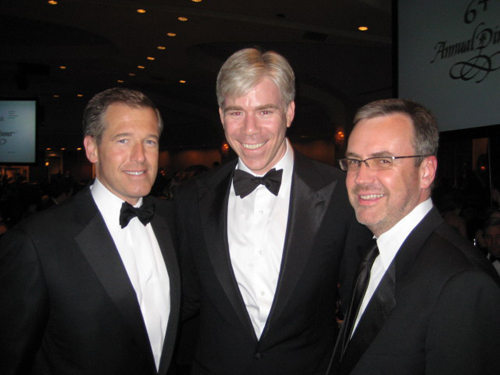 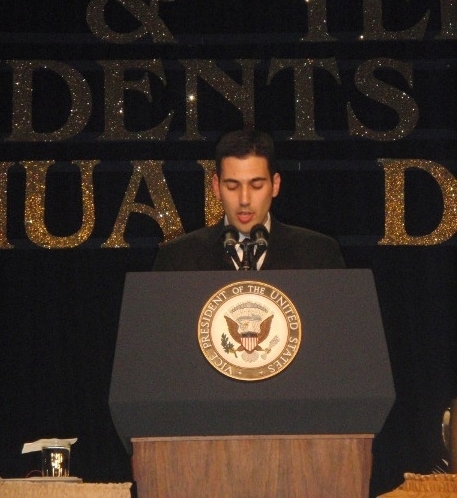 Master of Ceremonies and event chair Steve Chaggaris, Political Director of CBS News, and person about whom I received the following curious email: "Who was the hottie who wuz emcee'ing?" The emailer didn't mean Cheney; he's a Democrat. 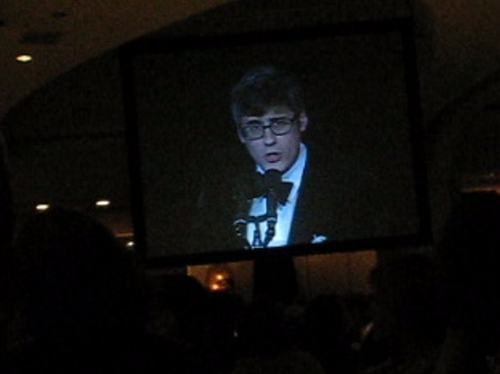 Comedian Mo Rocca: "Will Katie Couric leave CBS News after the inauguration or before? ...You know things are pretty bad when CBS News was listed as one of the charities for Idol Gives Back." 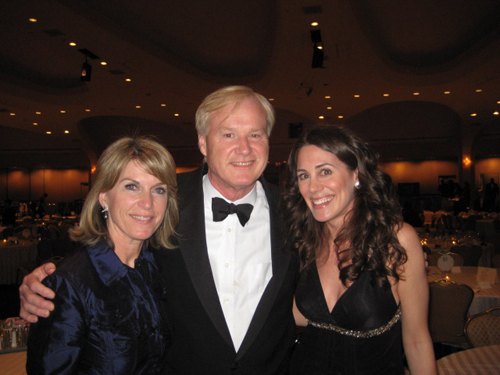 Chris and Kathleen Matthews with your trusty ETP editor. After the party they were planning their next move, and as Kathleen suggested options, Chris told her, "I'm not going anywhere without you!" They were holding hands. Aw again. 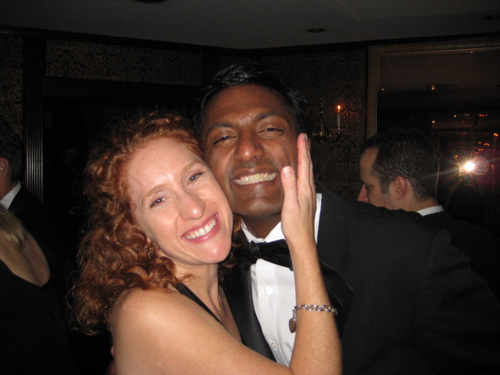 The LAT's Matea Gold and her brother-in-law, Roll Call associate publisher Peter Cherukuri. Aw's all around! 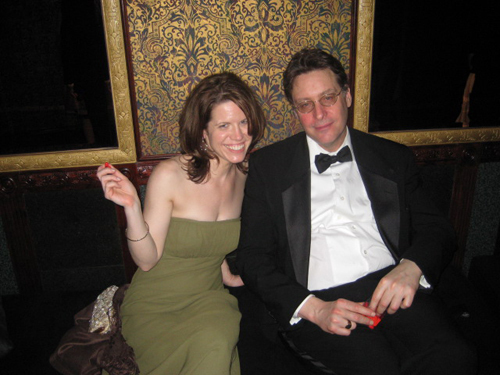 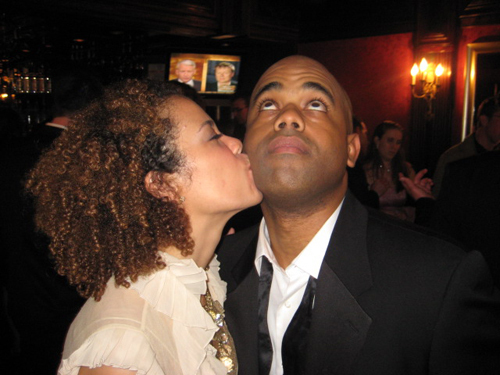 CNN election-night stalwarts Amy Holmes and Jamal Simmons. Holmes said they coulda been the next Matalin & Carville, except "I love Jews!" (Does this mean Wolf Blitzer should be careful when approaching the pundit table? Nope — Holmes is happily dating a nice Jewish boy in Los Angeles. You're safe for now, Blitzer.) 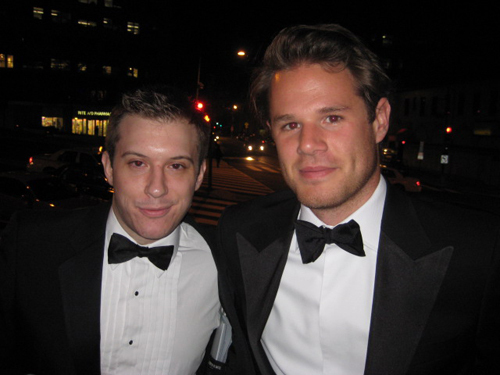 TVNewser's Steve Krakauer and DC Channel 1 anchor Alexander Marquardt, checkin' out the parade outside the CNN after-party (and getting checked out themselves — I mean, check them out!) 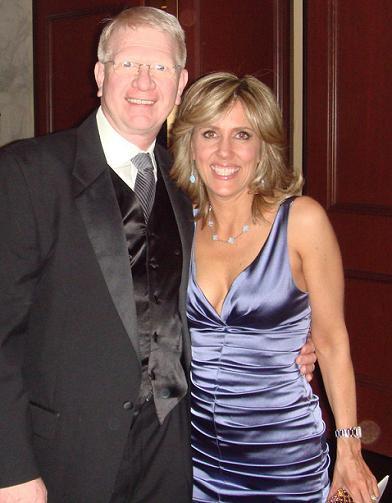 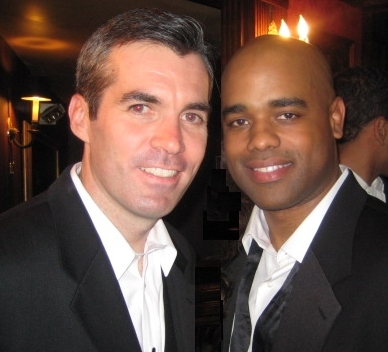 Former Romney spokesman Kevin Madden with fellow pundit Jamal Simmons. It was at this point at the end of the night that the lights kept going off and on. Listen, that's just never a good idea.

Thanks to Dipayan Gupta for assistance with photo upload. And to Mikael Aghal for my dress!