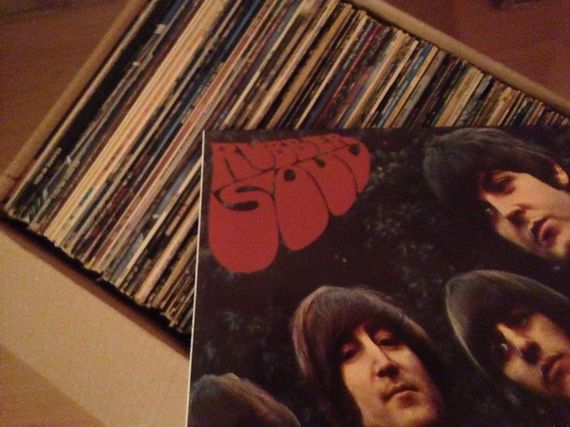 Hard to believe that I bought Rubber Soul fifty years ago when it was released in December of 1965. I still have that album, although it's jacket is a bit worn and tattered. Rubber Soul is one of about a thousand records I have kept over the years. It's a record that I play every year during the holidays. In fact, I'm listening to it right now.

I recently shipped all my records from California where for over a decade they sat waiting for me in my ex-wife's garage. Records are heavy and I couldn't figure out how to ship them cross-country, until I asked my friend at my local used record store. He knew. In what must be a carry over from a time when people bought a lot of books and records, the post office still has a media rate. Which means instead of paying a hundred dollars a box it was only thirty dollars a box to ship thirteen boxes of vinyl cross country.

Most people have gotten rid of their records, but LPs still seem to be a source of fascination for everyone. For me, it's just not the same when you look at a postage stamp sized picture of an album cover on your iPhone. Same thing with your personal photos. it's an experience when you look at a photograph in a frame, see a film in a theater or read a printed book. It's real, especially in a time when everything seems so temporary.

Now, where was I going put all those records? My first thought was upstairs in my office. But then I realized listening to records while I was working wasn't going to work. Records require that you actually pay attention when you're listening, not just zone out and never really hear the music.

The more I thought about it the more I wanted them in my living room, so I could share them with friends. Have an experience where we actually listen to music together. Then I thought wouldn't it be cool to invite people over and ask them to pick out a record they wanted to hear. Tell a story about why they chose that particular recording.

I remember Rubber Soul. It was the record I listened to with my first true love on our first Christmas together in 1965. I was sixteen and my Dad had a showy turquoise blue Pontiac Bonneville with a white convertible top and a hood that went on forever. It had a great FM Radio and lots of room to make out.

When I hear "Norwegian Wood" I'm back there with my girlfriend. That next August we went to see the Beatles at Shea Stadium. I don't think my dad still had that Bonneville, it must have been the green Mustang.

I've bought Rubber Soul three times now. First as an LP, then as a CD and again last week at Barnes and Noble. They had a mono version that I wanted to hear, so I bought it. That's right, Barnes and Noble is selling vinyl in all of their stores. They have about three hundred titles for sale. 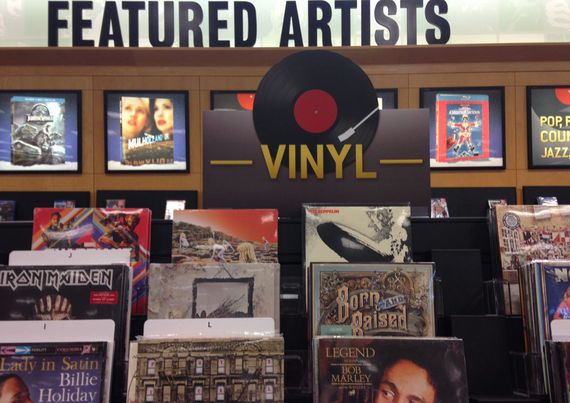 A couple of years ago they closed the one next to my movie theater, now I have nowhere to go after the movie. I realized that if I didn't buy something this little vinyl oasis would disappear.

I'm just like everybody else. I buy a lot of stuff on the internet, but I decided I wouldn't buy everything online, I need someplace to hang.

Who knows, maybe one of your memories is waiting for you in their record department.