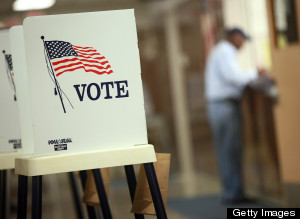 In time for Election Day, syndicated columnist Ruben Navarrette Jr. penned a new op-ed, "Skip the line, Latino voters." He advises Hispanics not to vote in the presidential election. Vote for city council, state representatives, and other down-ballot offices, he urges, but leave the line for president blank. "Skip the line in the name of self-respect," he writes, "because... the lesser of two evils is still evil."

It is astonishing that anyone would take this stance in 2012, let alone one of the nation's most prominent Hispanic journalists. Navarrette's arguments in favor of Latinos not voting are intellectually vacant and morally indefensible. Unfortunately, his column only illustrates the fear that conservatives have of an awakened Hispanic electorate -- as well as his own slide into irrelevance.

Navarrette believes that Latinos should not vote for president because, on immigration, neither candidate is perfect. "The choice is between a challenger who wants illegal immigrants to "self-deport" and an incumbent who has become an expert at forcibly removing them," he writes. In identifying the dilemma, he is correct. But the answer is not for Latino voters to silence themselves. The solution is to choose a candidate whose stance is closest to our own, or whose party we trust, or one with whom we agree on other issues. Our political system may not be perfect, but the only way to effect change is to participate in the process. Anything less is an abdication of civic responsibility.

Navarrette posits that Latinos should not vote for president because "while it sounds like both campaigns have come around to the importance of Latino voters, all they've come up with is better ways to manipulate them." The same could be said of any demographic -- NASCAR Dads, Soccer Moms, Evangelicals. They are all courted by increasingly sophisticated political campaigns. Would Navarrette suggest that they not vote, either? And does he himself plan on not voting for president? Doubtful, on both counts.

Navarrette's opinion would be laughable if this election were not so critical. Regardless of political affiliation, Americans understand that our country is at a crossroads. Latino voters do too, even though we traditionally lag behind other groups in turnout. Yet with Latinos expected to vote in record numbers in this election, it is deeply cynical for Navarrette to attempt to dampen their enthusiasm.

A longtime conservative, Navarrette betrays his true feelings when he laments, "Neither candidate understands us. Not the way George Bush did." He claims that Senate Democrats helped kill immigration reform in 2007, and the DREAM Act in 2010. In fact, Republican obstructionism blocked immigration reform. And the DREAM Act would be law today if a few more Republican Senators had supported it. By maintaining otherwise, Navarrette is simply distorting reality to suit his own views.

Perhaps readers should not expect much from Navarrette. He is a Mexican-American Harvard graduate who is against affirmative action. In 1997, he wrote a Los Angeles Times op-ed supporting an anti-bilingual education bill -- without disclosing that he was a paid media consultant to the gubernatorial candidate sponsoring the bill (For this he earned a 'dart' from the prestigious Columbia Journalism Review). In 2007, he declared that he was "tired" of hearing about the Vietnam War. A staunch defender of Sarah Palin and Alberto Gonzalez, he was recently fired from the San Diego Union-Tribune.

Still, Navarrette is a highly successful writer with a book, awards, and tremendous experience under his belt. For many years, he was largely the only voice for Latinos in opinion journalism. But while his website describes him as a "fresh and increasingly important voice in the national political debate," his efforts lately seem stale and insignificant. He derided The Huffington Post's Latino Voices section as an "online barrio," and devoted a whole column to the less-than-groundbreaking notion that millennials are "entitled." Nowadays, the journalist who once was a leading voice for Hispanics seems rather small.

With his "Skip the line" column, Navarrette has hit a new professional low. He is abusing his position as a syndicated writer with a huge national audience. He is offering advice that he is unlikely to take himself. Navarrette shows he has little respect for Hispanic voters -- and that is as shameful as it is sad.