On Friday afternoon, Marco Rubio's town hall event in Henniker, New Hampshire was my first chance to see him in person. Throughout the event, Rubio subtly differentiated himself from his staff, portraying himself as someone who wants to connect even more with voters, but his campaign is holding him back. It was clearly scripted, but meant to seem natural.

Marco Rubio has impressed me for a while now, albeit only for his politics, not his policies. He is a strong messenger for his ideas and incredibly talented at sidestepping questions to get his talking points across (a skill he has been using often in debates), not to mention young, good looking, and Hispanic. 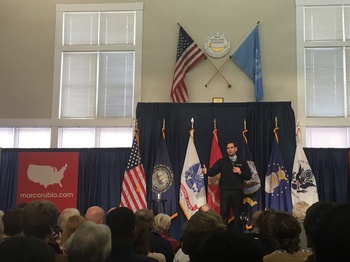 In New Hampshire on Friday, although clearly a bit tired coming out of the previous night's debate, Rubio excelled on the stage, connecting with voters on policy questions and sharing in their day-to-day struggles. He paints a picture of himself as an everyday guy fighting for every average Joe.

Before a staffer got to an audience member to ask the first question of the event, Rubio asked a 13-year-old girl who was sitting with her class in the front row to come up and ask a question. He promptly apologized to the woman who was supposed to ask the first question, explaining how he thought he'd just get started right in front. The girl, Maddie, then asked the senator a potentially planted question, "What are you going to do about the newly formed relationship between Cuba and the U.S.?" Rubio hit a home run with the crowd. Drawing on his Cuban background, he lashed out at Obama for his foreign policy building a case against Cuba referencing both China and Russia. After this response, he moved back to the questioner who the staff had previously picked, and once again apologized profusely.

Later on and nearing the end of time for questions, a staffer shouted "this is the last question" before a middle-aged woman stood up. Rubio interjected, saying that he wanted to take another one after hers -- and then he took two more. The move made him come across like he wanted to stay all day and talk to people.

At one point, Rubio interrupted one woman before she asked her question by inquiring about the New England Patriots hat she was wearing. After mentioning the pain that the hat brought him as a Dolphins fan, he asked the crowd about how Gronkowski was doing and when Brady would finally retire. It was a subtle change of topic and I'm sure that to many in attendance, Rubio appeared to be more interested in football than the policy at hand. He once again apologized to his staff for going off topic and returned to the event-goer's question. Yet, with two simple questions of the audience, he made voters in the room feel that they could run into Rubio at the bar or around town and have the same conversation.

I don't believe that I'll ever run into Rubio at the supermarket nor that he is actually more interested in football than in politics. However, if he can keep this up, then I think he will be moving into 1600 Pennsylvania Avenue next January -- working down the hall from Nikki Haley or John Kasich.