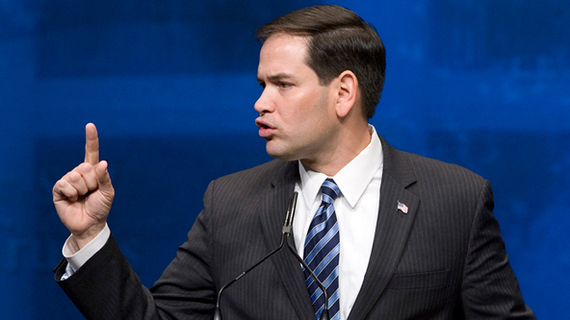 Senator Marco Rubio reaffirmed his opinion that same sex marriage is not protected by the US constitution on one of the Sunday morning political programs. He further stated that marriage is a state's rights issue and therefore the ability of same sex couples to marry should be defined by each state.

Does Rubio actually believe what he is saying? The moderator of the program was unprepared and did not ask the essential follow on question. Based upon Rubio's logic, the Loving vs. Virginia Supreme Court decision would also be the purview of the states. Loving invalidated laws prohibiting interracial marriage across the nation. Is Rubio suggesting that the Loving decision should be overturned? Absolutely.

Rubio in his fervor to discriminate against same sex couples is also railing against interracial marriage. Rubio has suggested that he would appoint Supreme Court justices that would support a strict interpretation of the constitution and support his view of marriage. This is exactly why Rubio is unqualified to be president.

There are only two scenarios, Rubio does not know that his view will overturn the Loving decision, which makes him unqualified to be president because he has not thought through his opinion and its impact. Or worse, Rubio understands that his states' rights view of marriage would overturn the Loving decision and does not care that in his desire to deny marriage equality to same sex couples he would also deny that right to interracial couples. If the latter is true, he is also unqualified to be president. You choose.

The rhetoric coming from Republican presidential candidates this campaign season goes from the uniformed, to the ridiculous, to simply racist. There are plenty of elected moderate Republicans that do not hold these views but none are not running for president.

I implore the mainstream media to ask the follow-on question when elected officials and candidates suggest that marriage is a states' rights issue; whether the person understands that what they are suggesting will overturn the Loving vs. Virginia decision and make interracial marriage illegal. I can't wait to watch those opposed to the same sex marriage ruling squirm because they will never say Loving should be overturned. But based upon the lack of appropriate follow on questions from today's mainstream media, I won't hold my breath.