With Senator Marco Rubio's imminent announcement that he will run for the 2016 Republican Party nomination, at Latino Decisions we take a look at his standing with Latino voters since his rise to national prominence in his 2010 campaign for the U.S. Senate. Based on these trends, we find no evidence that Rubio will draw significant Latino support for his candidacy or for his party more generally.

1. Net Negative with National Latino Electorate. This past November we asked 4,200 Latinos who voted in the 2014 midterm elections whether they had a favorable or unfavorable view of Rubio. Nationally, only 31 percent had a favorable view (12 percent "very favorable", and 19 percent "somewhat favorable") while 36 percent hold an unfavorable opinion of the Senator (22 percent "very unfavorable", and 14 percent "somewhat unfavorable"), a net of -5. Should Rubio become his party's nominee, the campaign would need to engage in substantial Latino-specific outreach as we find that one-third of Latino voters had either never heard of Rubio (13 percent), or had no opinion (20 percent). 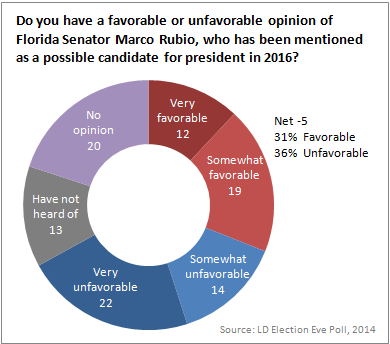 2. Net Negative in Key Latino-influence States, Including Florida. At the state level, the trend is not much different. In competitive states where Latinos comprise a significant share of the active and eligible electorate, Rubio's numbers remain in negative territory. In his home-state of Florida--where Latinos are a critical component to this famously competitive state--Rubio's favorables reach only 39 percent, compared to 42 percent unfavorable; a -3 net result. Similarly, his unfavorable share is just over 40 percent in North Carolina and Nevada--two states where Latino voters have played a decisive role in recent elections. Since nearly half of all Latino voters reside in Texas and California, it is important to consider Latino political behavior in these two states, regardless of the level of party competition. The large number of Latino voters in California and Texas means that Latinos can have an impact on the party primary. Rubio is at a net -11 in California, and flat in Texas (net zero with 31 percent favorable, 31 percent unfavorable). In both states, nearly 40 percent do not know of, or have no opinion of Rubio. 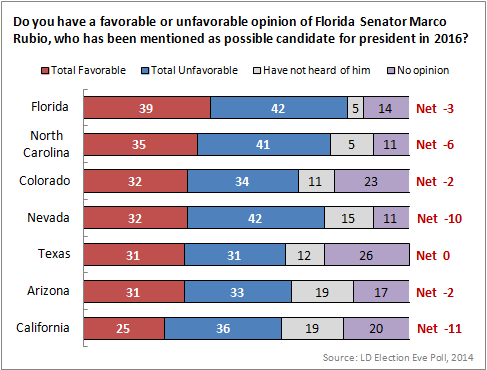 3. Opposition to Immigration Executive Actions. President Obama's executive actions on immigration (both DACA and DAPA, that were the result of years of Congressional inaction), have been met with overwhelming support from Latino voters of all political stripes. Senator Rubio has said it is time to "wind down" the DACA program, saying it was "wrong in the first place" and called DAPA a "horrifying precedent" that violates the constitution.

Senator Rubio's participation in the Senate "Gang of Eight" (that managed to pass a comprehensive immigration bill in the Senate only to see the House refuse to take it up for a vote) does not provide political cover on this issue because: 1) After the bill did not pass, his attention turned to "enforcement first" policy, and 2) his opposition to the temporary relief programs President Obama has advanced is problematic for a large number of Latinos who view immigration as a gateway issue.

Our research shows that Latino support for Rubio was largely contingent upon his immigration positions. If he took a leadership role in advancing comprehensive reform (as he did with the Gang of Eight), 54 percent of Latino voters said they were "likely" to vote for him in the next election (with 21 percent "very likely"). However, if Rubio focused on security/border control priorities (which does not address the status of the 11 million undocumented currently living in the U.S.) Latino support for Rubio dropped to only 29 percent--a substantial difference of 25 points. 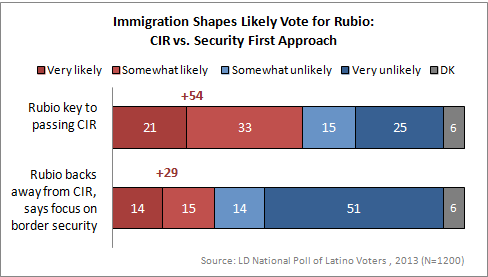 4. Latinos like Obamacare, Rubio Doesn't. The majority of Latino voters supported the Affordable Healthcare Act (Obamacare), while nearly every elected Republican official vehemently opposed it. Rubio, like many in his party, touts his record of voting against the bill and later voting for its repeal. In 2012, our polling found that 61 percent of Latino voters wanted the law to be kept in place, only 25 percent wanted to see Obamacare repealed. Since the law went into effect, the uninsured rate among Latinos has dropped by 12.3 percent, and 4.1 million more Latinos now have health insurance. Support for the policy and associated policy provisions endures. We polled Latino voters in several states that have opted against Medicaid expansion that was made available to the states via the ACA. Over 70 percent of these voters want their states to implement Medicaid expansion; it is not a point of controversy with this electorate. Rubio's consistent record opposing the set of health care programs that fall under the Obamacare umbrella places him squarely against the preferences of most Latino voters in the United States. 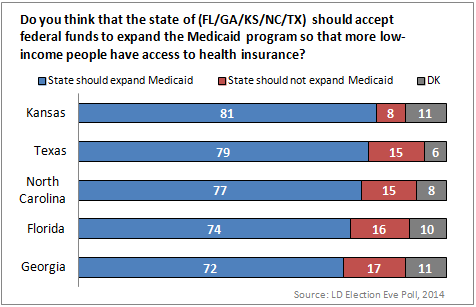 5. Hillary Clinton's Substantial Edge. Comparing Hillary Clinton and Marco Rubio's favorability, there is no contest. Nationally, the gap is very wide where 64 percent of Latino voters view Clinton in a positive light, but only 31 percent have a favorable view of Rubio. She is viewed much more favorably in Latino-influence states as well, including Florida where she is +13 over Rubio. 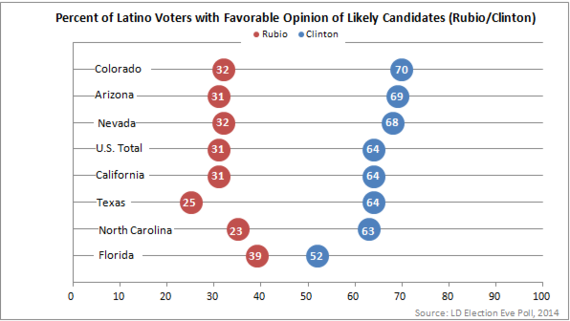 Beyond candidate-centered favorablity estimates, 52 percent of Latino voters indicate they will likely vote for the Democratic candidate in 2016, only 20 percent plan to vote for the Republican nominee. Thus, Clinton is in a very comfortable starting position to build outreach and GOTV efforts with this constituency.

The data are consistent and clear: Senator Rubio is very far from topping 40 percent of the Latino vote that the Republican nominee will need to win in the general election.

Matt A. Barreto is co-founder of the polling and research firm Latino Decisions, professor of Political Science at UCLA and co-author (with Gary Segura) of Latino America: How America's Dynamic Population is Poised to Transform the Politics of the Nation.