Actress and model Ruby Rose has been grabbing headlines since her debut as inmate Stella Carlin on "Orange Is The New Black" season 3. Her character is pretty damn badass -- and it turns out, so is the real person behind it.

Rose has long been vocal about the rigidity of the gender binary and gender roles, especially as they pertain to her own identity as gender fluid. In an interview with Elle, the Australian actress explained what gender fluidity means to her.

"Gender fluidity is not really feeling like you're at one end of the spectrum or the other," she said. "For the most part, I definitely don't identify as any gender. I'm not a guy; I don't really feel like a woman, but obviously I was born one. So, I'm somewhere in the middle, which -- in my perfect imagination -- is like having the best of both sexes. I have a lot of characteristics that would normally be present in a guy and then less that would be present in a woman. But then sometimes I'll put on a skirt -- like today." 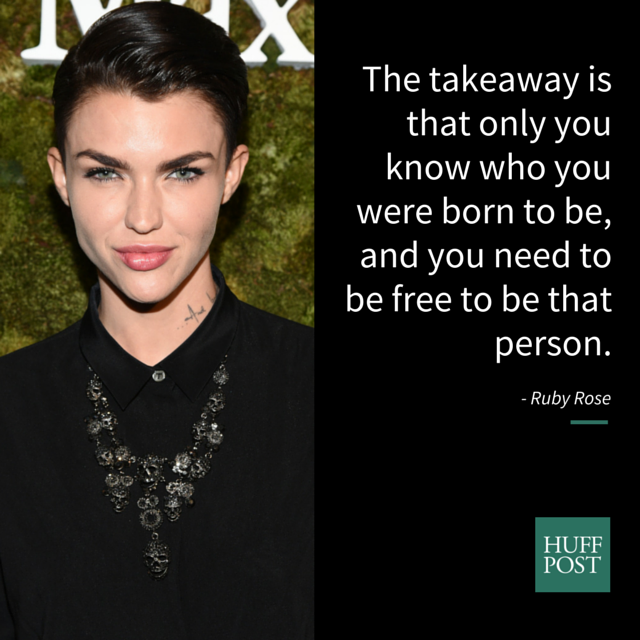 In July 2014, Rose made a video that visually illustrates how freeing it is to break down socially-prescribed gender roles, and "what it is like to have an identity that deviates from the status quo." (Watch it above.)

Ultimately, Rose just wants people to feel empowered to define their own identities, and live their lives in a way that feels authentic. "The takeaway is that only you know who you were born to be," she told Elle, "and you need to be free to be that person."

Visibility is power, y'all. Get it, Ruby.