Excerpted from You Can Be Right (Or You Can Be Married): Looking for Love in the Age of Divorce. Copyright © 2012 Dana Adam Shapiro. Excerpted with permission by Scribner, a Division of Simon & Schuster, Inc.

NAME (or alias): Ruby
OCCUPATION: Real Estate
YEAR OF BIRTH: 1976
CURRENT MARRIAGE STATUS: Divorced
DO YOU HAVE ANY CHILDREN? Nope
TOWN WHERE YOU GREW UP: Alabama
TOWN WHERE YOU LIVE: New York
YEAR OF MARRIAGE: 1999
HOW LONG YOU DATED BEFORE YOU WERE MARRIED: Four years
YEAR OF DIVORCE: 2009

Seth and I met when I was nineteen and he was twenty. I believe it was in a German theology class. Nothing turns me on like a man with a really thick brain, and I thought he was one of the smartest people I'd ever met. We didn't get together in college, but we were friendly. After college, he was at Columbia for grad school and I was at NYU and we started hanging out. I remember having Chinese food on his roof one night and it just suddenly felt magical. It was like walking into a movie and here was my "happily ever after." It was overwhelming.

Of course, hindsight's 20/20 so now I can see all the issues that we had. I'm trying to think of a non-judgmental way to say this... I'm not a person with a lot of boundaries -- I'm very interested in emotional intimacy and messiness. I like close quarters in that regard. So while at first Seth found that charming, I think ultimately he started to find it overwhelming. He is somebody with a lot of boundaries. He just really likes to be by himself. He has, like, two close friends. I mean, this is a stupid example, but on Facebook, I had like 800 friends and he had 23. On Flickr, he's the guy who has photographs of his cat and his new bed. That's what he's sharing with the world.

So during our marriage, when we were invited places or over for dinner parties, I would always go by myself. I just figured, "Okay, different strokes for different folks. It's not his thing, I'm not going to force him." I had made the mistake of trying to make him go to things when he didn't want to and that didn't make anybody happy. He was miserable the whole time and then I couldn't enjoy myself because I was so focused on how unhappy and hostile he was to everybody.

When we turned 30 -- or when I turned 30 -- I started to get really obsessive about the kid thing. It was like, "Okay, maybe not now, but when in the next two years are we going to try to get pregnant?" To his credit, he was very clear about all this. He kept saying, "I really don't know if I want to have kids." And I was like, "Of course you want to have kids! Who doesn't want to have kids?" I really just refused to hear him. And I guess that's what ultimately broke us up.

I think there's this popular misconception about sex in a marriage: that you get bored, or that it's the same type of thing over and over again. And that can set in, sure. But when things were good between us, the fact that we were married actually made things more intense. Because you're so completely at ease with the other person, you know you're so loved by them, and that can be amazing. But sex is the ultimate form of communication and when that communication breaks down it becomes very hard to want the other person in any serious way. And because I wanted a child so badly, sex became loaded in that regard. The first year we were together, Seth and I must've had sex five or six times a week. By the last year of our marriage, we maybe had sex five or six times that year.

I suppose in some weird, judgmental way, I always thought that affairs were symptoms of moral character. And now I see them for what they are. It is a crying out of feeling totally alone within your own marriage -- sexual isolation or emotional isolation -- which is the scariest feeling because there's no recourse. When you're single, there's a possibility that you're going to fall in love. You might be lonely, but you dwell in that type of possibility. When you're married and things are shitty there's nowhere to go. So you really start to resent the person. And there were moments when things got really bad between Seth and me. I remember being in bed and him touching me and me thinking: "You've gotta be fucking kidding me. All you do is make me feel like shit and then you want to get laid? What are you crazy?"

So we got into our own little vicious cycle. The more I needed him, the more withdrawn he became, and the more susceptible I became to the attention of other men. I had what I call a number of "emotional affairs." At one point I was pretty convinced that I was in love with one of these guys. I had gone to a conference and this person had been there and I ended up sleeping with him in the same bed, spooning, lying in his arms all night. I had written all about it in my journal and left it out. I mean, it's so obvious I wanted to get caught. And of course Seth ended up reading it, which led to a complete blowout.

My stepmom had all these great lines about marriage that I thought were completely ludicrous when I first heard them, but the longer I was married, I felt they were really right-on. One was: "You can be right or you can be married." Or: "Marriage isn't a 50/50 compromise -- it's a hundred percent compromise. Neither person totally gets what they want."

I'm sorry if that sounds cynical but people who think that love conquers all, I just wonder if they've ever been married. Ninety percent of the secret to being married is the commitment to the process of being married. Whatever comes your way -- problems with sex, problems with money, whatever -- it's essential that you're both committed to working out a solution where both people are represented, where the well-being of the other person is just as -- if not more important -- than your own. It's an easy thing to say ideologically, but it's really, really hard to do, especially the younger you are.

The question is: Do you come to a point where you compromise yourself into oblivion, where you just cease to exist? I think that is the real danger about staying in a bad relationship. And I remember definitely thinking that. Like if I had just given up on the child thing and it was okay to go everywhere by myself and essentially be isolated within my own marriage, I'd probably still be married. If I had tried a little harder, if I had done a little better, if I had not been so demanding, if I had been more understanding, maybe it could have worked. I think part of me is still haunted by that idea. And there are people who do make those choices. But I just think I would've woken up at 40, homicidal and ready to kill him. We would've been one of those couples who were married for fifty years and hated the sight of each other. And that is really easy to let happen -- incredibly easy.

Emotionally, it's just devastating to suddenly be single, especially if you've been married your whole adult life. It's shocking. It's like this seismic shift that people don't warn you about. In popular culture, it's depicted as this great liberation, but it sure as hell doesn't feel that way.

When you're married, your frame of reference for a relationship is, you know, let's go to Target, we'll run some errands, clean up the garage, then maybe in the afternoon we'll take a nap and have sex, and then we're seeing the So-and-so's for dinner. You know that there's no hiding your complexity from the other person or the other person hiding their complexity from you. Eventually all your shit comes out and it comes out in full force, so you might as well stop pretending sooner rather than later.

When you're dating, it feels like you're involved in this elaborate public relations event where, as Chris Rock says, the ambassador of you is meeting the ambassador of them, and suddenly you're getting dressed up and receiving a beautiful bouquet of flowers, getting taken out for a three hundred dollar dinner and having a bottle of wine on a Thursday night. And you're just like, "What the hell is this?" You feel like Alice in Wonderland. It's not that it's not fun; it's just not real. It's substance-less. Personally, I prefer Target.

You Can Be Right (Or You Can Be Married): Looking for Love in the Age of Divorce hits shelves September 4. 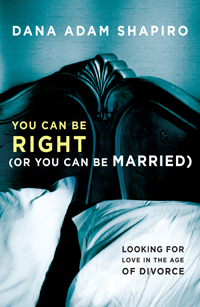