The language is racial, insofar as it suggests a fundamental difference in identity between Obama and the rest of us. Giuliani is alleging that an unfathomable separation marks Obama: he's not like the us, indeed "he doesn't love you. And he doesn't love me." Nor, Giuliani insists, does he believe "the president loves America."

Why is Obama like this? Giuliani explains it's because "he wasn't brought up the way you were brought up and I was brought up."

These sort of claims about unbridgeable differences between us and some threatening "other," differences rooted in upbringing, stir undercurrents of racial anxiety. They inevitably resonate for a significant number of whites with the sense -- sometimes consciously but more often unconsciously held -- that blacks are inherently different, unfamiliar and even hostile. 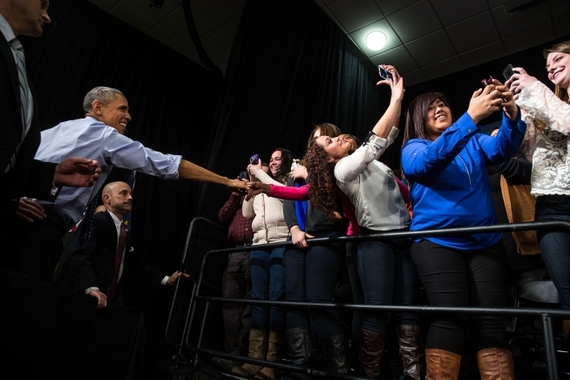 And yet, this is a coded racial appeal, one structured to allow denial that it has anything to do with race at all. Thus, Giuliani's insistence that talking about Obama's upbringing can't be about race "since he was brought up by a white mother, a white grandfather, went to white schools, and most of this he learned from white people."

On one level, this seeks to deflect the charge of racism by suggesting that impugning Obama's upbringing raises questions about whites, not blacks. The charge that somehow there's any racism here becomes, as Giuliani insists, "a joke."

On another level, though, the dog whistling continues even in the defense. Among conservatives, Obama has been consistently criticized for identifying as black, even though his mother is white and he was close to his white grandparents. Highlighting the role of whites in raising Obama contrasts with the reality that he is widely recognized as, and holds himself out to be, a black president -- and this, in turn, accentuates for some a sense of racial betrayal and supposed anti-white hostility.

This double move, denying any racial intent but then blowing another dog whistle, is evident again when Giuliani proclaims: "This isn't racism. This is socialism or possibly anti-colonialism."

The racial aspects of the anti-colonial charge are fairly obvious, since they serve to connect Obama to his father's home in Kenya and thus Africa. The charge that he's a socialist is doing something similar. On it's face, the claim that Obama's a socialist is absurd; indeed, in many policy particulars he's careful to track positions previously taken by Republicans, to the chagrin of many progressives.

But in contemporary political discourse, to say someone is a socialist -- just as to say that someone doesn't love America -- is not to make a claim of any substance, but instead it's to imply that they are fundamentally different, dangerously strange and inexplicably hostile toward the rest of us. This insinuation of dangerous and fixed difference, when imputed to an African American, triggers racial anxiety even when race is not expressly mentioned. It is, in another words, just another Giuliani dog whistle.