Rudy the staghound gets to enjoy a lot of the things that many pets do: trips to the beach, playtime at the dog park, napping on the couch.

But Rudy's adventures and home life are examined a lot more closely than those of an ordinary pet, because he's being raised with science.

That's how Australian canine researcher Mia Cobb puts it on a blog, charmingly called "Do You Believe In Dog?", that she co-writes with fellow canine scientist Julie Hecht.

"It means we're putting all that we know about what dogs need to live a healthy, happy and engaging life into practice," Cobb explains. "From using learning theory in how we train him, to what we know about how to familiarize young dogs with loud noises, how to enjoy visiting new places, what rewards are most effective to get the behavior we want, how to be comfortable being alone if we're not home, socializing him with other dogs, how to interact safely with adults and children -- there's been scientific research in all these areas and many more.

"We're trying to put all that knowledge into setting Rudy up to have an awesome life."

Raising a dog with science looks a lot like raising a well-trained dog. Cobb says the difference is that she's basing her "Raising Rudy" choices on studies and peer-reviewed findings which are often published behind paywalls and other places that trainers and regular, non-Ph.D. dog owners can't see them.

A recent trip to the shore with Rudy involved more than a swim and sandy play time. There was also an opportunity to think carefully about how to introduce Rudy to new stimuli and reinforce good recall and obedience. There were a few "oops" moments, too -- like when Rudy ate a dead crab while off-leash. But even that fit in with Cobb's scientific method.

"It highlighted to me where I need to do more training practice, or to keep him on lead in highly exciting new environments where he's less likely to respond to things we say. Like the field of science, it's an ongoing process," she says. "It's OK to not have all the answers."

Cobb, who lives outside Melbourne with her family and is finishing her Ph.D. at Monash University, spoke with HuffPost via email about raising Rudy.

The Huffington Post: What are you hoping to gain by raising Rudy like this? Do you have a paper in mind? Or just a very well-behaved, well-adjusted dog?

Rudy's not a science experiment in that way! There's no plan to document his development formally.

But I do want to share his progress with people who might be interested in how we apply scientific knowledge on a day-to-day basis. Sometimes there's a disconnect between what researchers do and how it can be implemented, I hope the "Raising Rudy" project will show people how they can use science with their dogs any time and also shed some light on the excellent scientific research being produced by my colleagues around the world.

Most of the time, researchers are driven in science by questions we want to know the answers to. Often with canine research, we're trying to better understand our relationship with dogs and how to optimize that relationship for both dogs and people.

One theme that's becoming more apparent is that, like us, all dogs are individuals. I look forward to learning more about the best strategies we can apply in real life situations to cater to this diversity, in helping our canine friends and having them help us.

Can you give specific examples of the science you're using?

[We] tested if he is left- or right-pawed. This is also known as paw-preference or laterality testing, and research has shown laterality can be linked to a range of behaviors. Consequently, it is being used more widely by working dog organizations as part of their testing of new recruits. (Scientific references about laterality can be found at the bottom of this blog post, and at the Journal of Veterinary Behavior, Behavioural Processes, PsycNet, and the International Journal of Neuroscience.)

For the record, Rudy uses both paws, but does seem to demonstrate a left-paw bias (common in male dogs). This probably means we shouldn't enroll him in Guide Dog school!

[We] checked his preference for positive reinforcement. Research has shown that dogs tend to prefer food, then petting, then verbal praise and human company (see: Behavioural Processes and the Journal of the Experimental Analysis of Behavior). [It also shows] that dogs can learn good or bad behaviors from observing each other (see: Applied Animal Behaviour Science and Developmental Psychobiology), so there is great value in having an older 'model' dog to demonstrate good behaviors to a new or young dog. Rudy loves play with a tug toy and food as first choice reinforcers, and we're fortunate to have a very experienced friend with an exemplary Doberman dog named Kade with whom we catch up with regularly. Kade acts in part almost like a guiding chaperone for Rudy on lovely off leash walk adventures, helping us set Rudy up for successful situations (like returning when called) that we can reinforce positively.

Nice calm hello to this young'un today. So grateful to people willing to let him sniff! #RaisingRudy #socialisation pic.twitter.com/9jJ31QTxX1


Tell me about Rudy! How did you choose him as the dog who would be raised with science?

He was picked up as a stray puppy at 16 weeks of age and taken to a shelter in a regional area of our state. We drove a 400-mile round trip to meet him (5 hours each way!) at the shelter in the week before Christmas and decided he was a great fit for our family.

He was very bouncy and mouthy -- as puppies are -- at the beginning, but he's learning very quickly that sitting quietly gets lots of attention and rewards!

I think any dog that came to live with us would be "raised with science," but as the first puppy in our home in 14 years, I see raising Rudy as an opportunity to apply all that I've learned about dogs to him, like a diet of science!

How's it going with Rudy so far?

I'm so impressed with him! He's adjusted so well to life in our home. He's toilet trained, he's sitting quietly when he wants attention, he's able to be outside on his own happily, he walks beautifully on lead, he loves playing with toys and he's responsive to training.

We've just gone through a busy period of teething and this week he's started being a little more wary of new places, sounds and things (which is an age-typical phase that occurs around 6 months of age, but passes), so we're adjusting what we do and expect of him accordingly. He's still doing a fair bit of sleeping and growing too, because he's large it's easy to overlook he's just 5 months old. 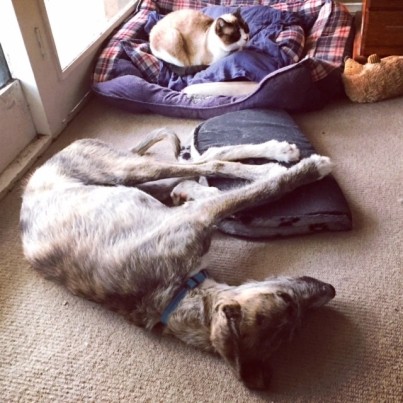 What are the best things that you've done with Rudy so far? Have there been any challenges?

I think the most fun thing so far has been watching Rudy grow more confident. He has a lovely gentle and laid-back personality, so all we're doing is guiding him to behave in ways that are good for him. For example, sitting quietly when we meet someone new rather than giving in to those puppy tendencies to jump and mouth means he gets attention and food rewards. Seeing him automatically sit calmly when someone new approaches because he knows that the outcome will be positive is delightful.

The biggest challenge has probably been in helping our 4-year-old regain her dog mojo. We had eight months without a dog in the household after our two old dogs died six months apart. So she had to regain some confidence with a big pup in the home, which she definitely has.

What is a typical day like for a canine scientist? I imagine that you play with a lot of dogs, and then ... well, I don't know what comes after that. But I'd love to find out.

Ha! Hanging out with dogs is definitely a perk or researching them! Right now, because I'm finishing up my PhD, I actually do a lot of sitting at my laptop and writing up my research findings.

Walking Rudy before I settle down to the computer in the morning has been a great addition to my daily routine. Some days, I visit working dog facilities and meet dogs and their handlers and learn about their work. Other times I'm catching up on the latest science findings from around the world, so lots of reading.

There's actually a new special edition of the journal Behavioural Processes that is open access throughout 2015, so anyone can go and check out some new research relating to dogs.

What are the biggest misconceptions about dogs that, as a canine scientist, you'd want to clear up?

A lot of people tend to assume their dog will like something because they do, rather than stopping to consider things from the canine perspective. This is called anthropomorphism, where people attribute human-like qualities to non-humans.

I'd encourage people to really think about what dogs want or like independently of their own preferences. If in doubt, give your dog a choice. A lot of people -- on Twitter anyway! -- want science to enable dogs to talk to people. But we need to realize that dogs ARE communicating with us every day through their behavior, we just need to pay attention.

Do dogs like wearing princess outfits or going sky diving? Maybe some do, but if we remove the element of choice, we're potentially compromising their welfare.

One other thing I thought of that many dog owners and even some trainers mistake is the capacity for their dogs to demonstrate "guilty behavior." The scenario where the owner returns to a destroyed cushion or dug up garden bed and report the dog "looked guilty?" Scientific enquiry has demonstrated that dogs are not feeling guilty in the way that people tend to think, but instead, responding to the human behavior based on past experiences. (See: Behavioural Processes, Applied Animal Behaviour Science, Domestic Dog Cognition and Behavior, and Behavioural Processes.)

"Experiencing new substrates underfoot in a fun way, playing retrieve with toys on this slippery cardboard," says Cobb -- who threw squeaky toys onto cardboard so Rudy would learn to associate the sensation of walking on slippery sensations with a good time.

This interview has been edited for length, and Australian spellings have been converted into American English.

Keep tabs on Rudy and his science on the Do You Believe In Dog? blog, Facebook page and using the hashtag #RaisingRudy on Twitter.