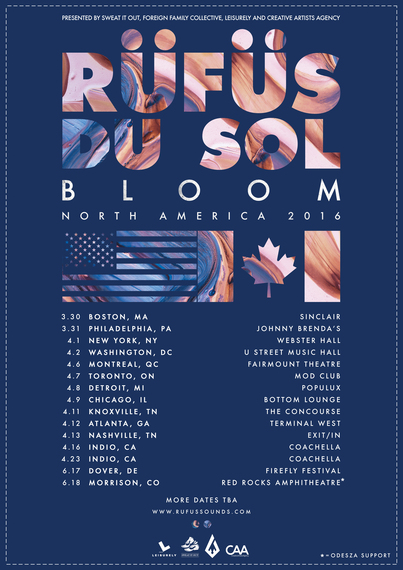 Australian live electronic trio, Rüfüs Du Sol, recently announced their upcoming 11-date, American spring tour which kicks off in Boston on March 30th. The excursion is named after their newest album Bloom which was released on January 22nd through ODESZA's Foreign Family Collective and is now available for listening on Spotify. The stream includes seven new, full-length tracks as well as four previously released tracks. Jon George, Tyrone Lindqvist and James Hunt have been sharing their groovy beats and kinetic soundscapes with fans for years and are only growing in popularity.

The tour will include stops at Coachella, Firefly and will be concluding at the legendary Red Rocks amphitheater in Colorado with ODESZA. Full of their sonic prowess, Bloom is as catchy as it is soulful and as thoughtful as it is upbeat. The harmonic connection between keyboardist George, vocalist/guitarist Lindqvist, and drummer Hunt is apparent in their mastery on Bloom as well as their musicianship on stage. Proud to share this album with their large American fan base, James Hunt describes his excitement sound about this upcoming tour:

People seem to be embracing our music now more than ever, I guess that's the impression we are getting from social media stuff. It's one of those things that you can't really quantify how far your music reaches around the world. We are hitting a lot of new places this time in North America. It's pretty surreal to be playing at Coachella and also the Red Rocks show with Odesza. We have two months of solid touring to do before we get to Coachella, so that show is really going to be a bit of a reward for us.

This year promises to be a pivotal time for the trio as they have truly honed in on their craft and achieved a signature sound. Though they are no strangers to live performance, every tour poses different challenges, new perspectives, and unique locales which they will gratefully accept. "When we approach the live show I think a really exciting thing for us is to try to bring a new dimension and new journey to our music," explains Hunt. "A big part of what we do whether it be writing a record or performing it live, is that sense of progression and that sense of tension and release, we're working on the live arrangements for the songs from Bloom right now. We think about what we'd want to hear if we were out there having a dance."

Check out my previous interview with Jon George HERE