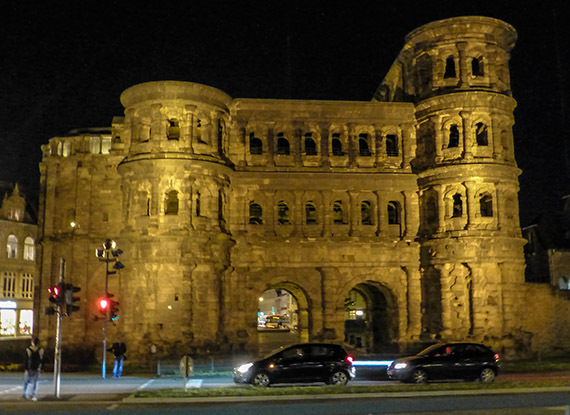 TRIER, Germany -- Arriving in Trier on a dark and moonless night, was never part of my plan. I rushed through the train station, misplaced my carry-on luggage, found it after a frantic search then missed the express train to Trier. I should have slowed down, ordered a bratwurst in one of the station's cafes then moseyed on down to the platform and taken the next train out. 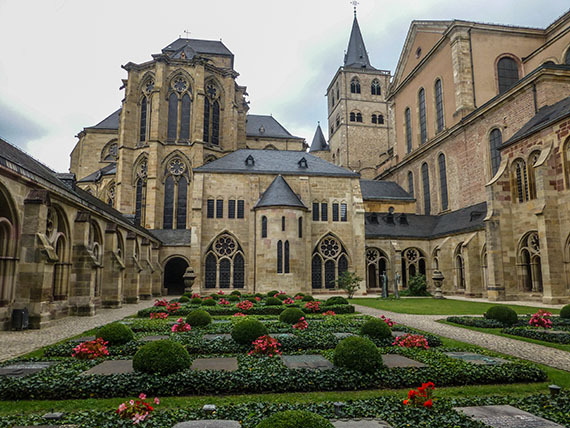 What I mean is, you don't have to make the same mistake. Plan to arrive at dusk and you'll be treated to a light show, the moment when the spots illuminating Trier's Roman ruins blink on, bringing them to life. If you've done your homework in advance you won't think you've seen the ghost of Nero, as I did, when the Porta Nigra, the Roman gate to the city, built in the first century A.D., loomed up in the dark. Trier's best preserved ruin, the Porta Nigra looked so new that I almost expected to see armed centurions marching underneath. Made of massive sandstone blocks, it was easy to see why the 98-foot-high pile lasted into the 21rst century, long enough to be declared a UNESCO World Heritage Site, one of Trier's nine such sites.

It was early when I returned the next morning, but the tour groups were already there, milling around in front of the Tourism Office, sipping take-out coffee, perusing brochures and waiting for their guides. While they snapped pictures, I stopped at the office to get a city map and to ask about local restaurants and available city tours. 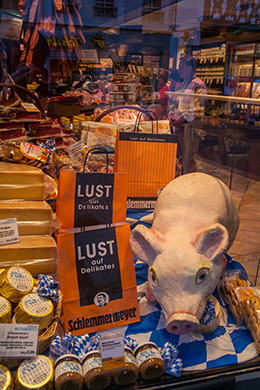 "We've got something for every age," said the desk clerk, looking me up and down to assess my age. The most popular tours, she said, were the afternoon trips to the vineyards and wineries along the Moselle River. Not surprising, I thought, since Moselle wines are among Europe's best. Some tours go by bus, she said, or I could take a river boat. In the meantime, she offered alternatives: the Roman Ruins tour led by a centurion in a breast plate and helmet.Or if I fancied wearing a sheet, the Toga Tour of Roman Trier, with guide and visitors dressed like ghosts. 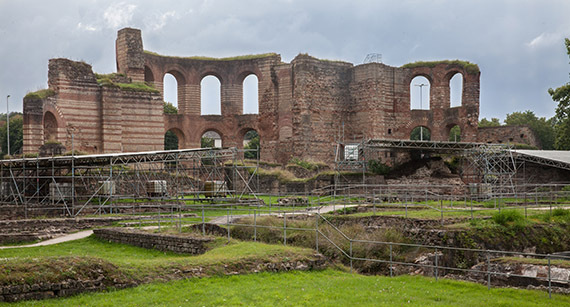 Then there was the gladiator-led adventure to the Amphitheater, a chance for kids with a taste for gore to get their jollies. Bt My dark favorite had to be the "Devil in Trier," promising a spooky immersion in the Middle Age's grimmest, most oppressive years. These were the centuries when free thinkers were burned at the stake and the town's Jewish community was chained in at night. "Beware of witchcraft!" said the clerk, smiling, handing over a ticket. Joining the crowd of enthusiastic witches and warlocks, we walked through the old town streets, learning about the ignorance and superstition that kept Trier's beleaguered citizens in line for a couple of hundred years, at least until the Renaissance opened their eyes and enlightenment followed. 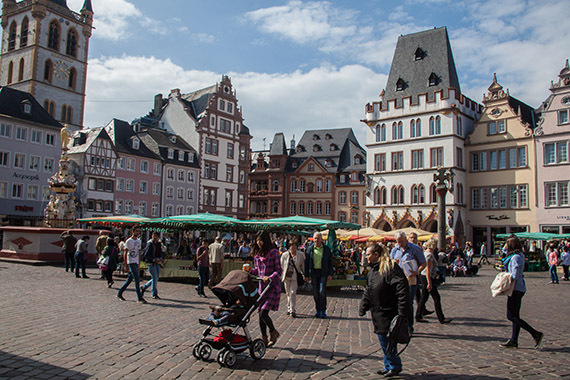 After another hour exploring Trier's historic center, I ran into the same Chinese tourist group I'd seen exploring the Roman baths and peering at the statuary in the Romanesque cathedral. Walking right by me, they made a break for the modest three-story pink house I'd missed, a house with a "Euroshop" (a 99-cent store) on the ground floor, and a historic marker on the wall. "What's the attraction?" I asked our guide, Elke Schmeier. 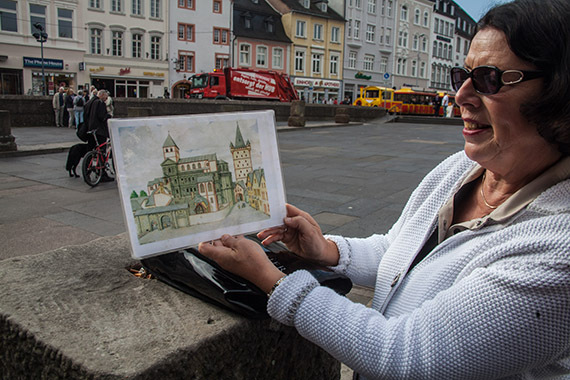 "They want to see where Karl Marx grew up," she said. "This house here and the Marx museum down the street are the first thing Chinese tourists ask about," she said. "They're surprised when they hear that Marx came from a middle-class family." 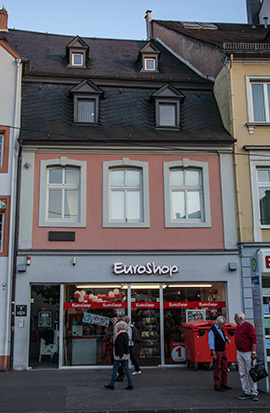 And so it went on my first day in Trier, where a high-speed flight through 2,000 years of history was crammed into ten enlightening hours. More was to come over my next week in the Rhineland, but as dusk settled over Trier, it was to buzz into the closest restaurant on hand, the quick-serve joint on the corner of the 10th century Market Square -- you guessed it -- McDonald's.