Access to justice is a core American value. But a new survey of the rule of law across the globe finds that the U.S. ranks surprisingly low relative to its high-income peers in terms of access to legal counsel in civil disputes and equal protection under criminal law.

The "Rule of Law Index," released Wednesday by the independent World Justice Project, found that in some categories the U.S. even ranks below some developing nations, such as Botswana and Georgia.

In an interview with The Huffington Post, the survey's authors said the problems in the U.S. are primarily due to unequal access to justice based on race and class.

"In the U.S., socioeconomic level matters," said Alejandro Ponce, chief research officer for the World Justice Project. "Poor people are at a disadvantage in all these situations, as are ethnic minorities."

In the category of criminal justice, the U.S. ranked 26th among 97 countries, and in the bottom 20 percent of wealthy nations -- dragged down by low scores in the subcategory of equal protection.

In the civil justice category, the U.S. got dinged because it lags behind in providing access to disadvantaged groups, the survey found. "Legal assistance is frequently expensive or unavailable, and the gap between rich and poor individuals in terms of both actual use of and satisfaction with the civil court system is significant. In addition, there is a perception that ethnic minorities and foreigners receive unequal treatment."

The survey illustrated the problem by comparing civil law practices in the U.S. with those in Finland, which ranked among the top five countries. "When facing a common civil dispute (in this case, an unpaid debt), most people in Finland, regardless of their socio-economic status, tend to use formal dispute-resolution channels, while only a few choose to take no action. The situation is quite different in the United States. While high income Americans behave similarly to the Finnish, low-income people act very differently—only a few use the court system (including small-claims courts), while many take no action to resolve their disputes."

One obvious difference: In many countries, legal services are much more widely available, and subsidized, for low income people. 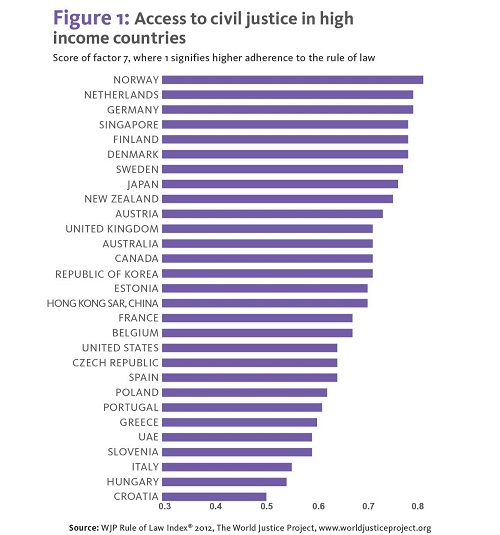 In the years since the housing crisis began, this dynamic has had special resonance in the U.S., as relatively few homeowners have found satisfaction in using the legal system againt the banks that lured them into loans they couldn’t afford.

The U.S.'s highest ranking, in the category of open government, still placed it only 13th out of 97 countries worldwide. "The U.S. lags behind most of the Western European countries in all dimensions," Ponce said.

This is the third annual index by the World Justice Project, and since the first one came out in 2010, the U.S. rankings have remained weak.

"It remains very significant and the problem is that we do not see that government efforts or private efforts are making any dent in the problem," said Juan Botero, the project's executive director.

"We were very hopeful when the Obama administration launched the Access to Justice Initiative -- but we do not see any improvement yet," he said.

The survey's authors said they still see police discrimination against minorities in many countries. Nations in the Middle East still struggle with fundamental rights -- though there has been significant improvement in Morocco and Tunisia.

China continues to rank very poorly on issues including freedom of speech and assembly, government accountability and corruption. The five countries that ranked worse on fundamental rights were Pakistan, China, Uzbekistan, Zimbabwe and Iran.

Rule of Law index: U.S. Ranks Low In Access To Justice Compared To Other Wealthy Nations
Most Iconic Photos Of Obama&#039;s First Term