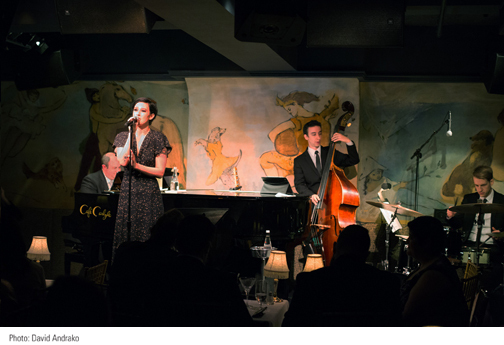 Rumer Willis, eldest daughter of Demi Moore and Bruce Willis may have her own take on love. At 28, she's a headliner at the famed Café Carlyle with a jazzy, pop show that looks at love from many angles. Covering Doris Day's "Perhaps," she imagines a new honesty in the cha-cha beat. For Buddy Johnson's "Since I Fell for You," she croons, and goes softer where Liza Minelli belts Kander & Ebb's "Maybe This Time." Bringing her life partner and music director Tye Blue to the stage--"We have a lot in common. We both like boys"--she sings "Class" from Chicago; this number made me wish I had seen her as Roxie last year.

At this coveted Carlyle gig, Rumer Willis is backed by an excellent band: Danny Weller on bass, Dan Berkery on drums, performing Christopher Lloyd Bratten's arrangements -- but James Sampliner's piano riff on Fiona Apple's "Criminal" simply put her in ecstatic mode. Other pleasures of her set included Amy Winehouse's "You Know I'm No Good," and some unfamiliar tunes that I'd love to hear again: Maria McKee's "If Love is a Red Dress (Hang Me in Rags)," and "Age" from a British folk and soul singer songwriter, Lianne Las Havas. Willis considers "God Bless the Child" the story of her life, inspired by her dad's playing Billie Holiday for her. She has only a few nights left to her Carlyle residency, so catch her immediately, and don't let her leave the stage without her encore, "The Story (I Was Made For You)."