Rumi: The Big Red Book collects all the work that I have done on The Shams (Rumi's Divani Shamsi Tabriz, The Works of Shams Tabriz) over the last 34 years. As I put this book together, I felt drawn to revise slightly almost every poem, to relineate and reword. So I hope this is a refreshed collection.

I sent a copy to my friend, Robert Bly. He describes in a letter what I have done with these poems: "You have given them pats on the shirt, set them on some local horse, and given the horse a clap on the rear, and the poems are gone, well almost gone." He should know. He got me started on this path, when in June of 1976, he handed me a copy of Arberry's translation of Rumi and said, "These poems need to be released from their cages," by which he meant they needed to be translated out of their scholarly idiom into the lively American free verse tradition of Whitman. Hence this book. It is not all that I have done the last three decades, but I did spend some time, almost every day, with Rumi's poetry. I do not regret it. Something about the practice keeps unfolding.

The organization of this book is unique. The odes (ghazals) are divided into 27 sections, each a Name for the Mystery. I avoid, wherever I can, using the word God. It feels so freighted, to me, with doctrine and division and violence. I don't necessarily recommend this avoidance to anyone else. Eighteen of the Names are taken from my teacher, Bawa Muhaiyaddeen's The 99 Beautiful Names of Allah (The Opener, The Gatherer, The Patient, The Kind, The Intricate, Majesty, Light, Peace, The Grateful, The Living, etc). Two of the Names for Mystery are people I have been fortunate enough to meet, Bawa Muhaiyaddeen and Osho. Two other Names are also human beings, the Indian saint, Ramana Maharshi, and Shams Tabriz. Three other Names are borrowed. Dissolving the Concept of "God" (I have heard this somewhere, but I don't remember where), Playing (Plotinus), Tenderness Toward Existence (Galway Kinnell's phrase) and then there's the next to last, Everything and Everyone Else. The last Name is one that is implied in every Sufi list of the 99 Names, The Name That Cannot Be Spoken or Written.

The quatrains are more playfully, less thematically, divided. As I say in the Organizational Note (p. 364), the expanse of Emily Dickinson's 1789 short, title-less poems in the Harvard edition is dismaying to the eye. So in order to give some pattern to this array of Rumi's short poems, and some spaciousness too, I set them in 27 sections, 25 under the aegis of a constellation (Taurus, Leo, Pegasus, Orion, Pisces, etc.), and two under the name of another celestial body: the Milky Way (our home galaxy seen from the side) and the Black Hole at the center of it, which I have presumptuously named. Somebody had to. Bijou. It is that maelstrom that gives our galaxy its spiraling, dervishly outflung arms. The strange devices above the headnotes for each section are 10th Century drawings of the constellations from al-Sufi's (903-986) The Book of Fixed Stars. That is the fairly esoteric layout of the book. The wildly ecstatic, and wise, poems themselves are of more interest.

In other volumes I have buried some surprises in the Notes. The four recipes at the end of The Essential Rumi, for example, the last two meant to serve 60 and 100 people! There are buried items here, too. On p. 487 I explain how I came to sign a book for President Obama, and on p. 484 I lay out the circumstances, as well as I can determine them, of Osho's death, which was very possibly a CIA assassination, a slow one by thallium poisoning.

In October, I gave a reading in Toronto with a Sufi group. Several were of Pakistani descent. They asked me about the intense Islamophobia loose in this country, that is particularly pointed against Pakistan. I acknowledged the truth of their question, but I begged for more time before answering. I'll attempt a piece of an answer here.

During the 1979 hostage-taking in the US Embassy in Tehran, Bawa Muhaiyaddeen (my teacher) called a news conference in Philadelphia with the world media, something he had never done. He denounced the hostage-taking, saying, this is not Islam. Did this happen after the destruction of the World Trade Center towers? If it did, I am not aware of it. Did the great Sufi Masters of Pakistan, and there are many, come forward in Karachi to say al Qaeda is not Islam? Have they in the 10 years since? I need to be educated in these matters. Have the Ayatollahs in Iran spoken out in this way? Has my friend Ayatollah Zanjani? I hope so. I hear there is a strong movement in Iran now among the young people toward Sufism.

(We could at this point, in all fairness, call upon our own leaders to acknowledge our very American violence. Two and a half million is one estimate of those killed in Vietnam. We exploded more ordnance in that war than was exploded by all sides in World War II. How many were killed in the First Gulf War? 205,000. In the March 2003 invasion of Iraq, which continues, and in Afghanistan? 919,967. Do we keep such records? Where? I googled these numbers. Nobody knows the true body count. If we could weep for much of what we have done, I feel the old Sufis would weep with us.)

Islamophobia is real and deep and widespread in this country. This much we can know for sure. I sat recently watching a baseball playoff game with a very well-educated man, who seriously recommended that we "Nuke Tehran. Hit them hard. That's all they understand. Like Dresden." Sheer Idiocy. I visited Tehran in May of 2006. I tried to describe that beautiful, gentle, European culture to him. Not much help. There is a lot we do not see. The lines of Islamic men bowing down, touching their foreheads to the ground, sitting back, standing up, bowing again. They are doing a form of prayer that acknowledges unity, not political or religious solidarity with each other, but in praise of the mystery of oneness within all living beings, all things, all molecules even. That is the essence of Islam that I meet in Sufis today, that I saw in Bawa's eyes. There is a sweetness and a coolness, a profound courtesy, and a peace in Islam that we are mostly blind to in the West, and in the media particularly. The Islam that Rumi speaks from within is not one that separates us into different religions. Amazingly, it is one that celebrates how we can meet in Friendship and sing One Song. Here is one of his most famous poems.

Every war and every conflict between human beings
has happened because of some disagreement about names.

It is such an unnecessary foolishness,
because just beyond the arguing
there is a long table of companionship
set and waiting for us to sit down.

What is praised is one, so the praise is one too,
many jugs being poured into a huge basin.
All religions, all this singing, one song.
The differences are just illusion and vanity.
Sunlight looks a little different on this wall
than it does on that wall
and a lot different on this other one,
but it is still one light.

We have borrowed these clothes,
these time-and-space personalities,
from a light, and when we praise,
we are pouring them back in.

He said that in the 13th Century. Rumi very consciously made himself and his poetry a bridge between cultures and between religions. There is nothing exclusivist about him. He includes everyone in his embrace. He was, and is, a healer of whatever might separate us. Shams Tabriz adds another, more incandescent, element to his gift. Pure freedom, pure internal wildness, beyond any category we know. The West has no one comparable. Thoreau to the 100th power. Dostoyevsky to the 10th. Cervantes times 40. Mark Twain spun into seven new dimensions. It is the whirlwind of his presence that we feel as the power within Rumi's poetry. Shams is what draws us.

I am often asked why Rumi is currently so popular. I give my lame reasons. The real cause is Shams Tabriz, the one so startlingly alive and awake, his face is "what all religions long for." That is the feel of the depth of their friendship. Such friendship is another quality we are missing about Islam. Rumi called his red book The Works of Shams Tabriz. He did that because these poems flow from their seamless friendship. And I would make the mystical claim that that is a way of being, of loving, that we can experience eight centuries later, a little taste of, by reading.

Rumi's Poetry: 'All Religions, All This Singing, One Song'
Rumi: The Big Red Book 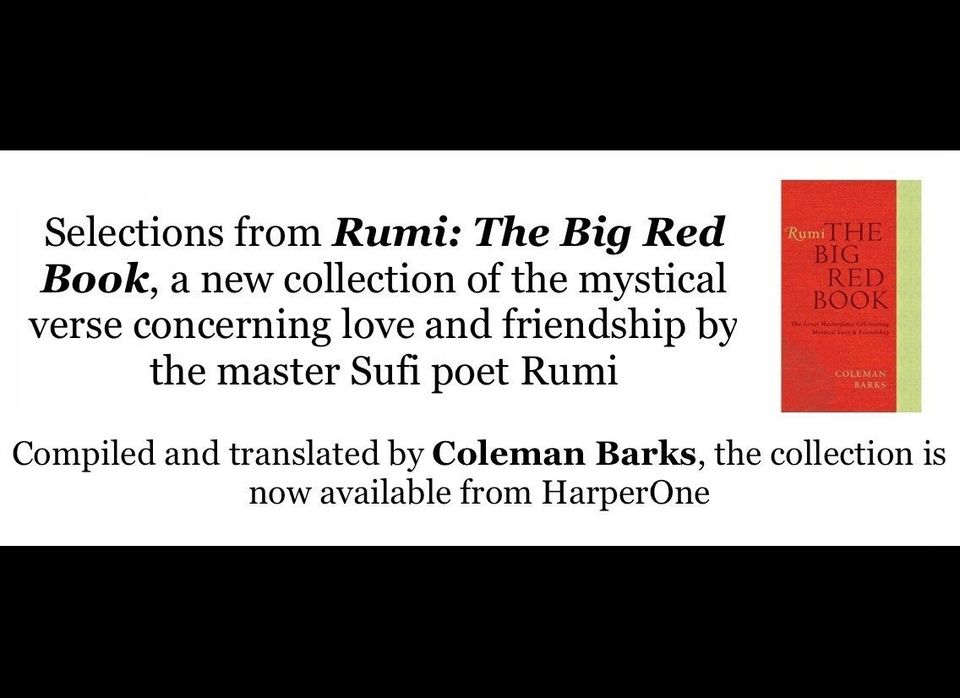