Recently, I visited New York to see an exhibition of Natvar Bhavsar's magnificent paintings at the Tower49 Gallery. Natu's wife, Janet, and I had taught art together in suburban Philadelphia when I first met Natu. The enclosed photo of Janet, Natu and me is taken in front of my favorite canvas of his titled,THEER-A-THEER-A. 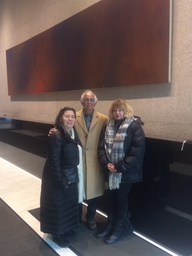 Tower 49 Gallery is displaying these splendid works of pure pigments, acrylic and oil mediums on canvas. Rang Rasa (Transcendent Color), is an exhibition of his luminous works shown until March 15. Spanning over forty years, the exhibition comprises seventeen large scale compositions on canvas and six works on paper. His technique of sifting and layering dry pigments over canvases laid on the floor was inspired by Rangoli, a festival ritual in which patterns are designed on the floors of interior and exterior domestic spaces. When Natu describes this process, he recalls memories of Holi, a Hindu holiday in which celebrants douse one another in water infused with brightly colored pigments.

Natu recently celebrated his 80th birthday, and upon reflection recalls, "I have engaged my last sixty years in the quest guided by an inner spiritual force and the requisite knowledge of my profession as an artist."

Natu, who was born in Gujurat, India, came to the U.S. in 1962. After a year of undergraduate study in Philadelphia, he was accepted into the graduate art department at the University of Pennsylvania. At this time he met my friend Janet Brosious who today is a skilled photographer and also has had museum shows celebrating her talent.

Today they live in lower Manhattan in a loft.

"Would you like to have lunch near Rockefeller Center," Natu asked as we proceeded to a tiny bistro nearby.

"Congratulations," I said to Natu. "Your work is mesmerizing."

"I wanted to see your show and some old friends, Heather Mac Rae and Geraldine Smith."

"Well, we're sure happy to see you. I remember Heather. Wasn't she in Hair," Janet asked.

After lunch, I returned to Geraldine's apartment in Manhattan Plaza where I was staying. A former Warhol superstar, Geraldine and I had a dinner with Heather who was in the midst of packing for a six week stint in Kansas celebrating Hair, in which she will sing her show stopper, "Easy to be Hard." In the middle of dinner another old friend, the author Paul Alexander, known for his biographies on Sylvia Plath, James Dean and Andy Warhol joined us. It felt good to listen to Paul and Geri reminisce about Andy. 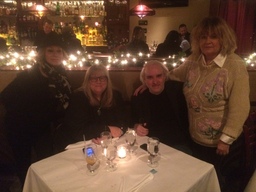 But it felt better to return to my cozy apartment near the snow covered battlefields of Valley Forge, now home.