Running is a mental sport. At times, negative thoughts can get in the way of a potentially great day on the trails and make it a mediocre one. You think, "I'm never going to get faster," "I'm a horrible runner" or "I'm way too tired for this," and suddenly every second placing one foot in front of the other becomes excruciating.

It happens to all of us. But there are some mental magic tricks that can help you take control of your thoughts, and manipulate them to actually improve your running. Yep, with your brain alone, you can become a better, faster, stronger runner. And best of all, you've got all the resources right inside your head -- no new equipment required. Try a few of these quirky strategies below and prepare to experience your best run yet. 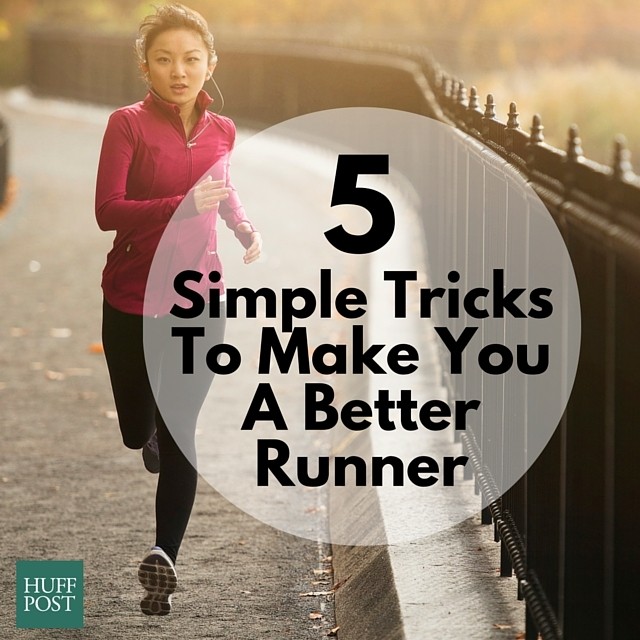 1. Focus on the finish line.
A new study from New York University showed that a little thought-tweaking can help athletes get to their destination more quickly. In the study, when walkers focused on the finish line instead of thinking about their surroundings, they were faster and perceived their distance as shorter. This mental trick is not just reserved for one sport; the study's authors speculate the strategy could work for any activity -- like biking, for example -- where you can focus on a marker in front of you. You don't need to reach the final finish to milk this approach for all its worth. Focus on mini-targets for the duration of your workout -- like a trash can or tree branch -- to break your sweat session into segments. It'll feel a lot more manageable.

2. Recruit some fans.
A study published in Frontiers in Human Neuroscience found that looking at positive visuals, like encouraging words and happy faces, helped exercisers workout for longer and feel like they were using less energy. Beyond providing moral support, the dedicated fans who hold up signs and cheer for their race-running pals may actually be helping them get to the finish line.

3. Talk to yourself.
You might look a little crazy, but it won't matter because you'll keep your pace while other, silent runners will be fatigued. According to Runner's World, a good mantra is one that's "short, positive, instructive, and full of action words." The repetition of strong, uplifting words could be the boost you need to stay afloat mentally; after all, any runner knows that getting down on yourself in your own head is a surefire way to have a bad run. Runner's World says that besides strong legs and lungs, you need a "strong head" to keep on running: "Doubts and distractions can derail your attempts, but a well-chosen mantra can keep you calm and on target."

4. Don't confuse mental fatigue for physical fatigue.
A study published in the Journal of Applied Physiology found that mental fatigue can impair physical performance. Two groups completed a high-intensity cycling exercise, and the group that engaged in a mentally-draining activity beforehand performed worse compared to the group who had done something emotionally neutral. The mentally-drained group perceived their workout as much more difficult and quit much sooner. This experiment emphasizes the fact running is a mental battle. But, as Runner's World writes, "it is possible to [...] fool the mind into allowing the body to work harder." Just acknowledging that your exhaustion might be coming from your head could help you power through.

5. Incentivize your run.
This last trick does require a little cash, but if you do it right, you could be increasing your bank account balance and your weekly mileage. While money can't buy happiness, it might be able to motivate you to keep on trekking. A 2013 Mayo Clinic study found that people were more likely to stick with their weight loss program if they had financial incentives. These people also lost more weight than those who went unpaid. An earlier study published in Econometrica found that people who were paid $100 to go to the gym doubled their attendance rate. Apps like Pact has users commit to a healthier lifestyle (through diet and/or exercise). When users goals are met, they are rewarded with cold, hard cash. When a user fails to complete his or her goal -- say, running 30 miles a week -- the user is charged.