There have been several stories which suggest that Secretary of State Hillary Clinton should be the Democratic nominee for president in 2012. More curiously, there are stories which imply she could win a hypothetical Democratic primary versus Barack Obama, or general election versus nearly all of the current GOP candidates.

The calls for opposition to Obama's presumed nomination are not just about Clinton. Ohio congressman Dennis Kucinich suggested Obama should face a more progressive primary nominee because it would make him a better candidate; even if, as Kucinich acknowledged, Obama would probably win. More calls for opposition to Obama's unchallenged nomination have come from Princeton Professor Cornell West, and consumer advocate Ralph Nader.

Of course, Clinton would not run (i.e., doesn't want to), nor would any other Democrat in good standing because such a prospect would splinter the Democratic Party and likely lead to the demise of Democrats for years to come (i.e., we've seen this bad idea before). However, there is a real question about which Democrats in the electorate believe that Obama should not be re-nominated?

The reporting on Clinton's prospects speculates that she could win the disheartened progressives/liberals who are dissatisfied with Obama, or at least garner the votes of women in the party. Moreover, there's a broader narrative that Democrats have buyer's remorse and just want someone different in the White House.

However, these opinions simply don't match up to data from polls asking Democrats if Obama should be re-nominated as the party's candidate for President. I examined nine CNN/ORC polls where the full data sets were available from the Roper Center's iPOLL public opinion archives. Each of the CNN polls asked Democrats, and Independent leaning Democrats, the following question:

The results from these polls are in Table 1. 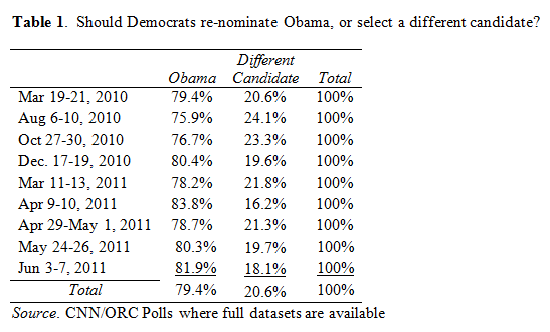 When given the opportunity to display a preference for a different Democratic candidate--any "different candidate"--overwhelming majorities of Democrats report that Obama should be re-nominated by the party. CNN/ORC polls conducted between July and September of this year show the re-nominate number ranging from 70 to 77 percent; however, the most recent results from an October 14-16, 2011 poll mirror those from the June 2011 poll; about 8 in 10 Democrats say Obama should be re-nominated. Thus, there is not much public support for opposition to Obama's automatic re-nomination.

Yet, there are still segments of the party's affiliates who report that a different candidate should be nominated instead of Obama. Who are these segments?

When the poll numbers above are disaggregated into categories of self-reported political ideology, education, race, age, region, and gender, it is possible to identify whether there are insurgent groups of Democrats who want to unseat Obama, or at least some target audience for the dramatized stories about Obama's demise within his own party.

There are two ways to examine the numbers that follow. First, one can look at the trend in opposition to Obama's re-nomination; an increasing trend would signal growing opposition to Obama. Second, one can look at the differences across the groups being analyzed; greater differences signal more disagreement among the demographic groups about Obama's re-nomination. 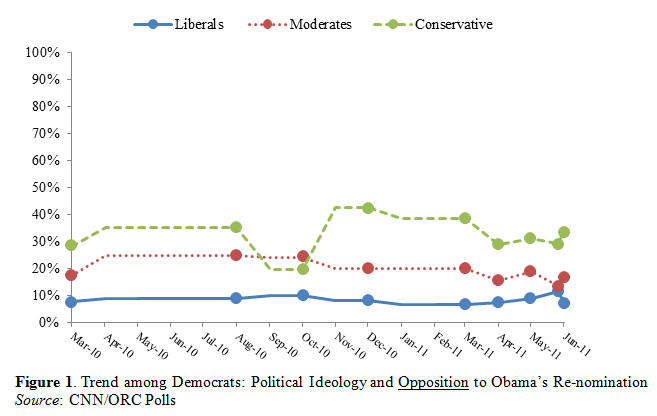 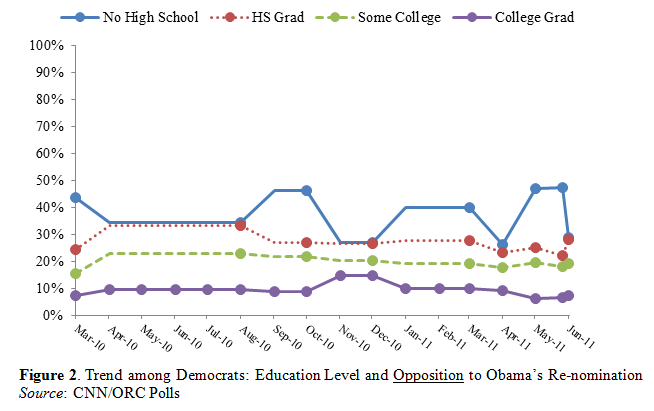 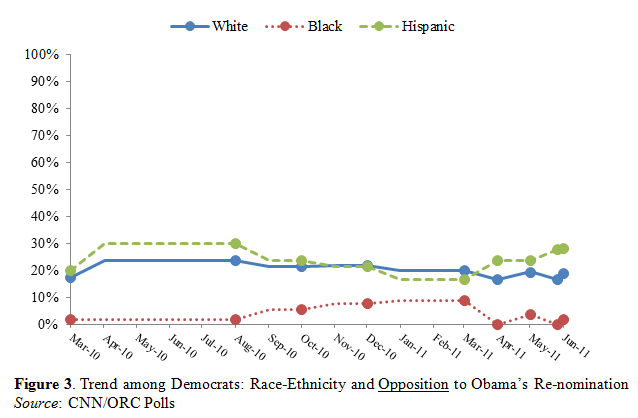 While a number of stories have highlighted Obama's willingness to change Social Security by raising the age levels for eligibility, this does not appear to have affected support from the senior segments of Democrats. Also, it does not appear that another staple of Obama's 2008 election base, younger voters, have decided that some other candidate should be nominated instead of Obama. In general, there is no groundswell of disagreement about Obama's re-nomination among the age groupings of Democratic identifiers. 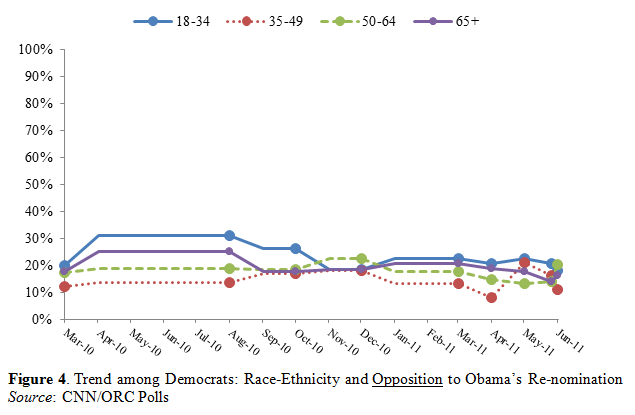 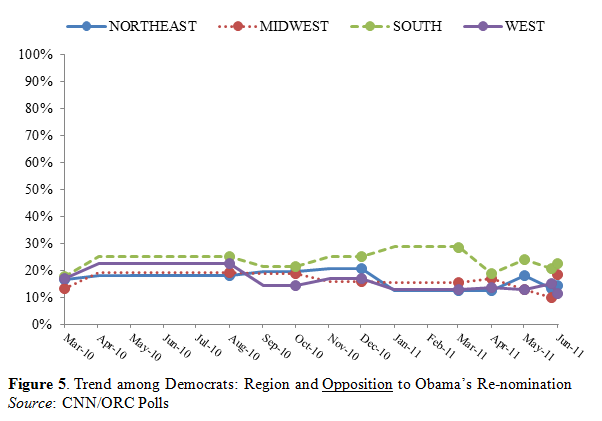 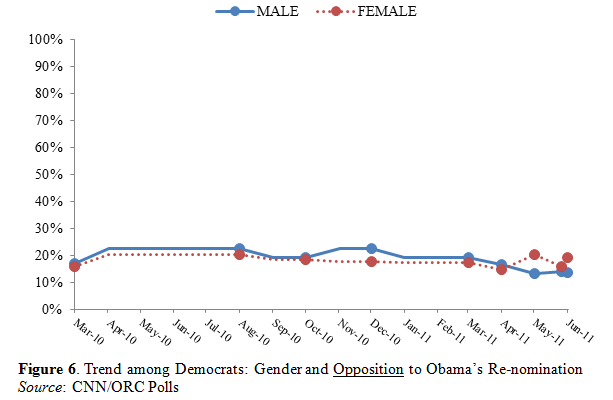 It is difficult to gauge the intent or merit of stories positing the "Run Hillary Run" narrative. Few of the CNN/ORC polls containing the "re-nominate Obama" question, also have questions related to Hillary Clinton. Those polls that do have shared questions show no strong pattern of movement away from Obama. That is, there is no consistent evidence that love for Hillary translates into disaffection for Obama.

For example, a March 11-13, 2011 poll (see Figure 7) found that 82 percent of those with a favorable view of Clinton report that Obama should be re-nominated, and those with an unfavorable view of her are more likely to say Democrats should choose a candidate other than Obama. This exact same pattern exists in the October 27-30, 2010 CNN/ORC poll. Such a result suggests only about 18 percent of Democratic identifiers who like Clinton believe Obama should not be re-nominated. 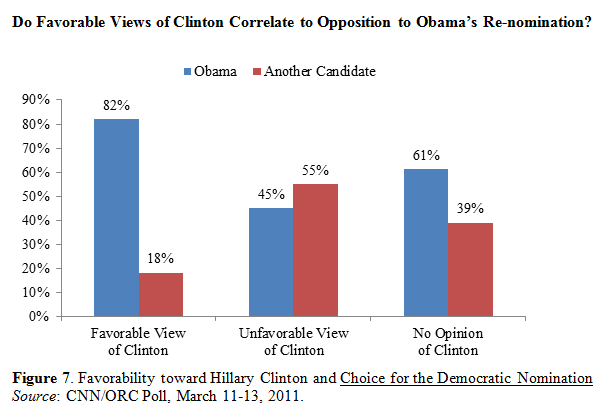 No Real Democratic Opposition for Obama

While stories about Obama losing his base support appear to make for intriguing media play, there is no robust polling evidence that Democrats are defecting from Obama en-mass; at least, not in terms of a desire to have Democrats nominate someone other than Obama. There do appear to be some segments among Democrats who are more likely to favor someone other than Obama as the party's nominee. Conservatives, those with lower levels of education, and Hispanics are each among the groups most likely to report lower support for Obama's re-nomination. Yet, these numbers do not reach the level of majority status among any one group.

Some may argue that having 20 percent of your own party agreeing with the idea that someone other than the incumbent president is the best nominee, is a problem in an of itself. However, that number was 32 percent for Bill Clinton in November of 1994. I guess, it's all relative.

There's no doubt that some Democrats "express" disappointment with Obama, but that doesn't always translate into disaffection, or a standing belief that there's a Democrat who can do better. The key problem for Democrats is enthusiasm, they didn't mobilize the base in 2010 and wound up losing the redistricting authority (...again) as well as the power to make laws. Obama at the top of the ticket will change how the 2012 general election is framed, as well as how Democrats view the the energy in the own party.

Obama is a seasoned and well-vetted candidate with a strong on-the-ground GOTV and campaign operation, and an even stronger fundraising record (literally and figuratively). While the economy is an issue, Democrats in the electorate should be aware of the fact that since the GOP congress was sworn in at the end of January 2011, unemployment has actually increased and consumer confidence has declined (sorry, I hope I didn't give away a 2012 general election narrative). Prior to this congress' swearing in, unemployment was on the decline and confidence was steadily moving upward.

For those who desire to see another Democrat rise from the ranks to take on Obama, sorry to disappoint, but it's just not going to happen. However, the chances of another Democrat winning in 2016 increase dramatically if Obama is reelected.