Now appearing an eight-hour car ride south from the Strait of Gibraltar along Morocco's coast is North Africa's largest new mural. Given its proximity to the eight-mile Africa/Europe divide, the new painting by the London-based Italian Street Artist named RUN addresses the multiple immigration crises that are unfolding before our eyes.

"You could identify one figure as European and one as African but I like to think of it in a more universal perspective because migration is an issue worldwide," says the artist Giacomo Bufarini (aka RUN) of his enormous metaphorical piece in Essaouira just a few hundred meters from The Atlantic. 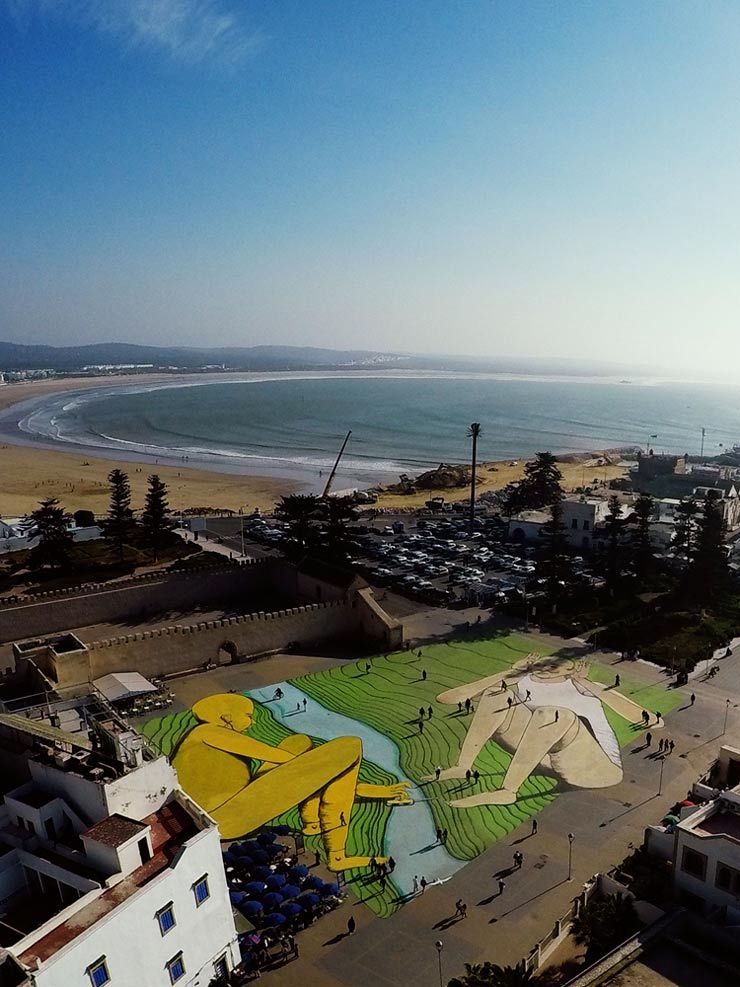 "First of all I could not avoid thinking about Europe and North Africa and all the stuff that is going on with immigration and all the refugees. So I created two continents divided by the sea, or a channel. But those two continents could easily be Mexico and America, they could be China and Mongolia - they can be across with any border.

Realized in conjunction with the MB6 Street Art project that runs parallel with the 6th Marrakech Biennale this year, this 6,400 square meter public art piece features two figures communicating with music as the intermediary.

Video by Gastone Clementi RUN says the regional Gnaoua World Music Festival held in this city for almost two decades provided the inspiration for his theme - not least because this square is one of the multiple sites where hundreds of thousands of fans annually enjoy the often-hypnotic music produced by the pizzicato sounding 3 string bass called Guembri (الكمبري) or sintir (سنتير‎), a camel-skin covered wood instrument that is closely associated with the culture of the Gnawa people. 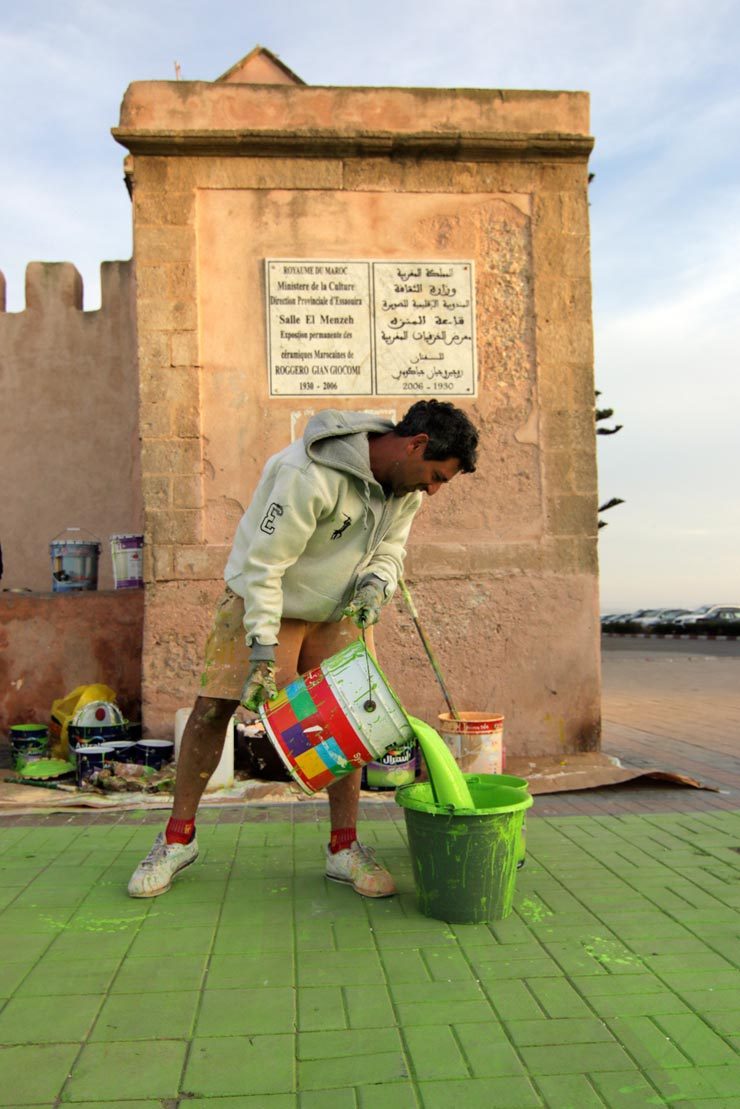 In the new video that documents the project, RUN features two musicians who appeared on the square during the 7 day installation, which required 280 liters of paint and 4 assistants, including one speaking to him on a walkie-talkie from a balcony above the square, verbally directing RUN's brushwork.

Accustomed to doing almost all of his painting himself and moving fast, RUN divulges that the scope of and the concomitant complications of this week-long "performance" tested his maturity as a person and, somewhat surprisingly, he says that he discovered that he can be very patient. 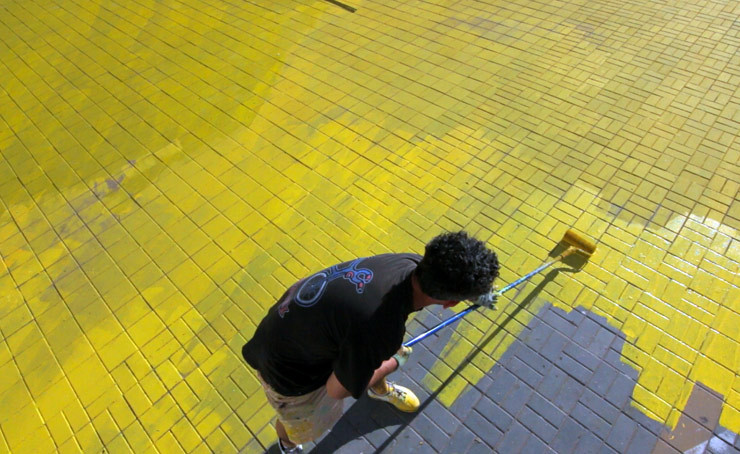 "I discovered all of my patience with humanity. I am so fucking patient, and I love it," he says, laughing, and explains that he treaures the personal interaction with passersby.

"Actually I get really stressed when I am in London and I paint and nobody stops to look, and here many people stop. I mean how many people do you see up on a ladder painting? When they don't stop it's frustrating to me. I mean, come on! Stop! I'm doing something special. I'm not wheat pasting an advertisement on the wall. I don't know, just stop. Why not? The performance is important."

Speaking of logistics, he notes that he could not consult the camera work of an overhead aerial drone, a tool that many artists have recently adopted to assess the progress of their large scale public works.

"I never was able to do it because the only day that I had a drone was just before I left the city so by then everything was already done." Since this was his largest mural ever and difficult to gauge, he was hoping that his work was in proportion. "I was crossing my fingers to hope that when the drone went up and we were looking at this little monitor to see what we were doing, I would be happy." 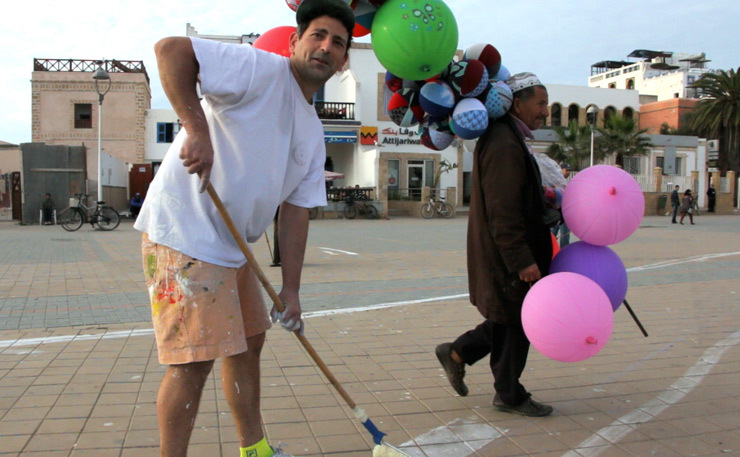 He thinks the next time he tries a project like this he will do something geometric. Using reliable measuring devices literally on the ground, RUN says that mathematics will be 90 percent of the next piece, with only a little bit of improvisation, and no need for a drone or someone standing on a veranda above him describing what they see.

"In this case mathematics was important but I had to improvise a lot. There was no other way. I was trying to imagine my eye over top of it and to see what I was doing," he says. "It was hard - it was really tricky. I think after the 6th or 7th day I was feeling like, 'Oh my god the painting is winning!' "

Brooklyn Street Art: Well as a Street Artist you are always making adjustments; according to the scale of the wall, or the audience, or the weather or the materials...

RUN: Exactly, this it the nature of art in the street. You have the control over what you are doing only to a certain degree. Then the weather, the social situation, the place...anything can alter it. 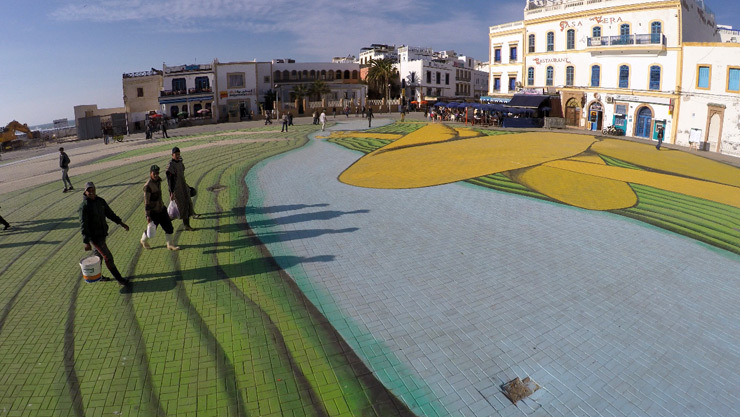 With all the labor you have put into this mural - your preconception, your philosophy, and the actual execution - does it bother you that it is being destroyed as well?

No, that was the deal from the beginning. I am precious about pieces that I do on the street, obviously. But I also know that I do not have control over it from the moment that I start.

So that sense of perspective comes from your personal history and the work you have done in graffiti and street art over time.

Of course, I think that each artist who works on the street wants to have a piece that stays on the street for 50 or 100 years. And maybe that will happen with some of my pieces on the street that are somehow protected by the laws of nature and the randomness of the city. I'm not talking about the scenario where people will try to put a piece of plexi-glass over it. I don't care about that. This piece was meant to be destroyed. This is the nature of this piece. It has to go. I think that the performance is more important. 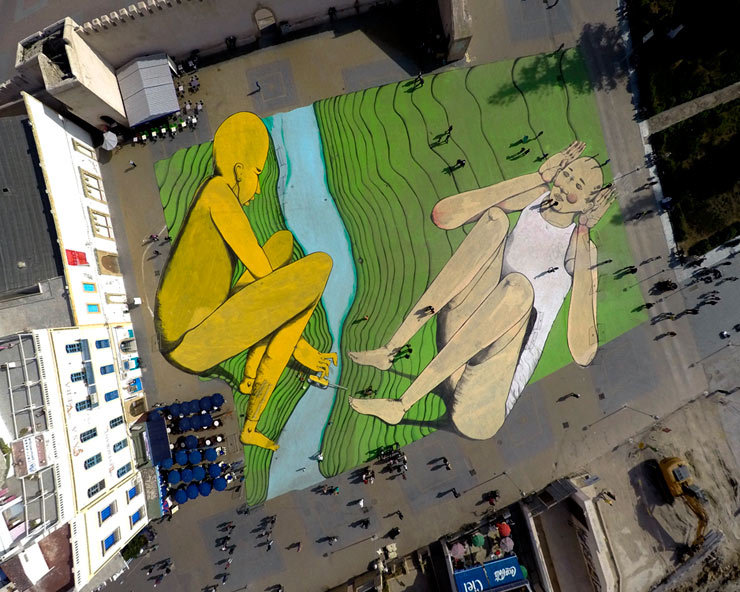 Our coverage of MB6 Street Art at the Marrakech Biennale is BSA in Partnership with Urban Nation (UN).