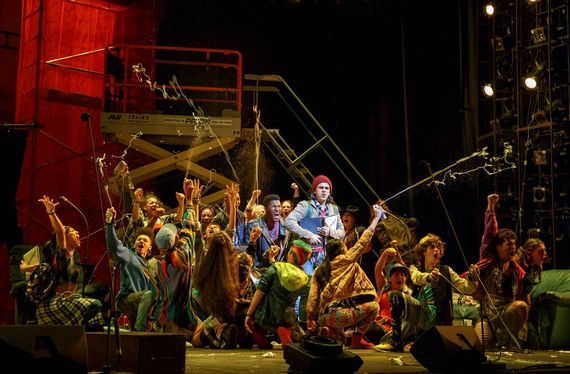 At the end of the performance, large handwritten letters were held up by cast members spelling out: THANK YOU, LIZ! I want to also add my thanks to Elizabeth (Liz) Swados who wrote the book, music and lyrics for Runaways way back in 1978 and was the creative engine of the project. Now in 2016 it is still relevant, entertaining and thought provoking.

It is sad that Swados, who died this year, was not able to witness this wonderful production of her theater piece. "Theater piece" is the appropriate nomenclature as it includes so many aspects: part social commentary, part devastating drama, part comedy, part musical entertainment, and a riveting platform to showcase a group of extremely talented young performers. The cast was made up of twenty-five teenagers, ages 12 to 19, who were various sizes, shapes, ethnicities and hues; some of whom have had Broadway experience, some were found in a recent open casting call. They could individually belt out a song diva-style, knock you over with a scree of indignation, quietly upset your equilibrium, make you laugh, make you cry, make you angry, and make you wish that you could right the wrongs that too many kids have endured. (They also made me feel blessed that I was raised by kind, decent people.) At the end, when all the youngsters sang about wanting to be a kid before they get too old, I almost broke down weeping.

The piece began with a deaf teen signing her story (while another person spoke her words). (Remember this was presented over 30 years before the recent Deaf West's production of Spring Awakening.) Sometimes the signing was used as movement. Ani Taj created the casual-looking choreography: there was skipping, running about and jumping around that seemed like playground games or ways that ordinary, energetic kids would move. The costumes (by Clint Ramos) looked like the thrown-together, layered, multi-patterned outfits worn on most city streets today.

The seven-member ensemble was visible onstage (led by Chris Fenwick) and provided the solid musical backing unobtrusively. The scenic design (by Donyale Werle) consisted of old broken-down sofas and various props indicating the low-rent, vagabond lifestyle of some of the kids.

Whether in spoken word, signing or song, each story builds to tell a harrowing description of abuse, neglect or violence that explained why the teen chose to run away from home. Like Michael Bennett who had used interviews with dancers to create A Chorus Line, the basis for Runaways are the interviews Swados conducted with teens who had run away, and then developed the piece in workshop style (at the Public Theater) with the original cast members.

Briskly directed by Sam Pickleton, (who had been able to consult with Swados before she died), the piece developed power through the accretion of its various elements. It is non-linear, with no defining plot, but it was an involving, emotionally charged, heart-wrenching and ultimately uplifting, cathartic experience.

Reviving Broadway and Off-Broadway productions in the Encores! and Encores! Off-Center series is a wonderful gift to those of us who were unable to see the original productions. I applaud City Center for providing the opportunity for a few audiences to see Runaways and I would urge a savvy producer to bring it back for a longer run, either on or off-Broadway, so that others may see and experience it too.
________________________