Prior to this past November, the last time I ran against a clock was in 9th grade, when all students had to run one mile for a gym class requirement. Four laps around the outdoor track within a predetermined time. I despised that requirement with the heat of 1,000 suns and willed myself to be sick that day so I could postpone. (Spoiler alert: It didn't work.)

Historically, I've blamed my distaste for running on two things: my genes and asthma. Neither of my parents was big on long-distance running, though they did and do participate in just about every other physical activity invented, from skiing to Rollerblading to paddle boarding. And the asthma occasionally made it hard to breathe -- which, you know, can be problematic.

Growing up, I competed in activities where running, by my definition, meant a (very short) jog around the gym as a warm up. When I arrived in New York in my mid-20s with few funds for a gym membership and a schedule that made organized activities complicated, I decided I needed to "learn how to run." Because I could run anywhere. Because I longed for the legendary runner's high. Because I heard it was a good way to de-stress and stay healthy.

And because I wanted to be able to call myself a runner. I revered runners. When they used to brush past me on the sidewalk, the sound from their headphones barely audible over their huffing, I'd wonder what in heaven's name what kept them going -- voluntarily, with no coach on the sidelines shouting motivational lines or teammates piling on the pressure. Getting up on a Saturday morning, lacing up my shoes and going for a run in Central Park (and not loathing every single millisecond of it) was something I wanted in my life, for reasons I couldn't fully put to paper.

So nearly 12 months ago, for my New Year's resolution, I decided I would not just "learn to run" but also complete a 5k race before the ball dropped on 2013. I then forgot about that resolution for a solid few months. Pretty standard, as resolutions go.

This time was different. I'd recently been diagnosed with various food allergies and revamped my diet. I had more energy. No more chronic stomachaches. Each jog became progressively easier and at the same time challenging enough to keep me feeling accomplished. Hearing the app's monotone voice announce I'd completed the day's workout made me feel like tossing my hands in the air in celebration. The day I first ran for 10 full minutes without stopping you'd think I'd won an Olympic medal.

I think the running gods knew I needed an extra push (read: supportive hand-holding) to commit to an actual race. Enter Sarah Klein, associate editor for HuffPost's Healthy Living section, and the 2012 Race to Deliver. She knew I was working on my running "education" and asked if I'd join her team.

The race was three months away. Just the right amount of time. I paid my fee and marked the date in my planner. Later, I realized I'd signed up for a four-mile race, about one mile more than my 5k goal. Maybe I could use that bonus mile to make up for past New Year's resolutions that'd fizzled by February.

With the weather growing cooler the weeks preceding the race, I checked in with my doctor. I have cold urticaria, and if I get too cold my skin reacts and my asthma worsens. I wasn't too worried, but I dreaded the first frustrating wheeze that could make me have to stop the race -- that was so not happening. We discussed preventative measures, and the excitement returned.

Race day was a chillier one: not quite 40 degrees in Central Park (and with a bit of wind, it felt colder). My strategies? Don't speed up. Drink at every water station. Keep your inhaler on you just in case.

One second I was chatting with a teammate as our group neared the start line. There was a guy on a loudspeaker talking about what I'm sure were really important things over a collection of Top 40 music. And then people were running. And then I was running. And I was reminding myself to not speed up. And I was checking my heart rate monitor. And I was hiking my pants, which suddenly decided to be a size too big and not want to stay around my waist. And I was running a race. In Central Park. (It was a Sunday, not a Saturday like in my daydreams, but we'll let that slide.) And there was no wheezing.

My main goal was just to finish the race, with no self-judgment if I had to stop and walk for a stretch. But really, I wanted to run the entire time. I only slowed when grabbing a cup from the water stations. At the first station I tried to be awesome and keep jogging as I drank, and as a result very chilly water sloshed down my face and jacket. Smooth. My teammates (much more pro at this running thing than I) assured me afterward this is a normal practice and those brief few seconds of walking did not count.

Ever wonder how slow a person can go and still consider themselves running? Really. Slow. At times my running was the same pace as others' speed walking. But going fast was never the point.

Instead of increasing my pace on the downhills to make up time, I instead let up to give my legs and lungs a chance to recover. A few times I wondered whether I could make it -- the finish seemed so far away. I'd been to Central Park plenty of times, and never before did it feel so huge. In those moments the volunteers clapping and ringing their bells alongside the course were godsends.

At half a mile to go, I knew I'd done it. And I felt proud. Maybe it's vain to say that. So be it. I abandoned part of my strategy and sped up slightly so I could finish strong.

I wish I could say something poignant about how in that moment, as I rounded the corner on the last stretch, I reflected on the past few months and all I'd accomplished; in the beginning, I could only run for about 30 seconds without pausing. But in truth the only thing going through my head was: I am so happy.

I crossed the finish line smiling. 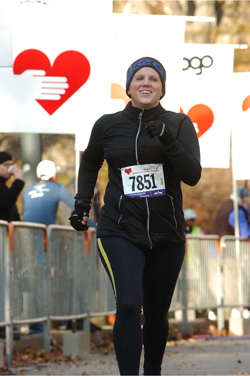 The text message came later that afternoon, after a (well worth the cost) cab ride home, warm shower and gloriously-long nap:

"Congrats! You're a runner!"